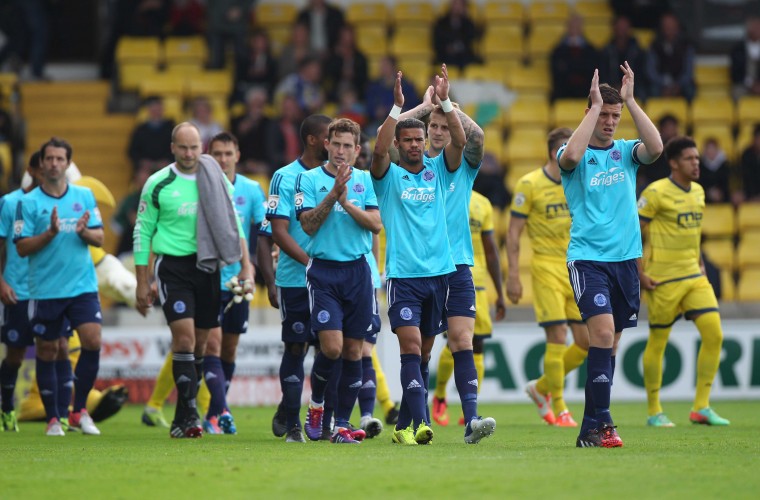 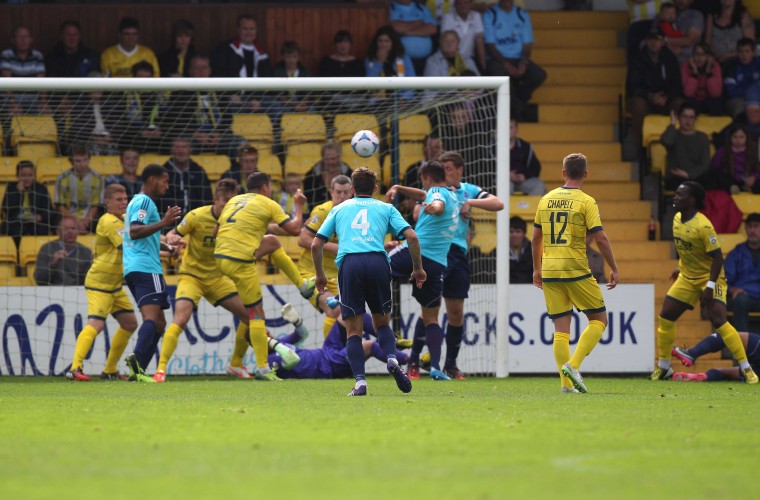 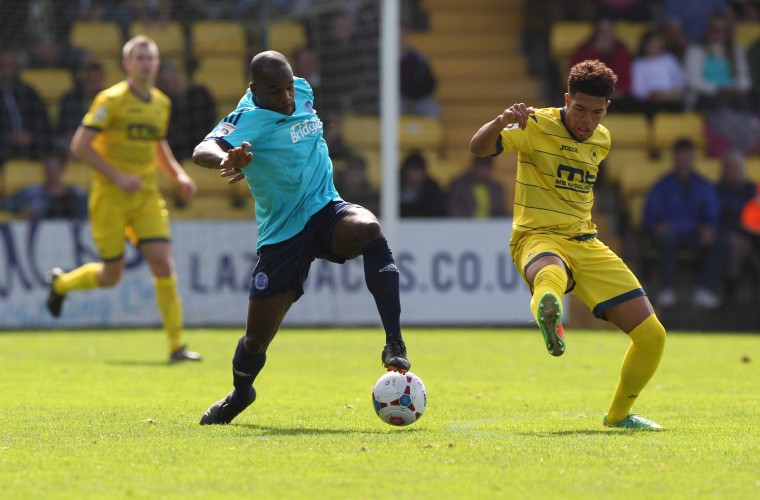 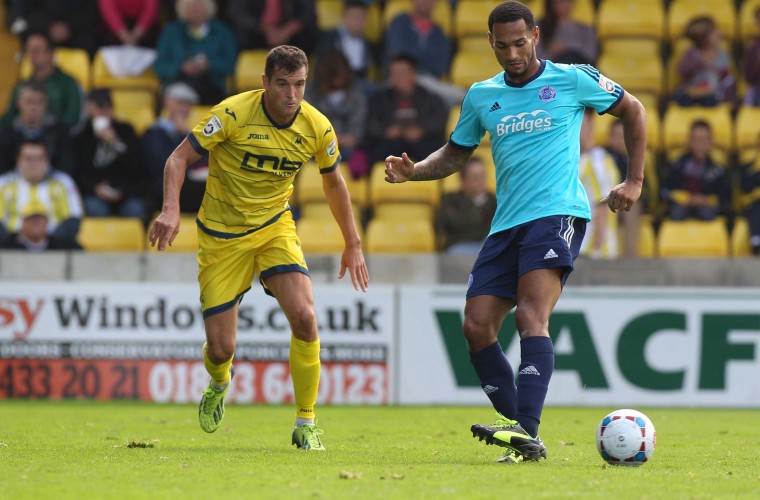 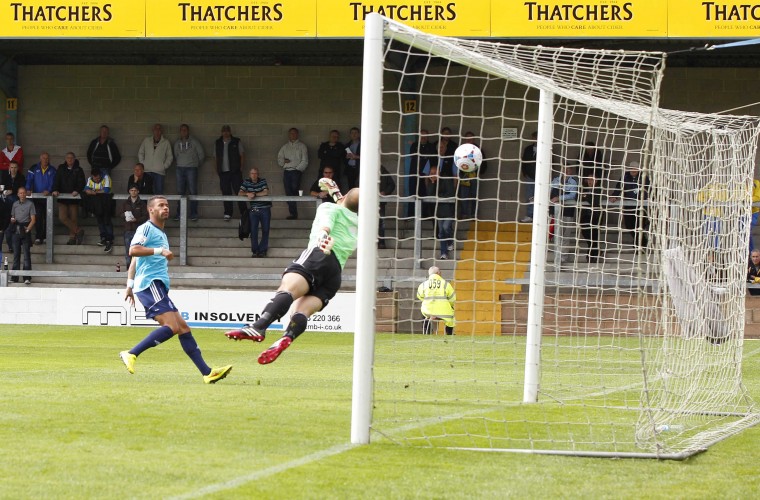 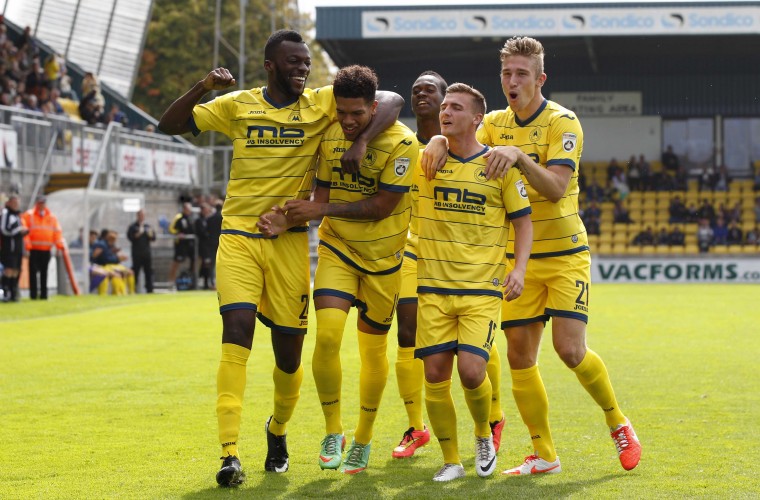 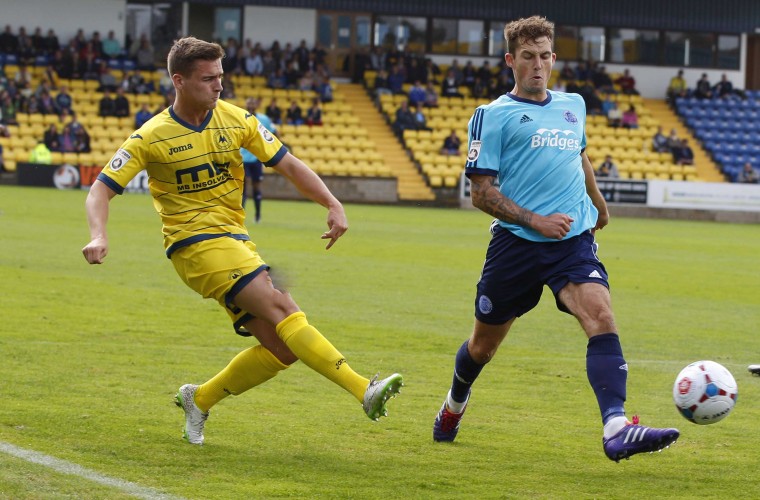 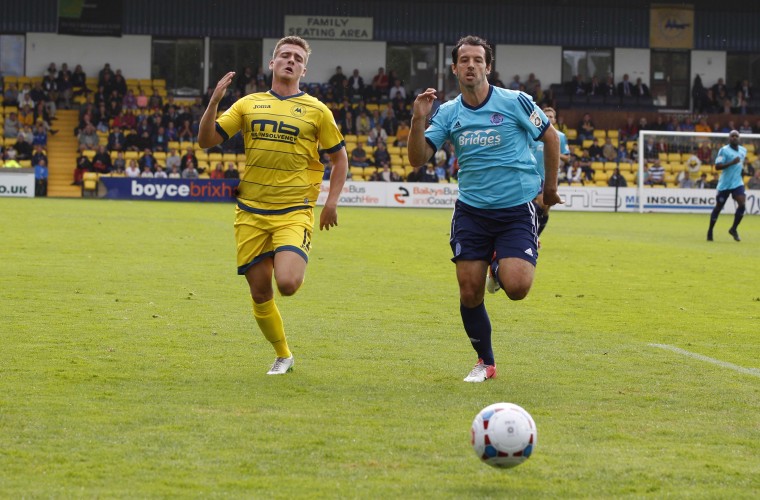 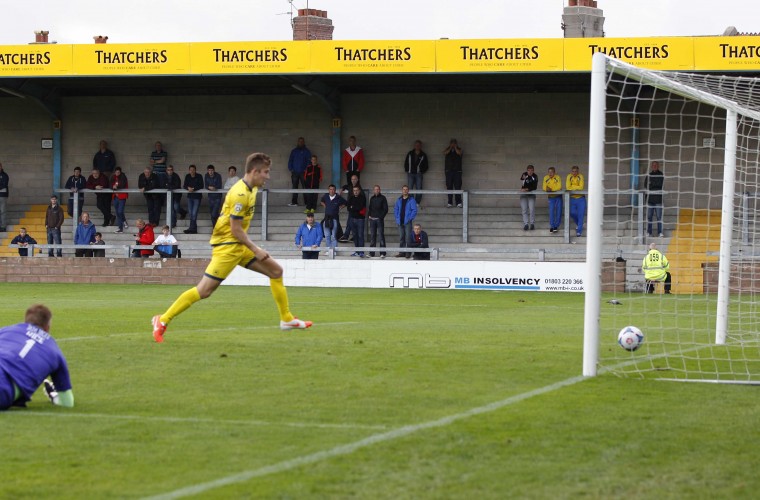 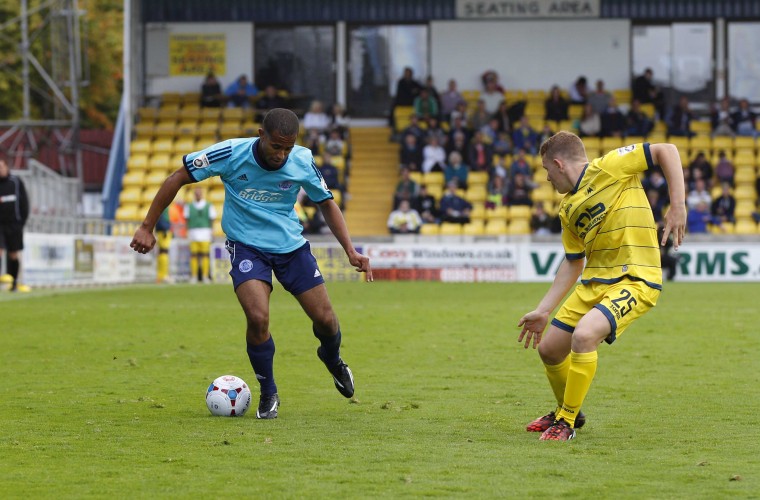 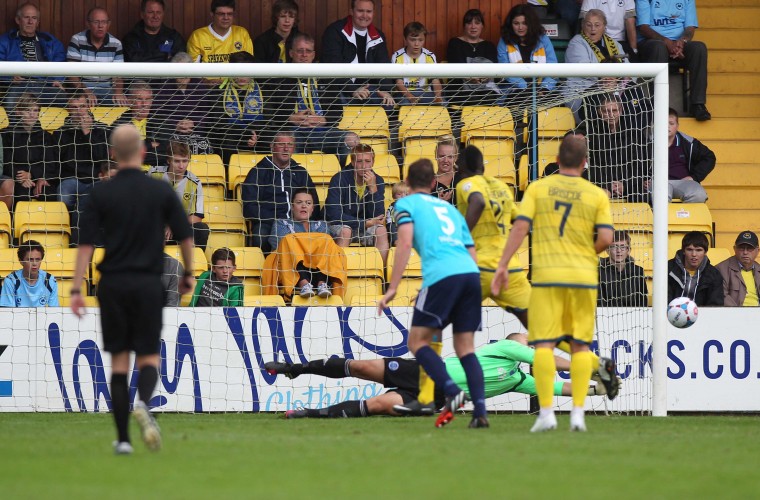 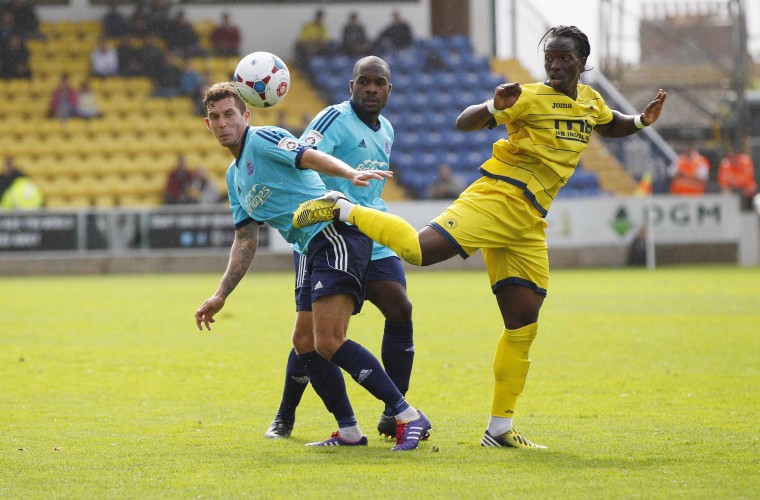 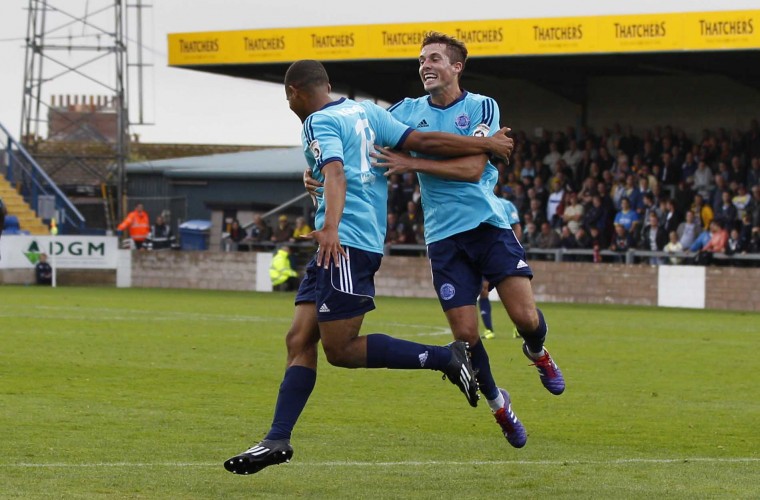 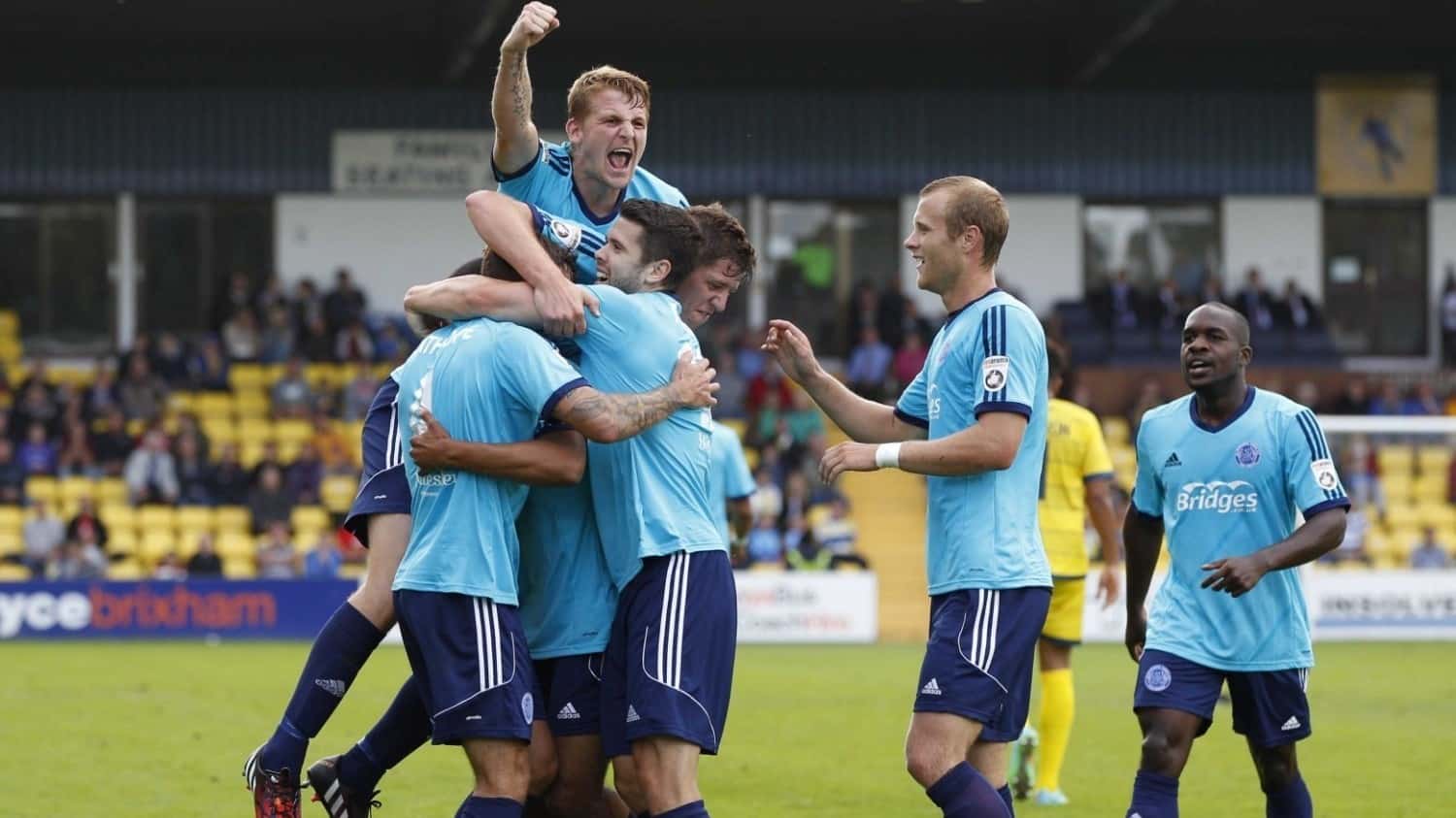 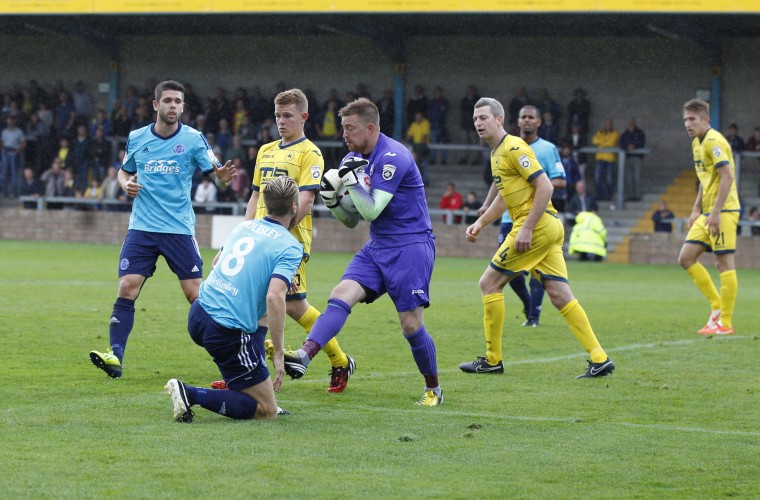 Joe N’Guessan’s second-half strike snatched a deserved draw for The Shots at Plainmoor.

The substitute coolly slotted an angled shot underneath Martin Rice as the visitors recovered from the early setback of Courtney Cameron’s third minute free-kick to earn their second point of the Bank Holiday weekend.

Andy Scott had made two changes from the side which started against Forest Green Rovers, as Kieron Forbes returned to midfield in place of Mark Molesley and Anthony Tonkin continued at left-back after Chris Barker’s calf injury.

Amidst a lively, open start in which neither defence looked entirely comfortable, Torquay took the lead with the game’s first chance on three minutes. Cameron swung in a free-kick from deep which appeared to carry little threat but was somehow allowed to bounce inside the box and skid past Smith on its way in at the far-post.

Both sides were finding space with pacy counter attacks and after Forbes slipped a pass through the Williams, his 25-yard shot was scuffed wide. Rice then failed to claim Hatton’s corner and, in the next move, Roberts pulled his shot across goal.

On 13 minutes, after Downes was booked for a late challenge on Scott near the touchline, Hatton’s delivery to the near-post found Williams in space but, with Rice rooted to the spot, his flick flew wide of the post.

Hatton was then required on defensive duty, blocking Cameron’s shot after good work down the right by Chapell, and then making a crucial stop inside the six-yard box to stop Ofori-Acheampong slotting in from close-range as Ajala broke free and cross from the left.

In between, he had popped up on the Torquay six-yard line to meet Oastler’s free-kick with a nod-down which Scott was inches away from touching in.

The lively Ofori-Acheampong soon drew a strong save from Phil Smith with a 25-yard drive, and Smith was again his equal on the half-hour, with a smart stop from his shot on the turn.

The final 15 minutes of the half remained open and full of purpose but the only opportunity came in injury time, as Hatton whipped in a free-kick which anticipated Williams’ run across the face of goal, only for the glancing header to fly wide.

The second-half, too, began with little penetration, as both sides perhaps recognised the folly of their initial endeavours. Young’s low, skidding 35-yard effort was the only chance of note, but with the arrival of Fitchett and N’Guessan and the switch to left-back for Jordan Roberts, The Shots steadily began to rediscover their cutting edge.

Scott’s instant chest control and turn saw Rice punch his 30-yard snapshot away from goal, and Roberts’ teasing cross narrowly evaded Scott, Fitchett and N’Guessan on its way behind. N’Guessan then touched the ball wide after Hatton’s long throw was inadvertently flicked on at the near-post, but soon, on 71 minutes, he finally got his reward.

Chasing a long pass down the right flank, and abetted by the strength and movement off the ball of Fitchett, which created crucial space, the Stevenage loanee bore down on goal to slide the ball between Rice’s legs to spark delirium behind the goal.

Suddenly it was The Shots who sensed a winner, but United remained a threat on the counter-attack. Roberts showed his defensive qualities with a fine block on Cameron’s shot and Smith was alert to save Young’s ambitious 35-yard free-kick.

The game opened up again in the last five minutes. Molesley stretched to meet Roberts’ cross but could only loop a header straight at Rice, and Wakefield produced a virtual air-shot as Chapell, aided by a fortuitous ricochet off the corner flag, chased down Briscoe’s pass and crossed low into the centre.

Chapell then lobbed the ball wide of goal after Smith came to the edge of his box to punch clear and, in the final minute of stoppage time, Molesley’s opportunist effort was blocked to ensure that the points were shared.