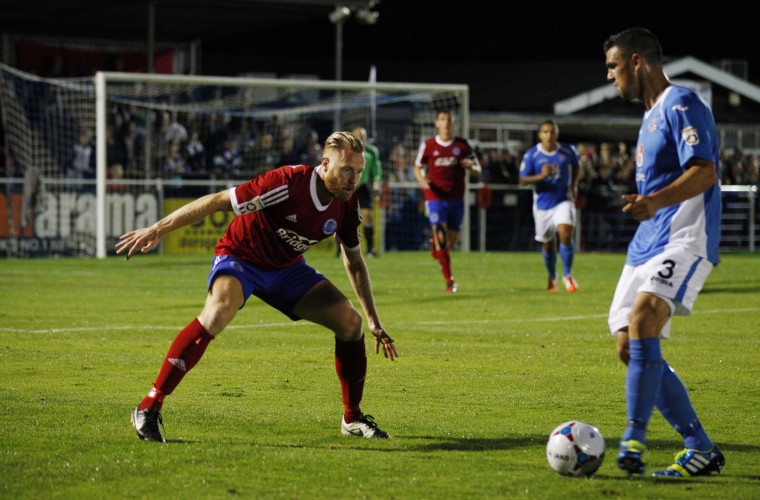 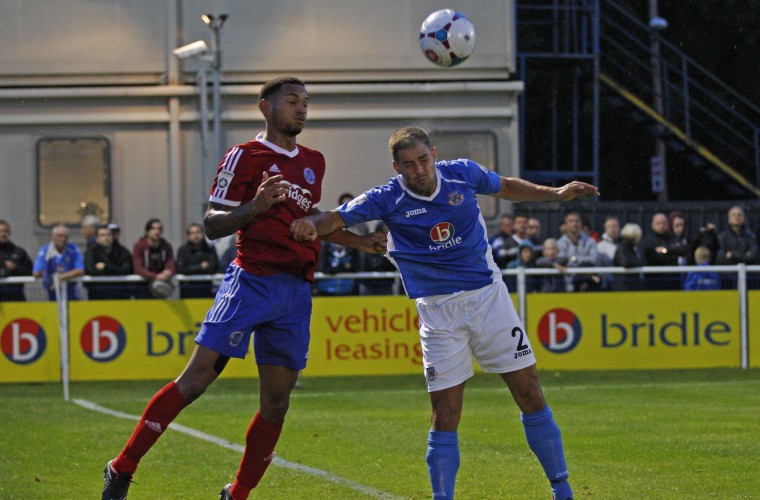 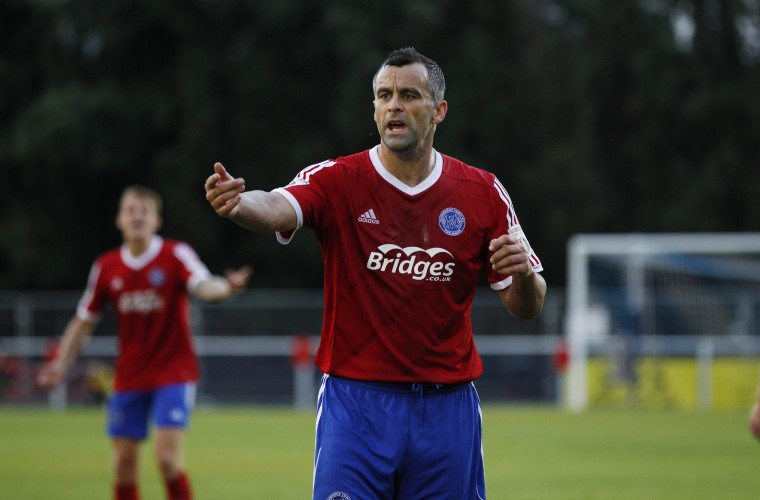 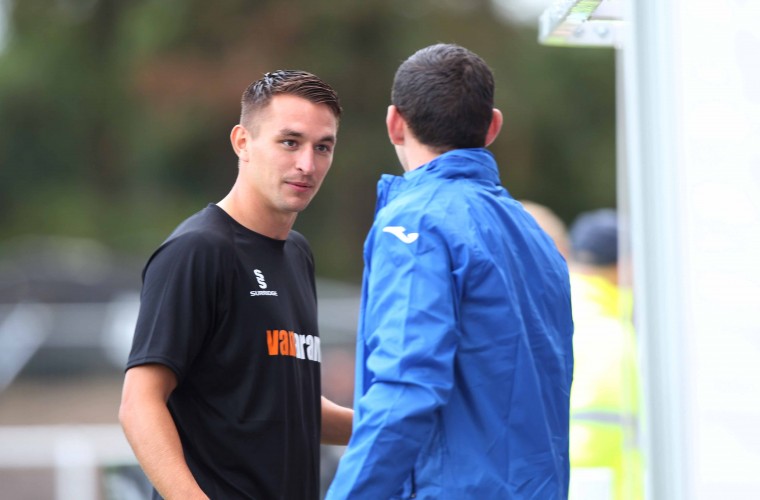 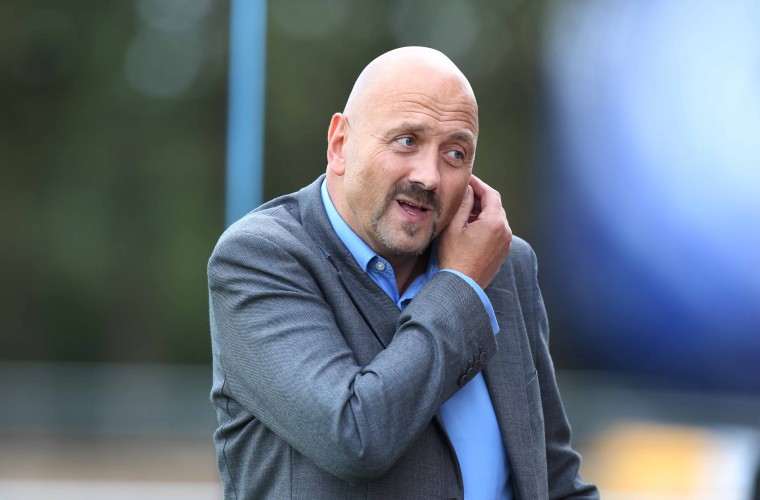 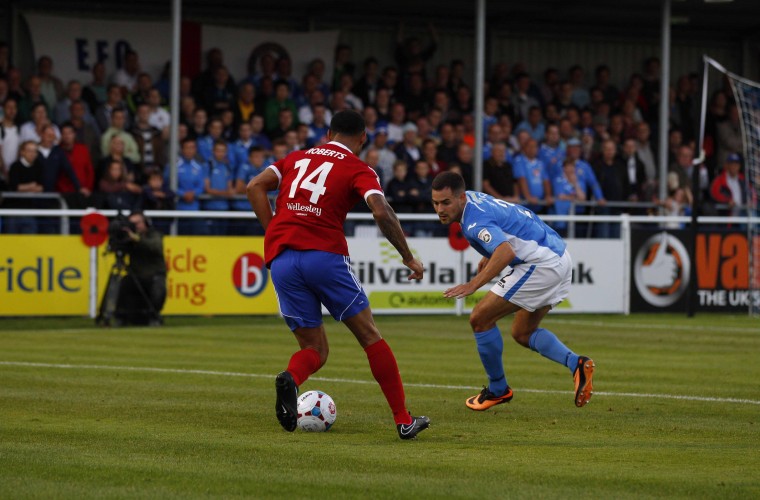 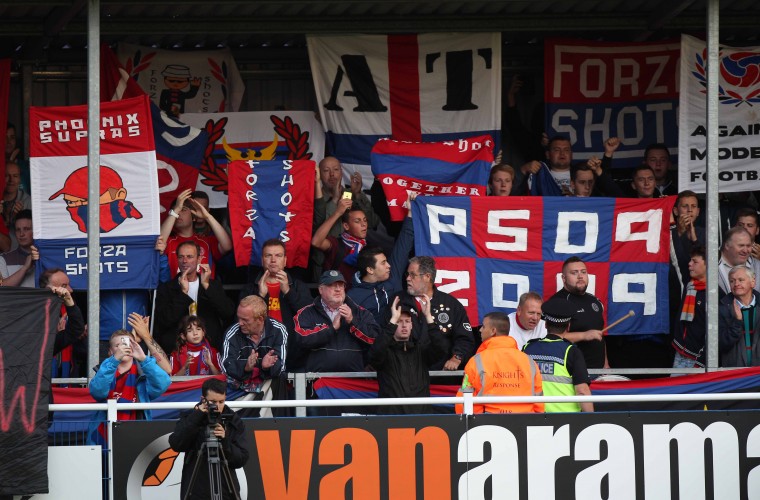 Substitute Ben Wright snatched Eastleigh’s winner with the last kick of the game after another impressive performance looked to have earned Aldershot Town a well-deserved point.

94 minutes had elapsed when Wright was left unmarked at the far-post to bundle the ball past Phil Smith and leave The Shots with nothing to show for their resolute endeavours.

Andy Scott enjoyed the luxury of being able to select the same starting line-up as Saturday, and welcomed Sam Hatton, back from suspension, onto the bench. For Eastleigh, Craig Stanley was denied an early chance to face his former side after failing to shake off a heel injury incurred against AFC Telford United at the weekend.

The Shots made a positive start but the opening exchanges were largely scrappy and yielded few clear chances. Odubade was a pacy threat for the hosts, and Chris Barker’s long throws caused a couple of moments of confusion in the Spitfires defence, but it was the 11 minutes until the first shot in anger arrived. Molesley’s cross was only half-cleared and Forbes sliced a 20-yard volley high over the crossbar.

Strevens saw a long-range shot blocked after Odubade’s cross wasn’t cleared, but Williams perhaps should have done better than slice his drive wide from a good position on the right side of the area.

Evans mis-directed a header from Jai Reasons’ free-kick, and Molesley sliced a shot badly wide, as neither side mustered a final ball to match their industry. The half’s best chance, on 31 minutes, fell to Jordan Roberts: Gibbs’ teasing cross from the right flew over Scott’s head and dropped to Roberts, who slid in on the six-yard line but could only stab his effort a yard wide.

As a bucolic summer evening gave way to filthy wet night, Eastleigh were resurgent. Constable’s overhead kick dropped wide of goal, and Molesley was forced into a desperate clearance of Odubade’s deep cross. Yet it was The Shots who ended the half well. Williams hesitated fatally when the ball dropped at his feet inside the box and, from the resulting corner, Oastler headed wide. In the last minute of the half, Williams turned sharply in midfield and unleashed a 35-yard snapshot, before Roberts cut inside from the right only to scuff his shot weakly wide.

The introduction of Stuart Fleetwood roused Eastleigh and, within seconds of the re-start, Constable powered a header inches over the bar from Odubade’s cross. Aldershot Town, however, stood strong, and restricted The Spitfires to few opportunities. Constable, again, hooked a volley wide and, after Josh Scott sliced a shot wide at the end of a patient build-up, Reason burst towards the byline and set-up Midson for a shot which hit the crossbar.

Belatedly, the game opened up. Scott’s instant turn and shot, from Roberts’ pass, had Flitney grateful to see the ball flash wide of his far-post and left-back Green broke into the box only to see his shot blocked.

Another change, awarding a debut to Sam Hatton, galvanised Aldershot Town, and Jordan Roberts twice suggested that he might be the match-winner. Constable and Williams provided comfortable saves for their opposing goalkeepers and it was left to Ben Wright, seemingly afforded just a late cameo, to seal the home victory.

Failing to deal with a harmless cross which unexpectedly stayed in play, The Shots conceded an unnecessary corner; an error which they compounded by giving Wright ample space to bounce a shot past Smith and into the roof of the net.

The neutrals watching on BT Sport would have been satisfied with the late drama, but for Shots fans it was a cruel and unforeseen twist in the tale.