Today, on their fourth attempt, Aldershot achieved their first home victory of the season against a struggling FC Halifax Town in a real game of two halves. 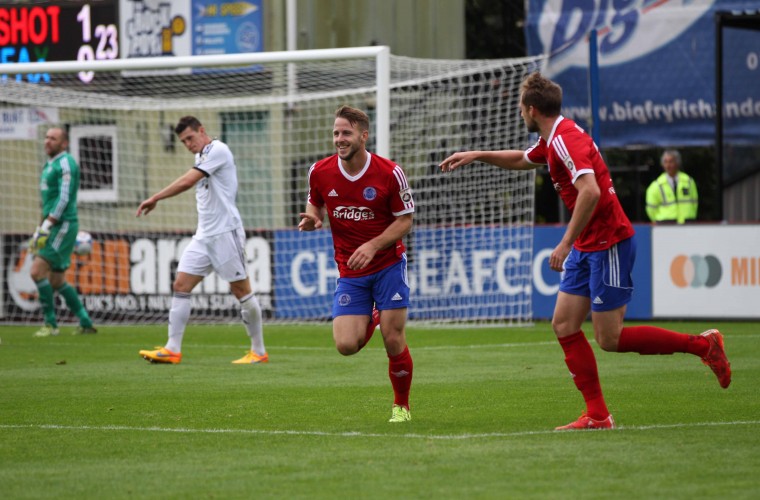 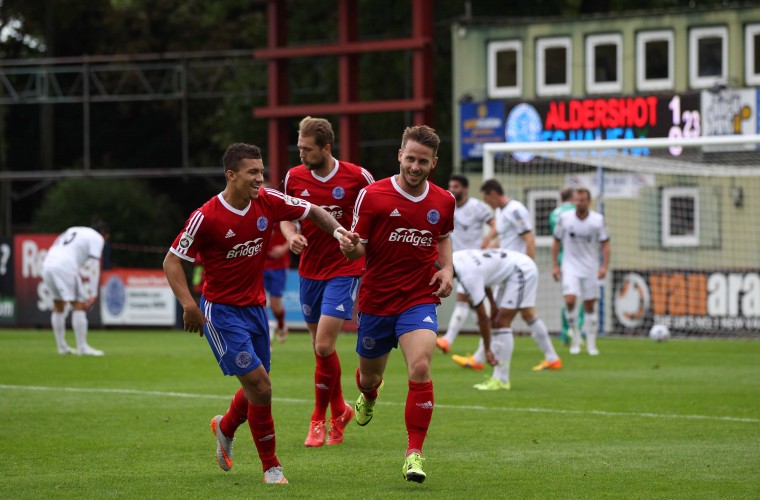 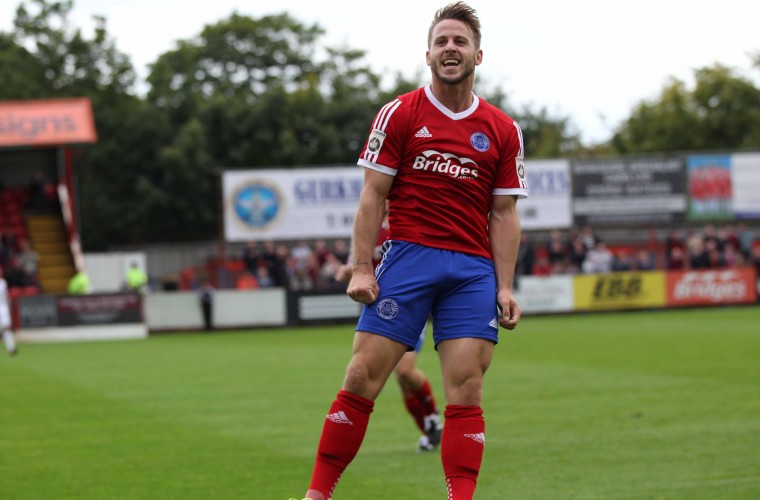 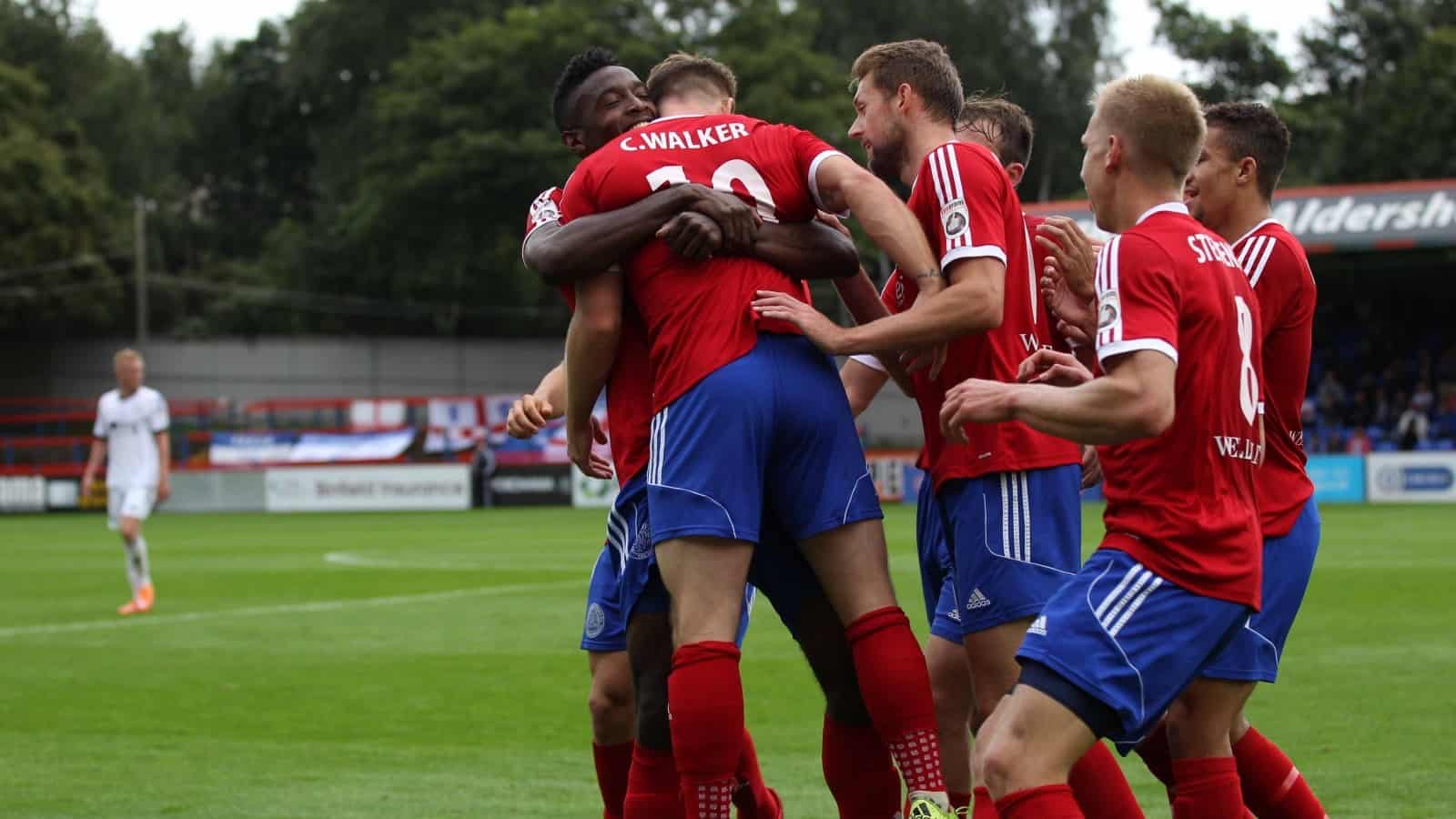 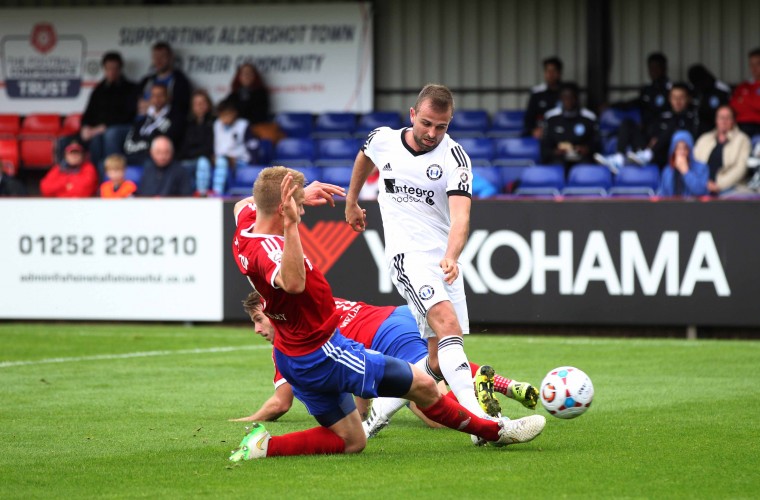 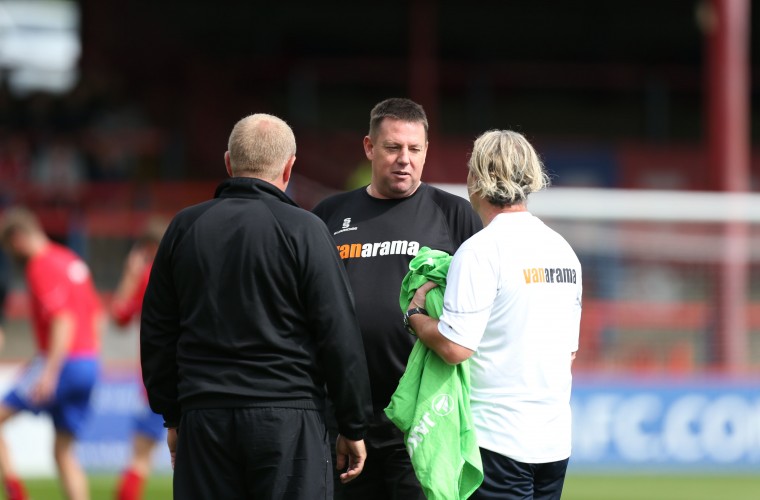 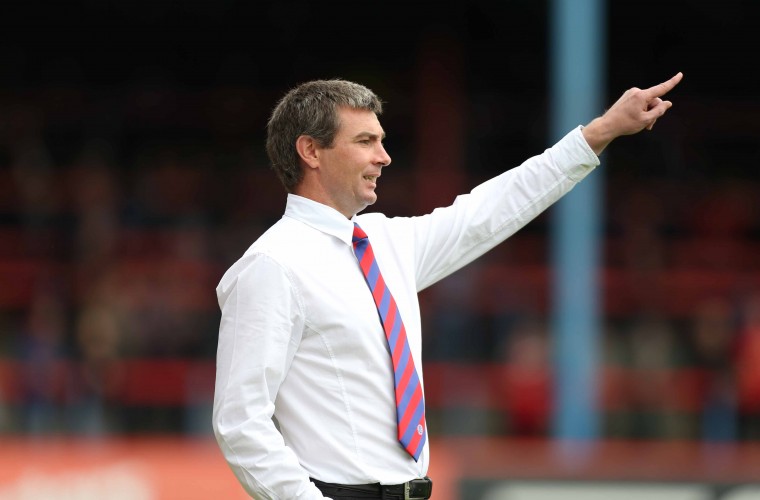 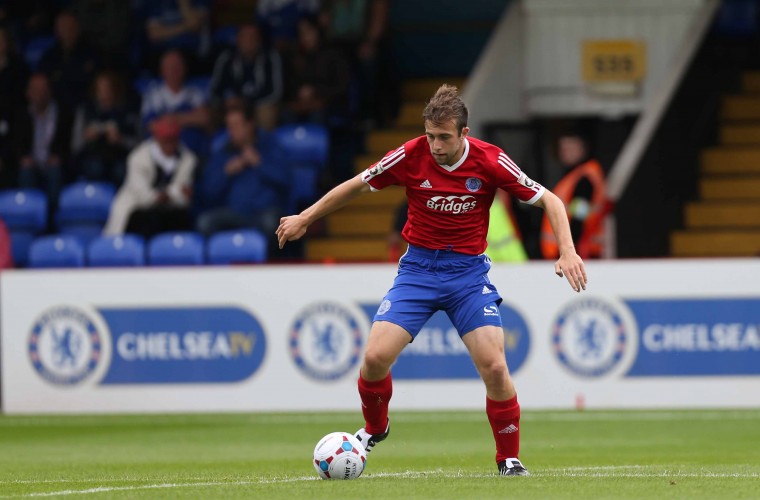 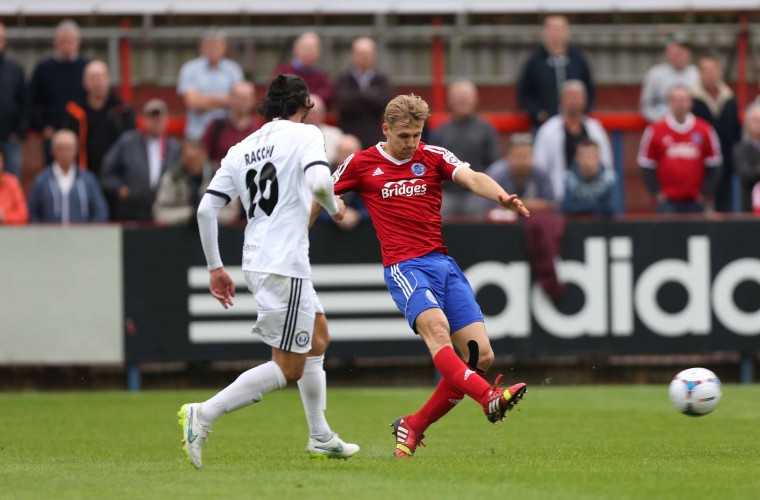 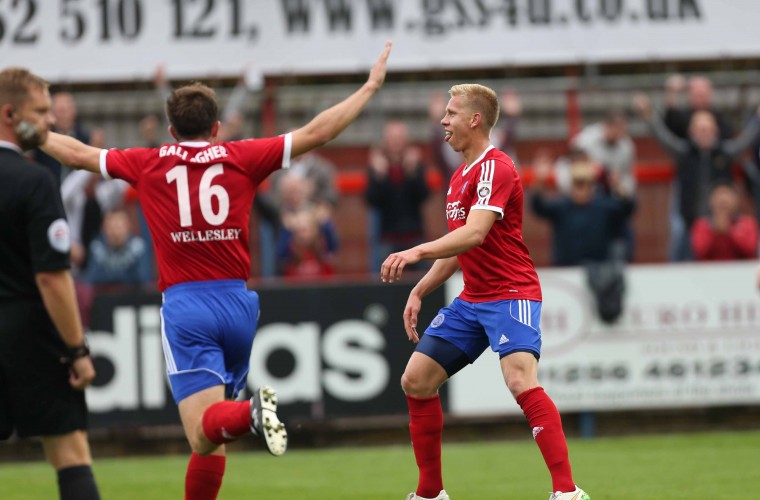 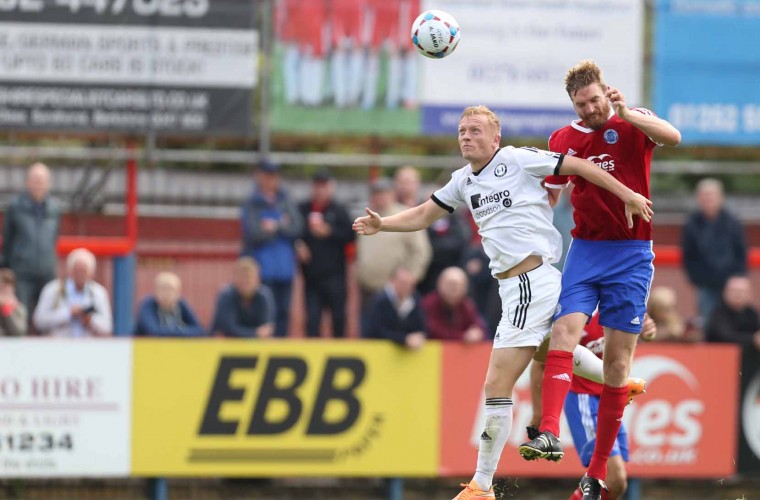 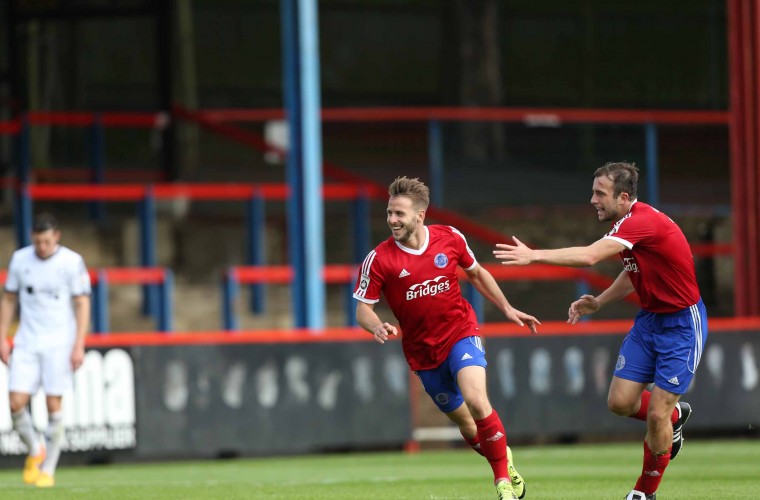 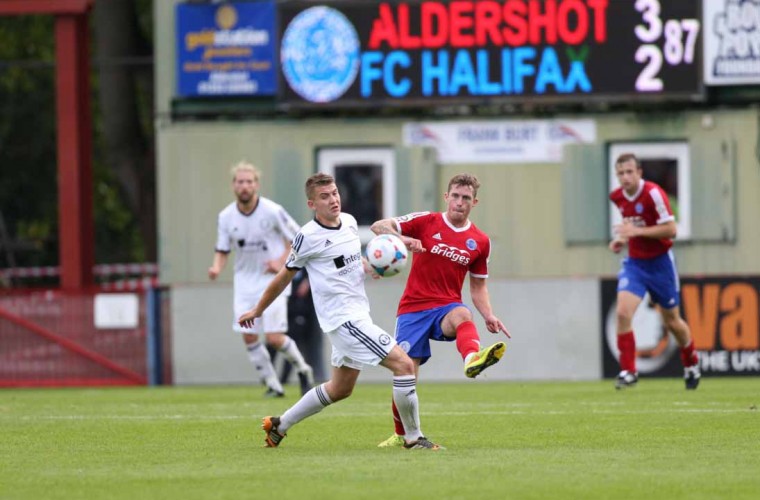 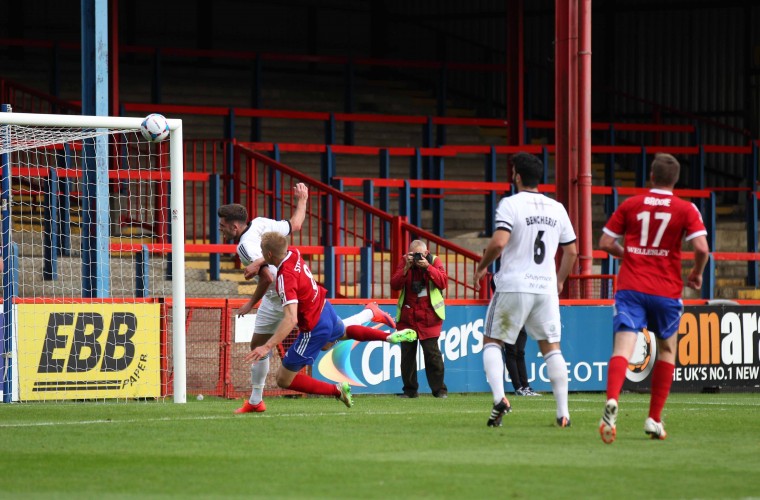 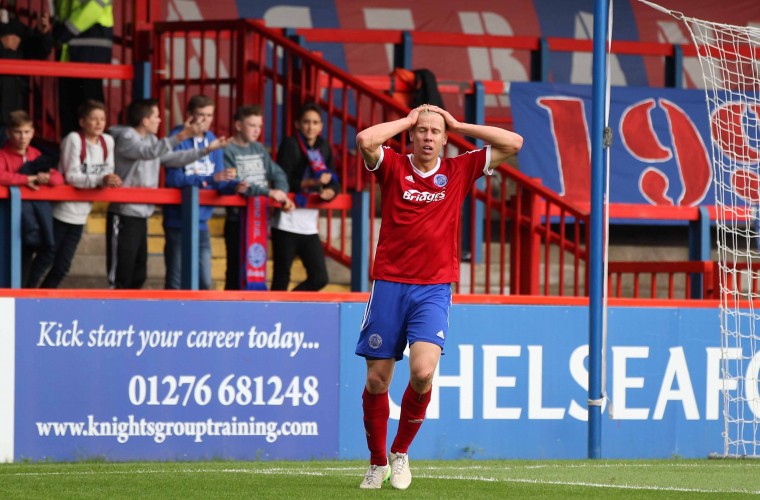 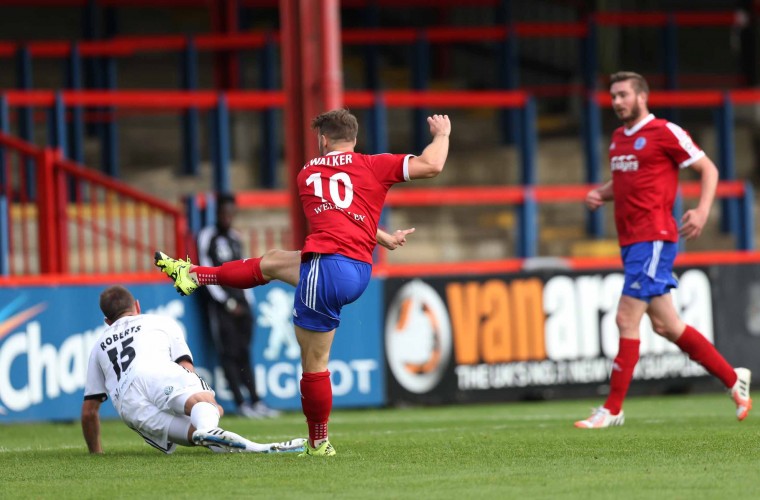 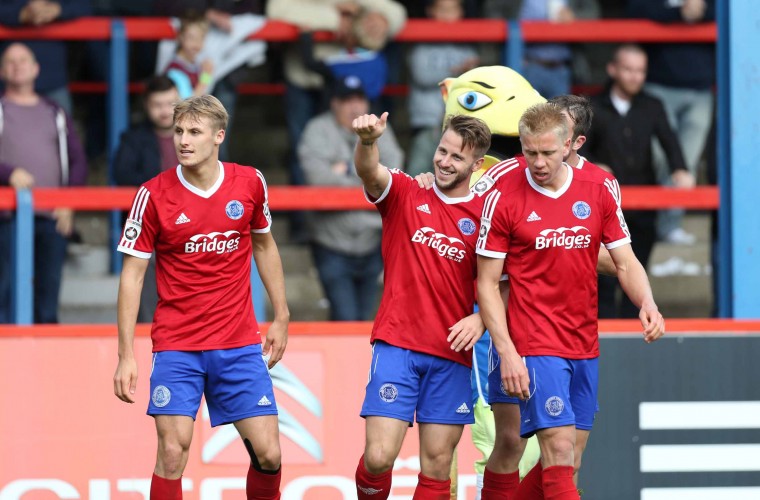 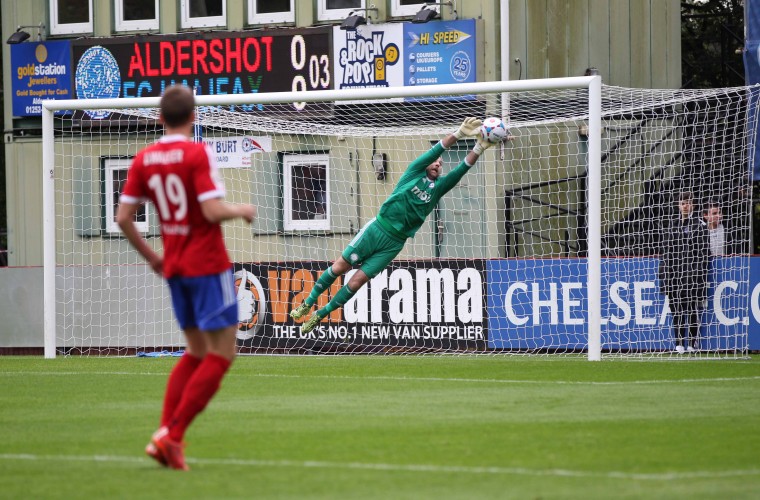 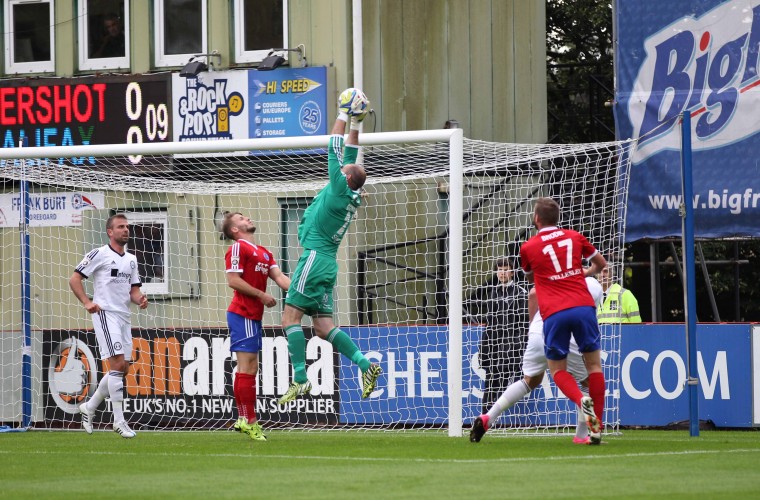 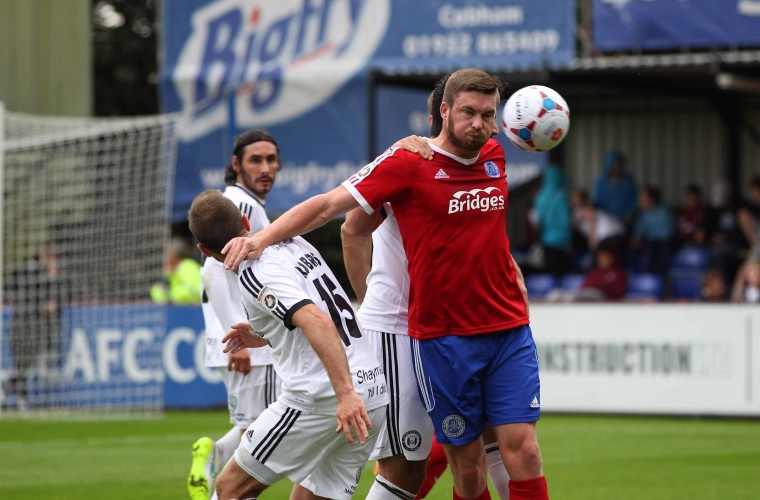 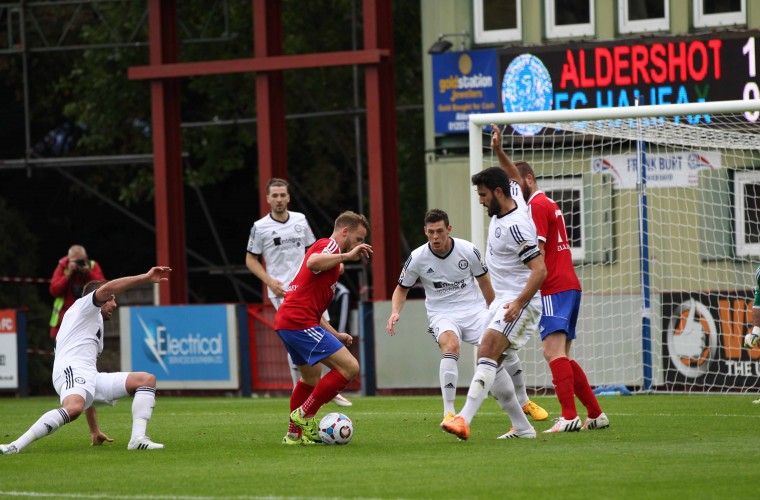 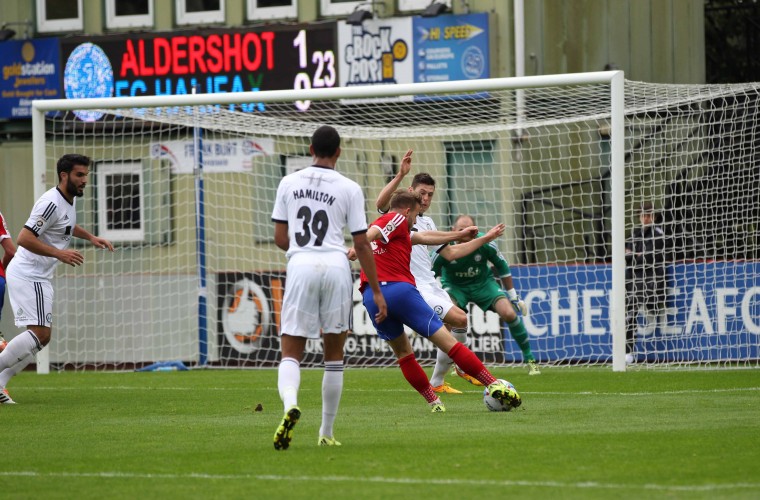 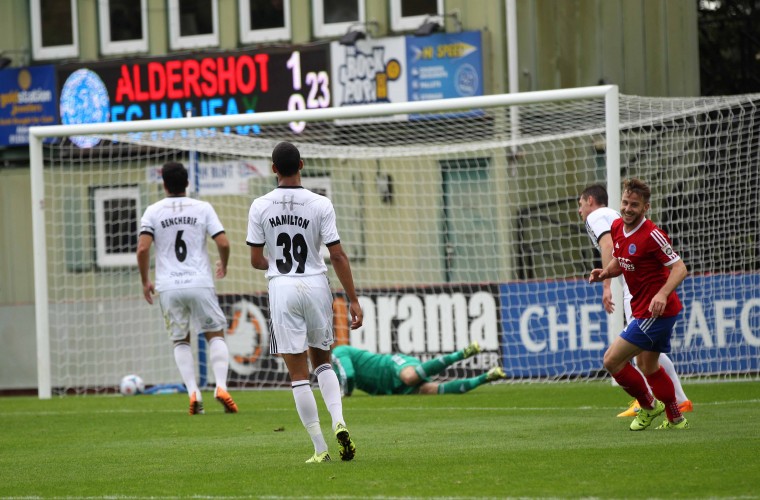 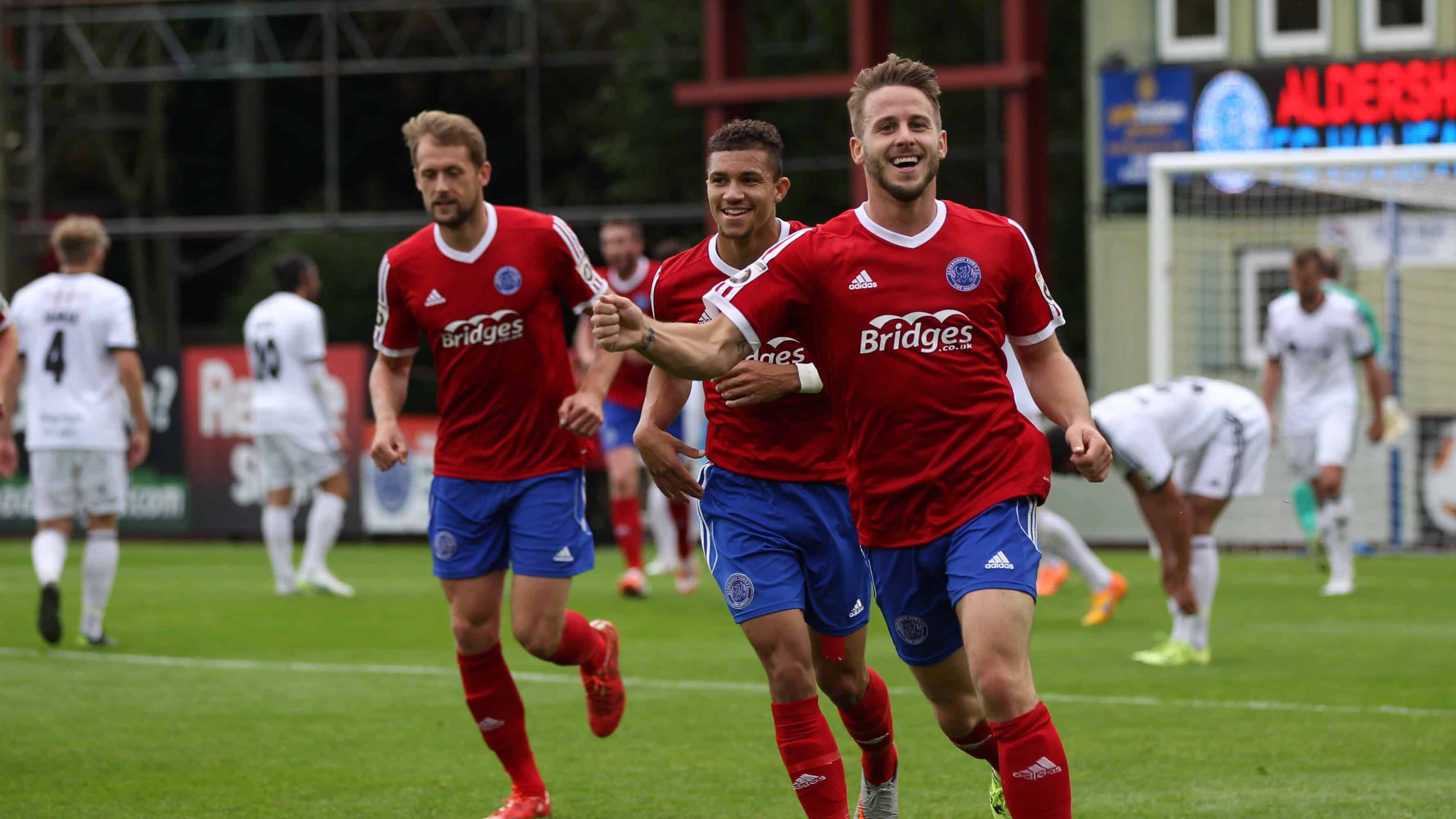 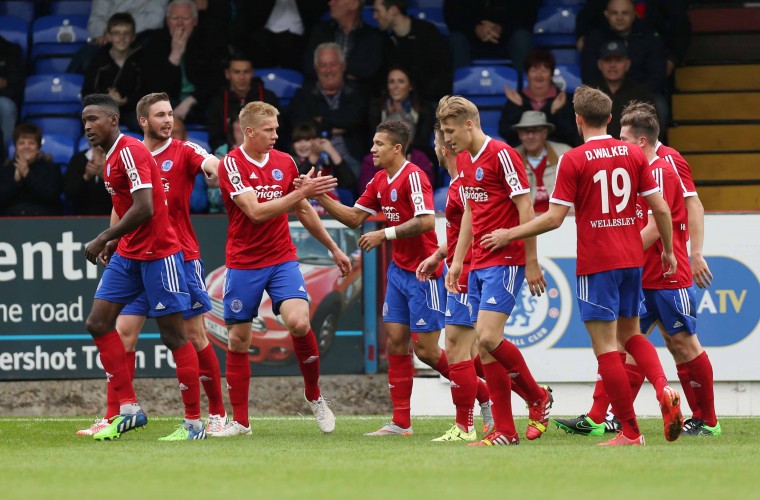 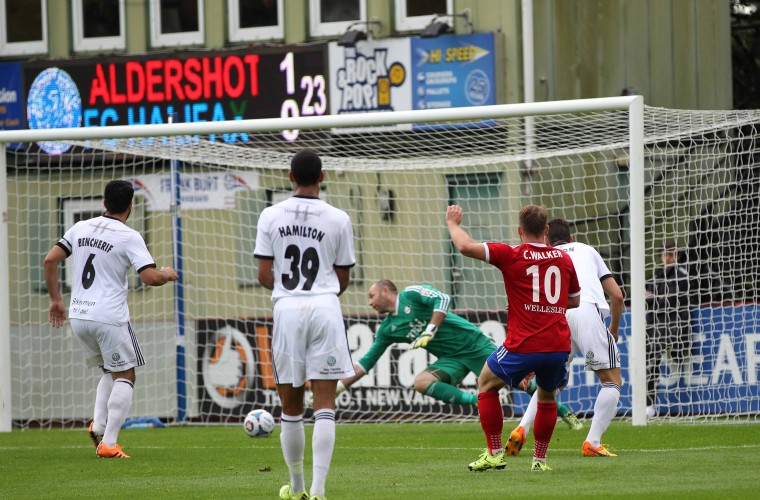 The Shots fielded a starting eleven which only featured one change from the team which beat Braintree on bank holiday Monday. With Rhys Browne on International duty, Charlie Harris made his first start for Aldershot in midfield as the lined up in a 4-3-3 formation.

FC Halifax Town kicked off towards the East Bank and the first real action came two minutes in, when Charlie Walker was upended centrally around 25 yards from Glennon’s goal. Anderton struck the free kick with pace towards the top right corner, but Glennon did well to get behind the ball to save.

The next period of fifteen minutes or so was played mostly in the middle of the field, with both teams taking turns in possession and absorbing pressure effectively. As the scoreboard ticked into the 18th minute, Stevenson broke the deadlock. Charlie Walker pushed down the left wing and popped the ball into the box. A half-clearance fell to Jake Gallagher who settled the ball down and laid it off to Stephenson outside of the area who laced the ball diagonally across goal into Glennon’s bottom right hand corner.

With the next meaningful move came the next goal. This time the play came down the right hand wing, starting with some good play from Cheye Alexander combining with Dan Walker who slotted the ball sideways to his brother inside of the 18 yard box, He settled himself with a touch that nearly took him into the path of an oncoming defender. A second touch, took him further into the area and looked to run him into trouble, but, Walker threaded the eye of a needle and slotted the ball into the same corner that Stephenson had found six minutes earlier. 2-0.

Three minutes later, in the 27th minute, Halifax looked to respond. A cross from the left wing by Brooks, finding Jordan Burrow centrally who rose higher than Oliver but could only direct his header onto the top of the crossbar.

For the rest of the half, the Shots continued to express their dominance and looked to take the game away from Halifax. In the 34th minute Brodie showed his intent to add his name to the scoresheet and drove a fierce shot from 25 yards out past Glennon’s left post. Two minutes later, another chance for Brodie came following a whipped cross by Harris finding him unmarked at the back post. His header forced a great save, albeit the linesman’s flag had risen for offside.

The second half began with the same intent, despite a double substitution for Halifax, which saw Hutchison and Tutton (who had received a knock following a late challenge by Anderton at the end of the first half) replaced by McManus and Hattersley.

In the 51st minute, Charlie Walker got his second goal. Brodie powered into the box following a quick forward move and slots the ball square to Walker who set himself and fired the ball hard and high, centrally, underneath the crossbar and in. And only two minutes later, he could’ve had his hat-trick. Brodie found Dan Walker on the left who pulled it back for Charlie who set himself but was smartly robbed before he could execute.

In the 55th minute, Charlie Walker did have the ball in the net for the third time. This time Brodie worked hard to reach a long ball at the byline to drive the cross to Walker who headed firmly into the top left. 4-0? Unfortunately not. The linesman on the far-side had adjudged the ball out of play. Charlie Walker’s hat-trick celebrations would have to wait.

Only four minutes later, and seemingly from nothing, FC Halifax were beginning to turn this game on its head. Some determined play down the left flank from Brooks allowed him a crossing opportunity which was intercepted and fell into the path of an onrushing Hattersley. He unleashed a thunderbolt drive across goal into the top right hand corner of the net. 3-1, game on.

Something between that goal, and the one disallowed for the Shots, changed the pace of the game and everything now was in favour of the Shaymen.

The Shots attempted to defend resolutely, but FC Halifax did make their pressure pay, and found another goal via Brooks in the 84th minute, arriving late onto a McManus ball to stroke the ball past Smith. 3-2, and setting up a very nervous finish.

After a lengthy 5 minutes of additional time, the Shots held out to record their first home win of this campaign. After a completely dominant opening hour, we saw a fragile final thirty minutes which nearly allowed Halifax to grab some points.

Although this game could have finished 5-0, it could easily have been 3-3, or worse… The final whistle was met with a collective sigh of relief, but the final half-hour is beginning to become a nuisance for Shots having conceded more in the last 30 minutes of their games, than the opening 60 so far this season. Concentration? Fitness? Or just coincidence?

Regardless, a good three points earn’t. And two wins in a row now to take onto Grimsby next Saturday.