The Shots unbeaten run was ended today after a professional, polished performance from fellow low-table dwellers, Southport. The Merseyside outfit took an early two-goal lead within the first quarter and saw the game out to take the three points.

The Shots’ lineup featured two changes from their last outing. The injured Plummer was relegated to the stands, whilst Danny East was recalled by his parent club, Portsmouth. This meant Molesley and Saunders found themselves in the starting eleven, both themselves recovering from previous injury troubles. 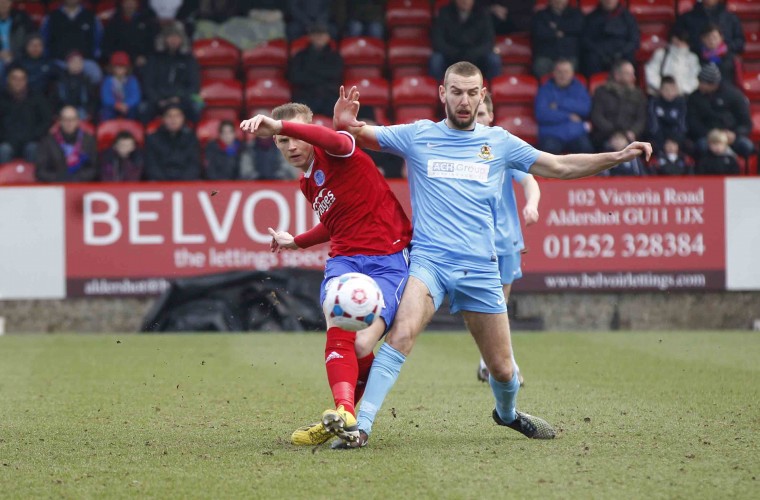 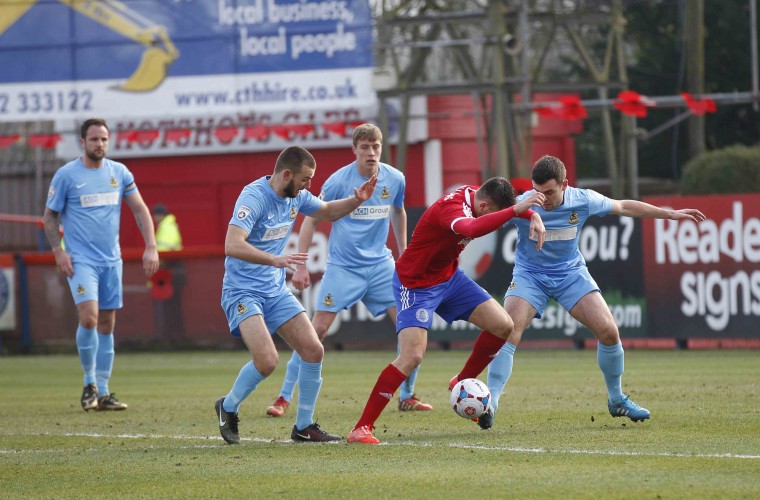 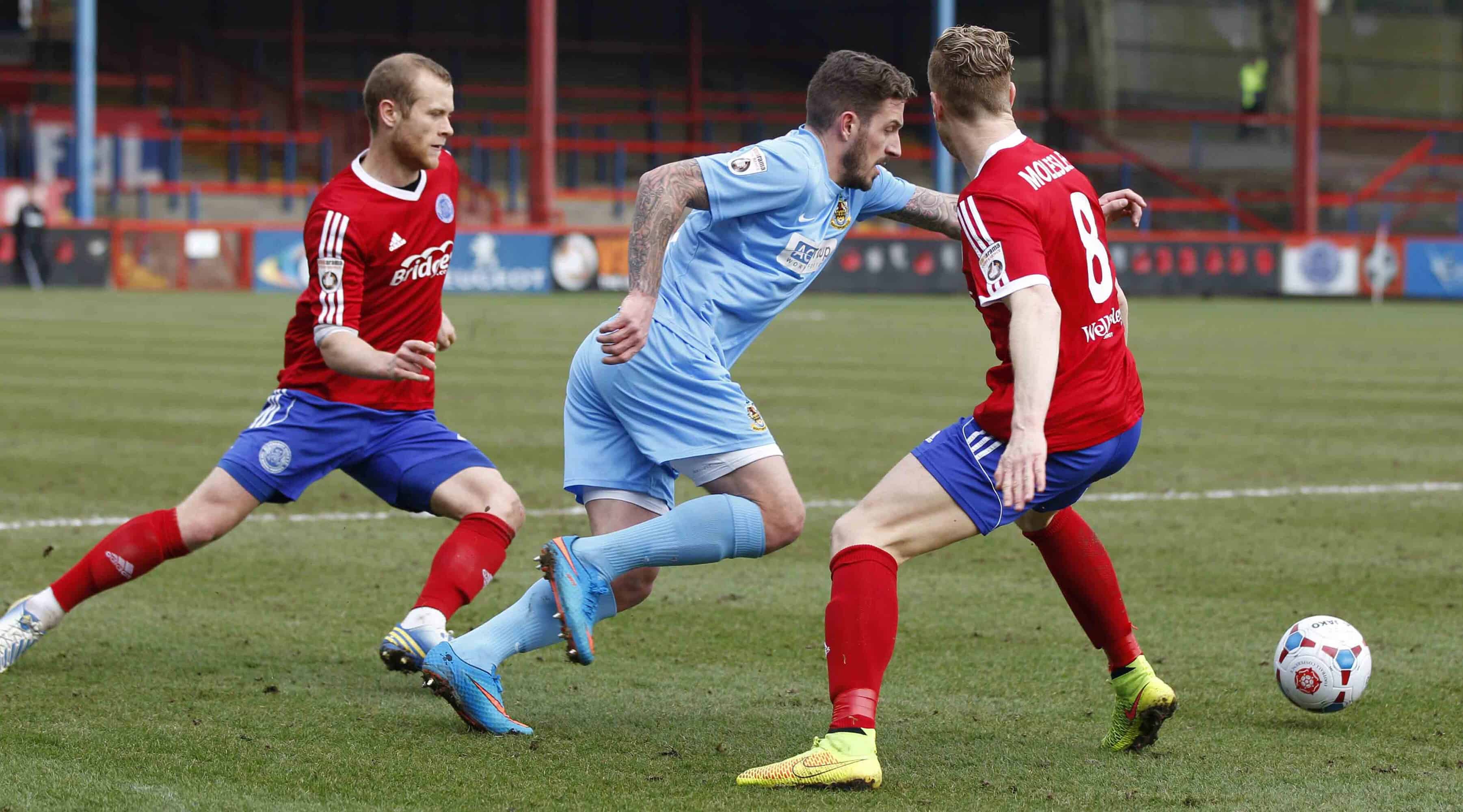 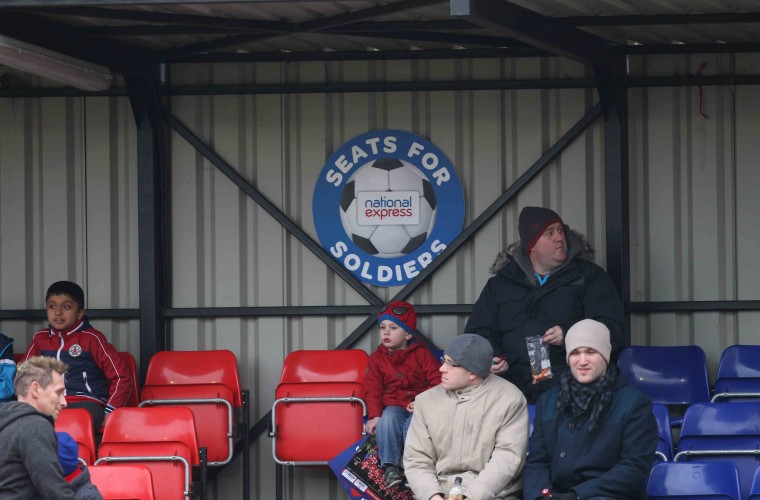 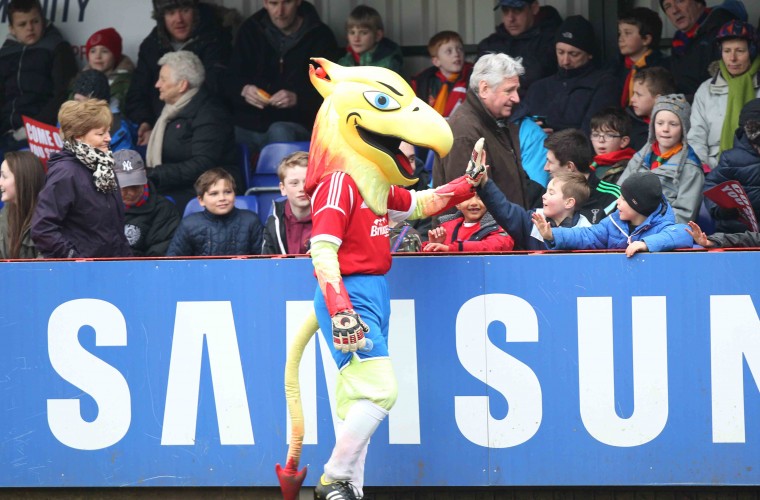 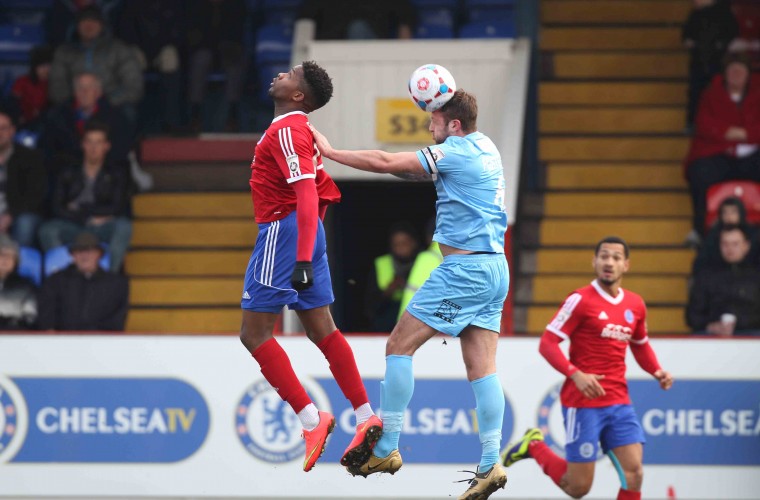 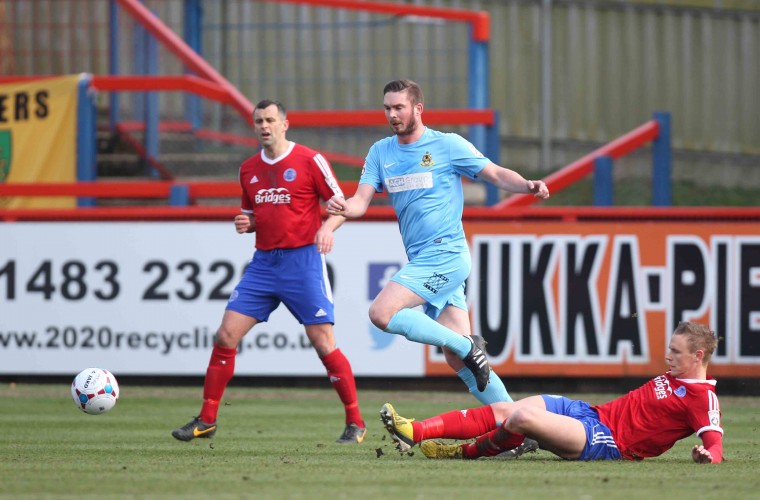 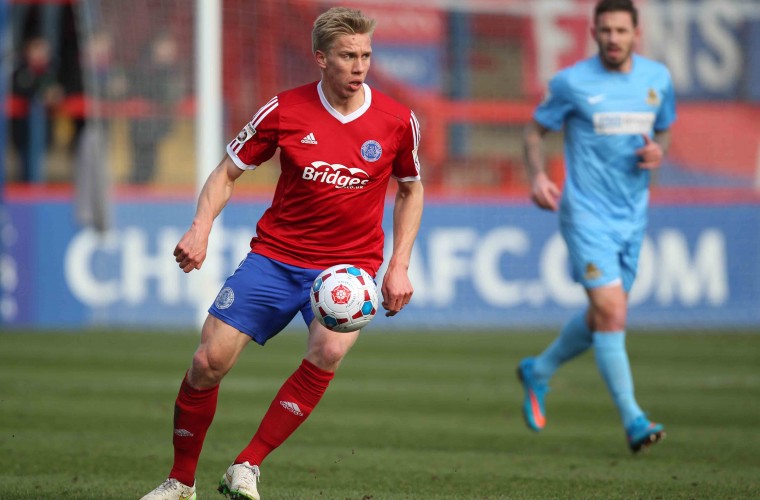 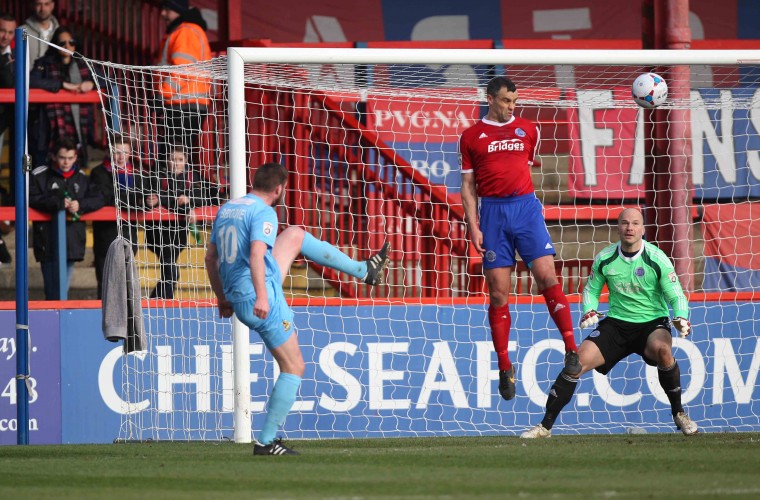 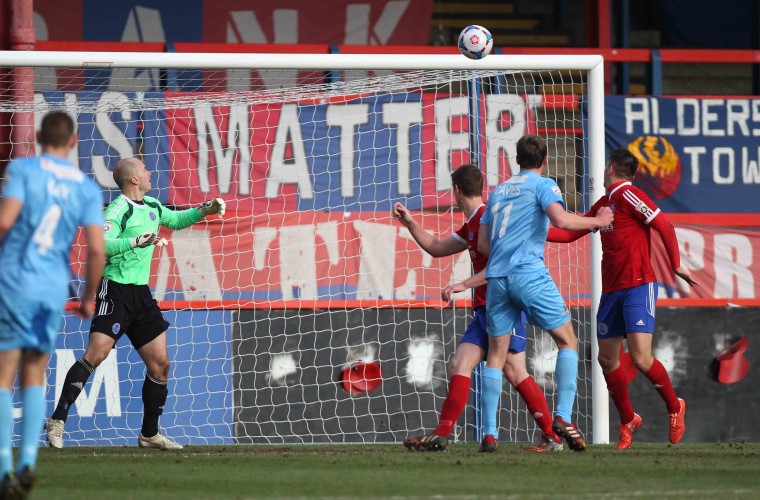 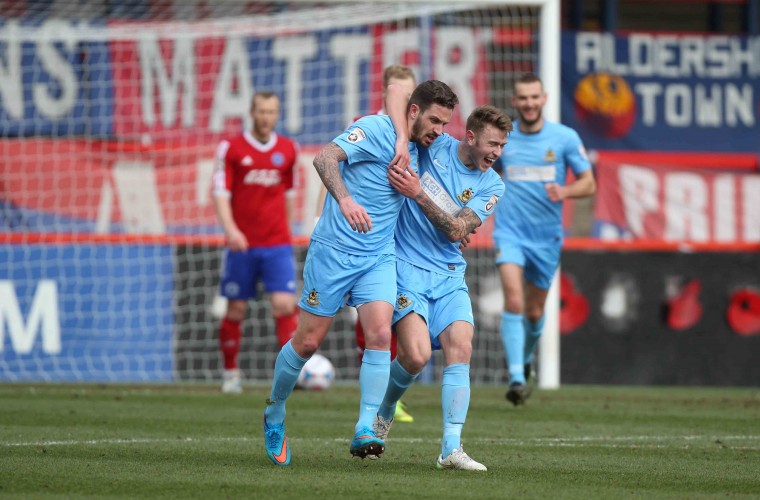 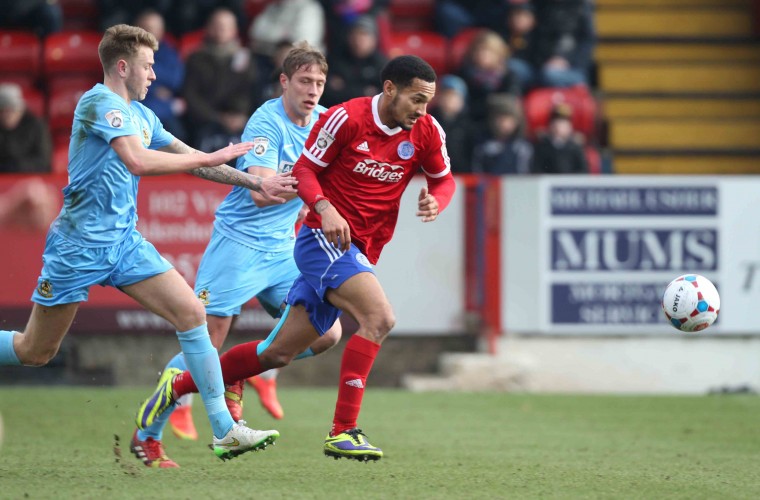 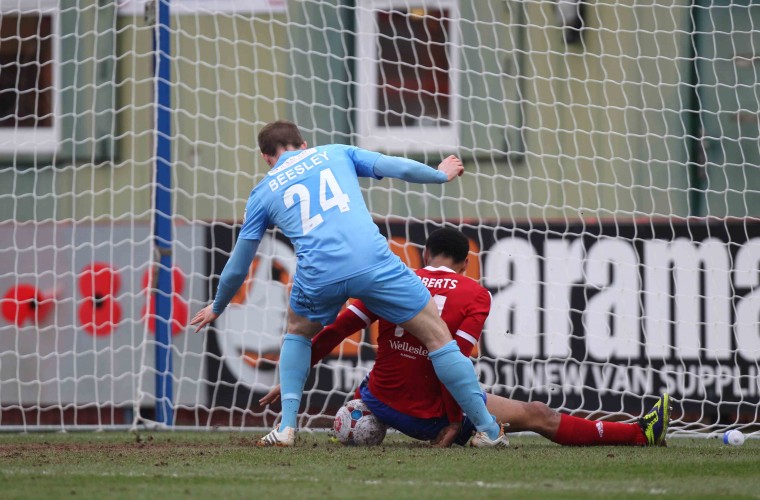 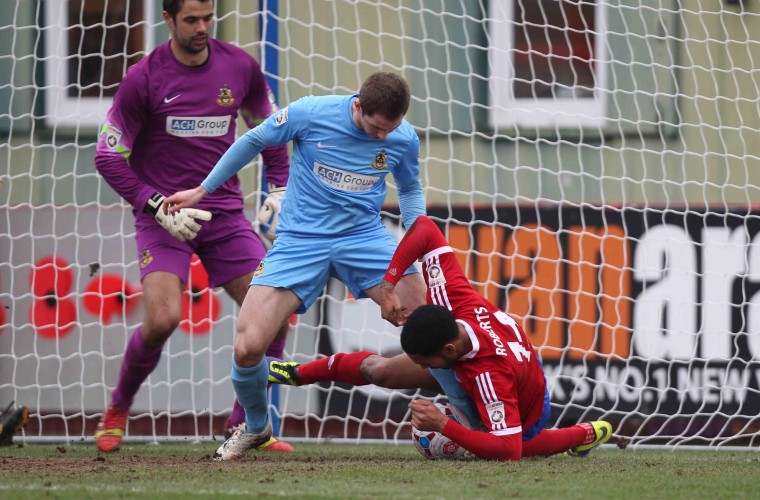 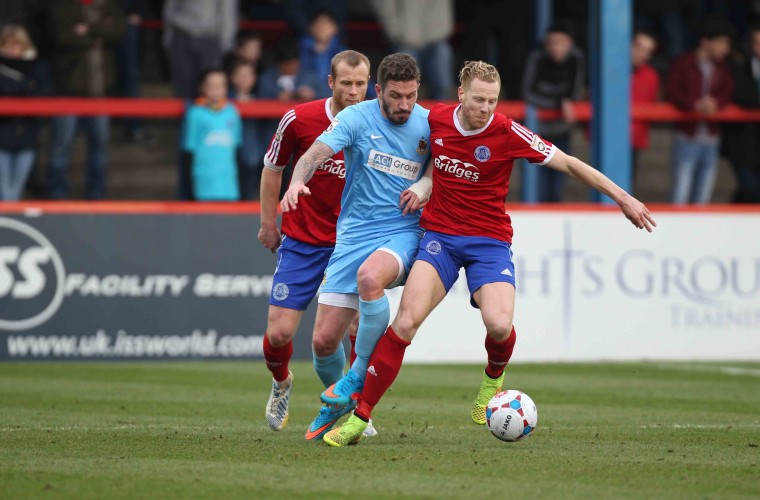 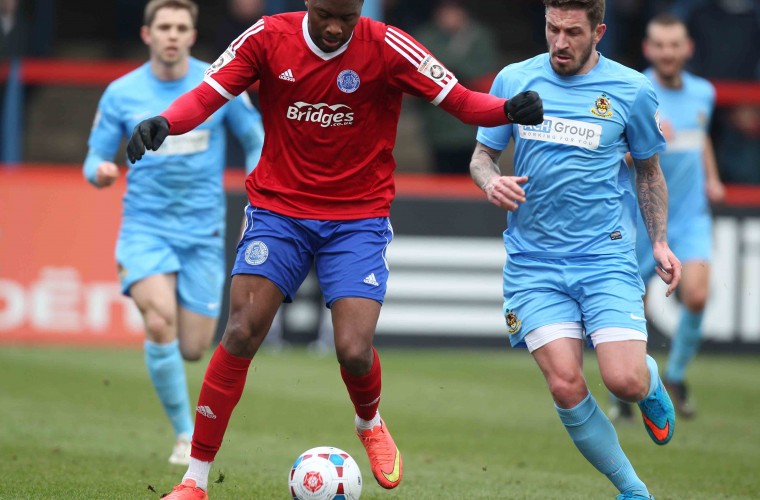 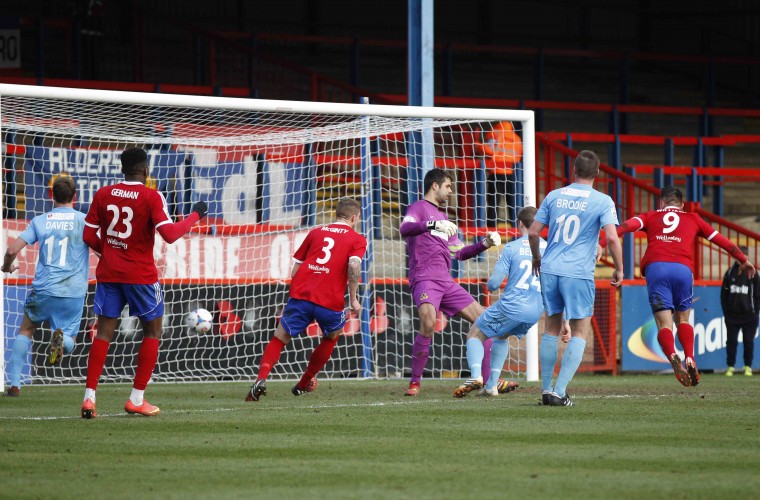 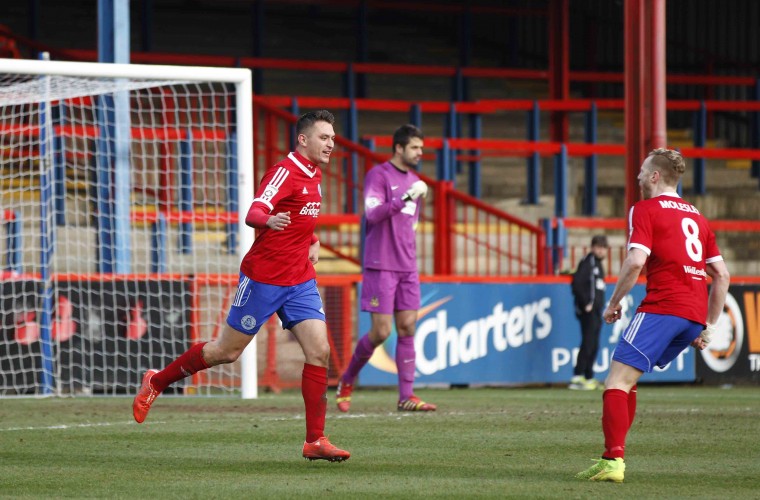 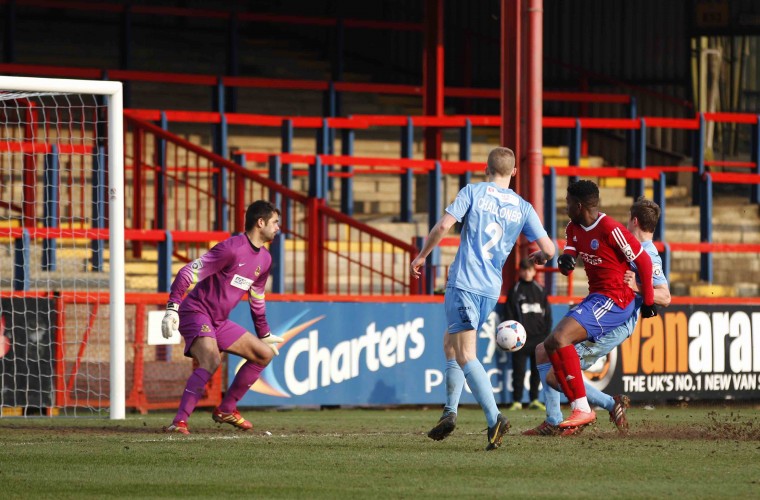 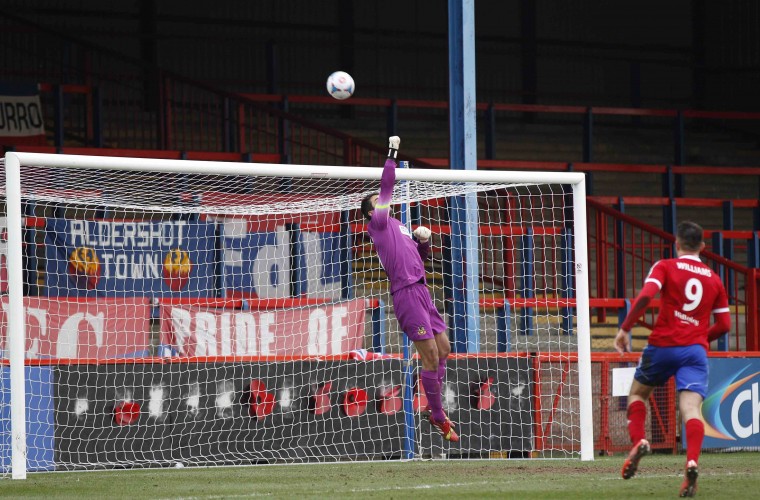 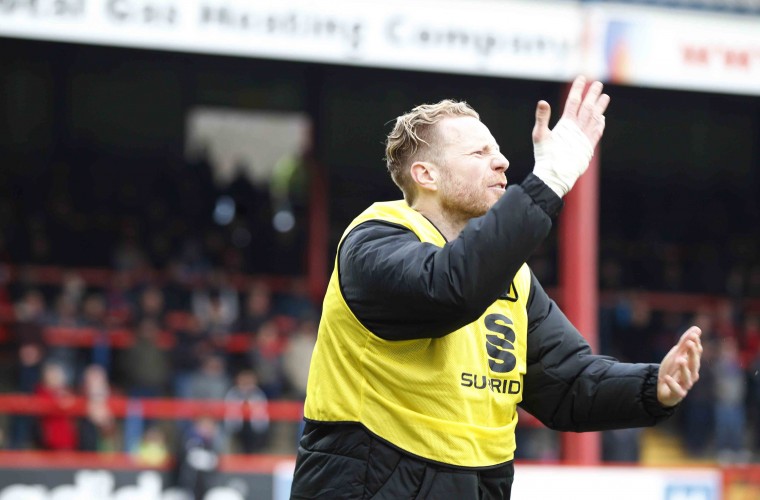 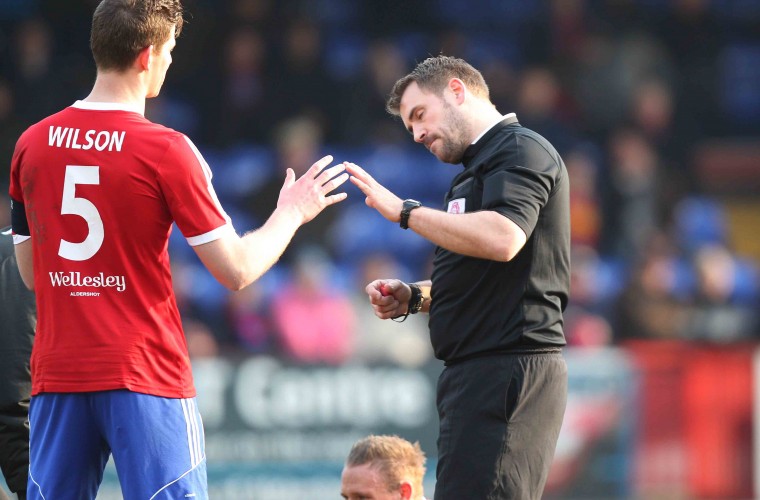 Southport kicked off towards the Eastbank wearing their all-light-blue kit and set the tone for the afternoon. They retained possession early on and slowly pushed forward into Shots’ territory, recycling the ball well through the midfield. The game was unsettled for the most part in the early periods, with spells of possession for both sides not really developing into anything productive.

As the game progressed past the opening ten minutes, the Shots grew in confidence with Molesley, Stevenson and Saunders all pushing forward in tandem at times looking to create chances with German and Williams. Southport in turn fell back behind the ball whilst the Shots continued to look for gaps in the defence. Southport themselves became more direct, searching out Donnelly and Brodie to try to make something happen, and they didn’t have to wait too long…

In the 14th minute, Donnelly pushed Wilson off the ball down the left side and burst into the Shots penalty area, only for Barker to insert himself between the Southport striker and the ball to calmly clear. That warning should have been enough but in the 19th minute a similar situation unfurled. Brodie picked up the ball on the left, put a low diagonal ball across to Donnelly who sharply flicked it into Smith’s feet. Smith reacted well, swivelled on the spot, outmaneuvering Wilson, and dispatched coolly into the bottom right. Shots 0-1 Southport.

The dominant play from Southport continued, with the triple-threat of Brodie, Donnelly and Smith combined well, consistently. With the next effort, Paul Smith shot optimistically from 20 yards, and Phil Smith could only palm the ball around the post. From the corner that followed, a glorious chance to double the lead was spurned. Davies found himself with the ball at his feet close to the penalty spot and could not keep his shot down, to much relief of the home support.

The relief was however, short-lived as in the 25th minute Donnelly did indeed double Southport’s lead. Smith spun past McGinty down the right side and pulled the ball back to Donnelly who was waiting centrally in the area. The connection was solid and the ball flew past a planted Phil Smith low into the right hand-side of the net.

This pushed the Shots into action and looked for a resurgence. Williams was fed the ball down the left wing. He smartly skipped past a committed Challoner to the Southport byline, and with the outside of his right foot sharply pulled the cross back to Jordan Roberts who had burst into the area. The pass took the goalkeeper out of action completely, and Jordan, although faced with an open goal in front of him, put his foot over the ball and lost control a matter of inches from the goal line. The Southport defence smuggled the ball away to safety and the Shots should have been only one goal down at this point.

In the 34th minute, Williams again was creator. This time bursting down the right flank and crossing to an onrushing Antonio German who just couldn’t connect. Another good chance gone.

The next period up to half-time was scrappy, with Southport managing to diffuse the Shots’ attacks as more and more passes went astray. Southport themselves retained the ball more effectively and worked hard to win the ball back. Donnelly charged down a hesitant Sam Hatton at right-back and managed again to power into the Shots penalty area. This time, Molesley managed to get in between him and the ball and diffuse a potentially dangerous situation.

A disappointing first half that was threatening to end Barker’s unbeaten run meant that changes had to be made. To which, Damon Lathrope came on to replace Stevenson at half-time. Subsequently, The Shots enjoyed a period of good possession as Southport initially started the second half much deeper than they had ended the first.

The Shots looked sharper and the passes were snappier in the opening exchanges, but the Southport defence continued to absorb the pressure, with no obvious holes opening up. As possession continued, a little Southport frustration emerged, and an angered Tom Davies lashed a leg out at Sam Hatton after the ball had gone. The referee let play continue but returned to the incident to caution Davies in the 58th minute.

From the resulting free kick on the right wing, Jordan Roberts whipped the ball into the box, and it was Williams who rose highest to power a header into the Southport net, just to the right of a planted Brezovan. Shots 1-2 Southport.

Antonio German looked to receive a burst of energy and belief – leading him to pressure the Southport defence in the following moments. He first managed to force a corner, before later finding himself on the edge of the area and managing to hook a powerful left-footed shot in the direction of the Southport goal. Brezovan was more than equal to it, as it reached him at a comfortable height and gathered comfortably.

Matt Saunders looked to take a knock in the following passage of play and tried to shrug it off, however, in the 64th minute he was replaced by Tom Richards.

Southport were the next to try and find an opening. Paul Smith found himself receiving the ball deep in Shots territory after a goal kick had bounced through to him. He swivelled on the edge of the area, but his sweetly hit strike could only find his namesake who gathered it with ease, much akin to German’s chance four minutes earlier.

The Shots continued to pile on the pressure, forcing some defensive errors but not managing to carve out any more clear-cut chances. In the 77th minute however, Roberts was fouled, and in almost the same spot from which the first goal had come, Roberts stood over another free kick. Jordan this time struck it sweetly at goal and as the ball dipped below the level of the cross-bar, Brezovan was able to get a fist to it to force a corner.

In the 84th minute, Jarvis came on to replace the Man of the Match (as selected by Match Sponsors, McDonalds), Mark Molesley. This was followed by a double sub from Southport that saw both Smith and Brodie replaced by McCarthy and Thompson.

The rest of the game petered out, with The Shots getting visibly more frustrated as Southport broke the game up continuously. The Shots couldn’t force another good chance on goal, and Southport saw out the five added minutes that the assistant referee had signaled for.

A disappointing end to Barker’s good run, but now he has the chance to start a new one at promotion chasing Bristol Rovers on the 20th.