Following Saturday’s 1-1 draw last time out at home to Dartford. Caretaker manager Chris Barker named two changes to the starting eleven as Tristan Plummer and Antonio German came into the fold replacing Jordan Roberts and Andre McCollin. Three ex Shots players in Dan Holman, Solomon Taiwo and substitute Stefan Payne featured in the visitors squad, who were looking to build on their solid and impressive recent form which had seen them claw their way into the top half of the table. 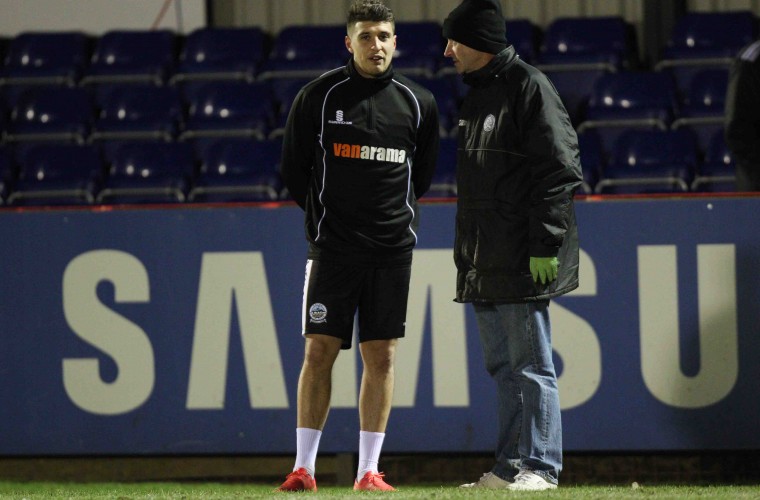 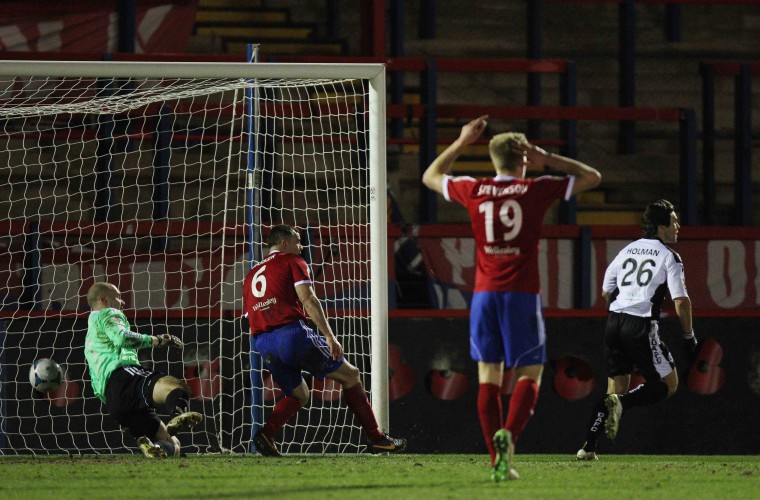 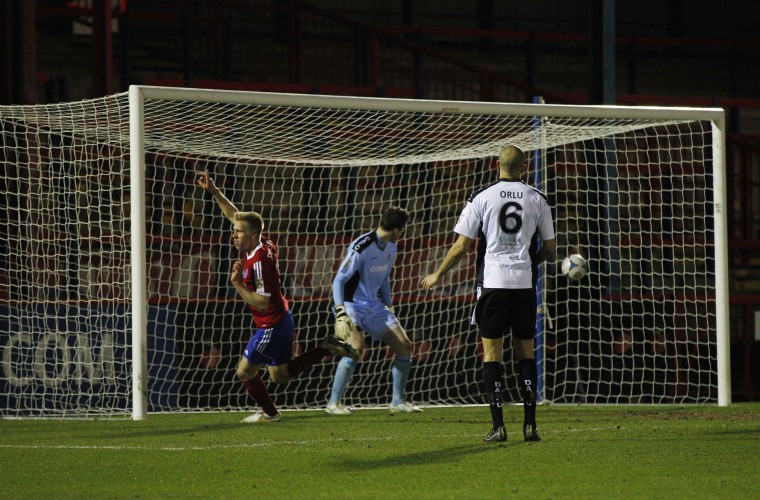 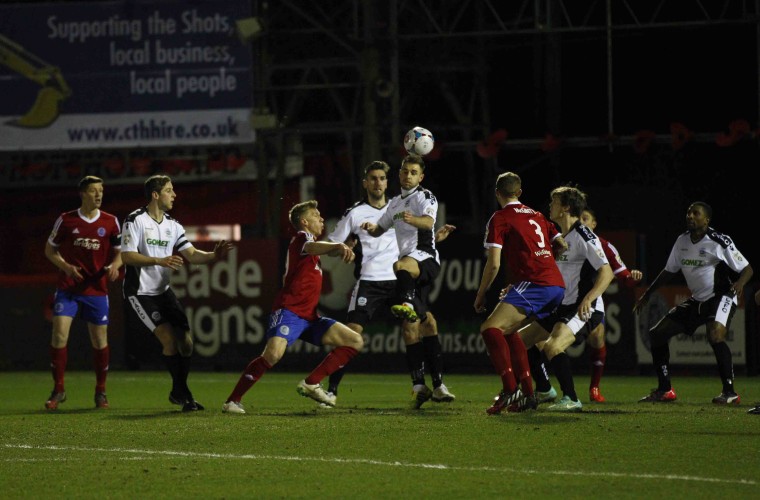 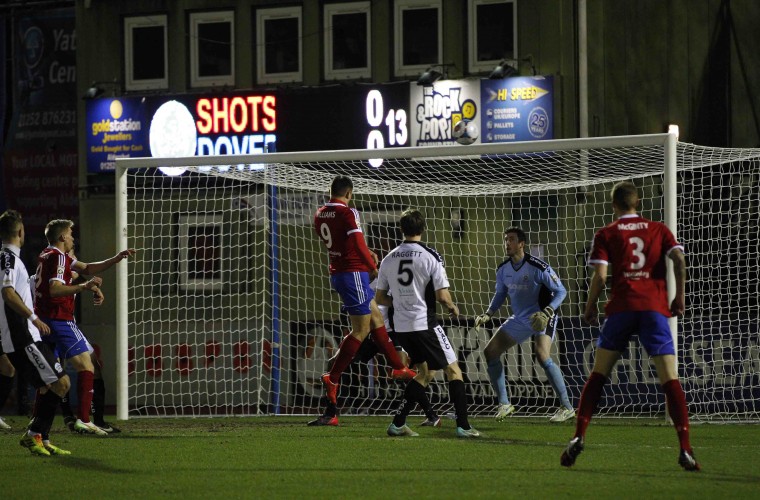 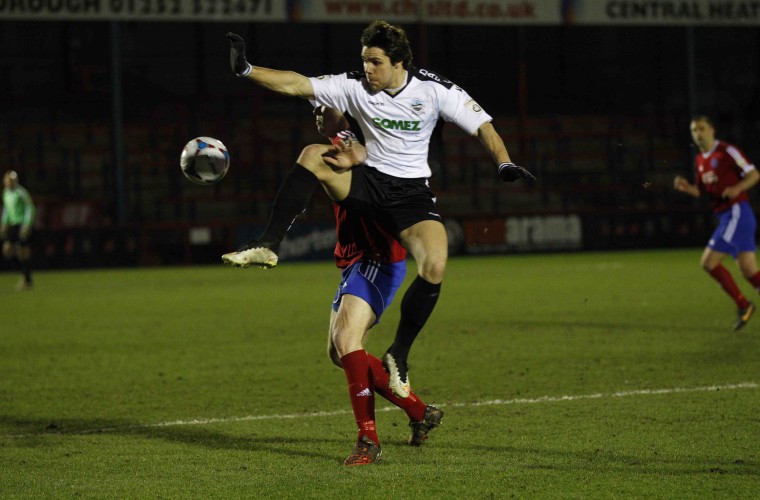 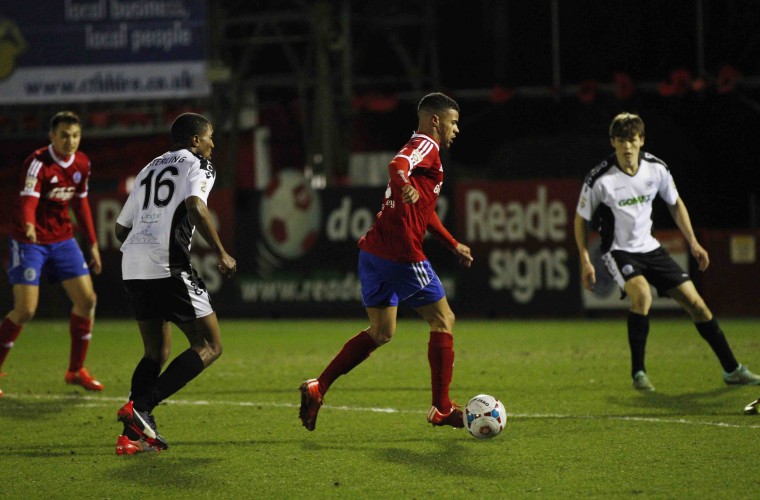 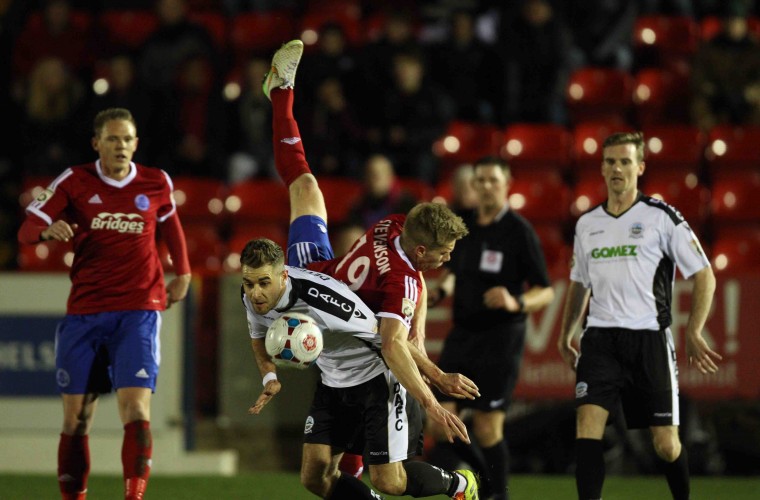 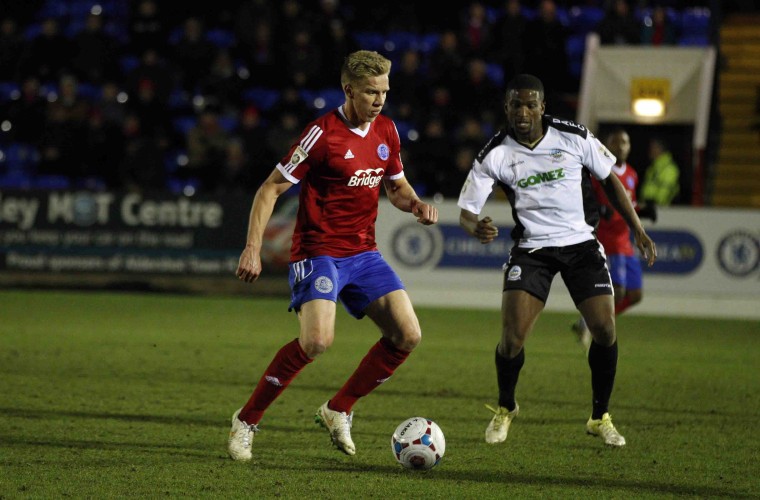 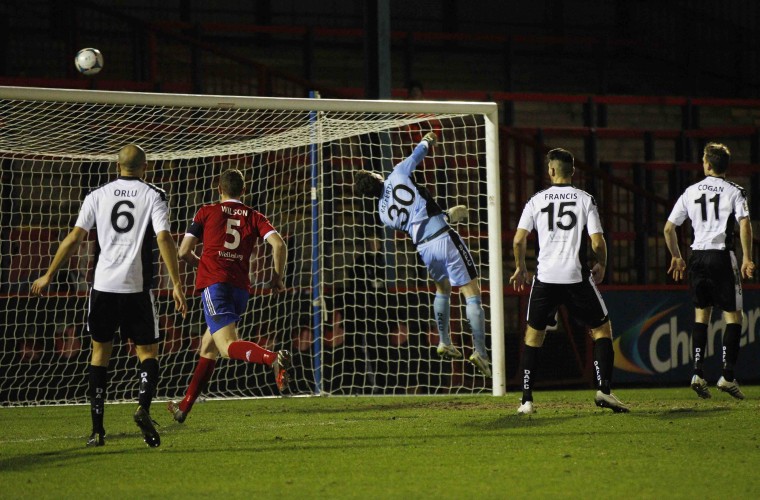 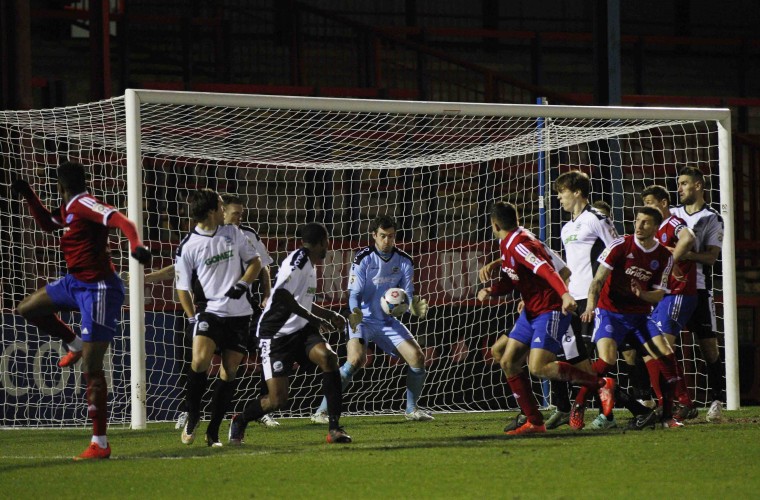 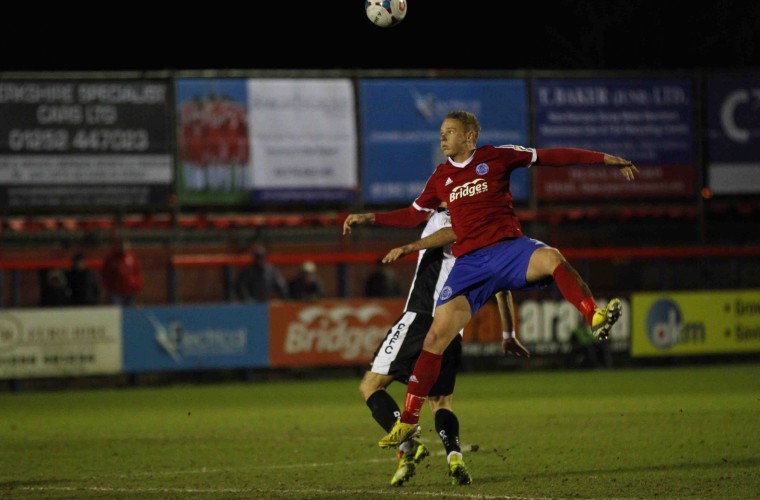 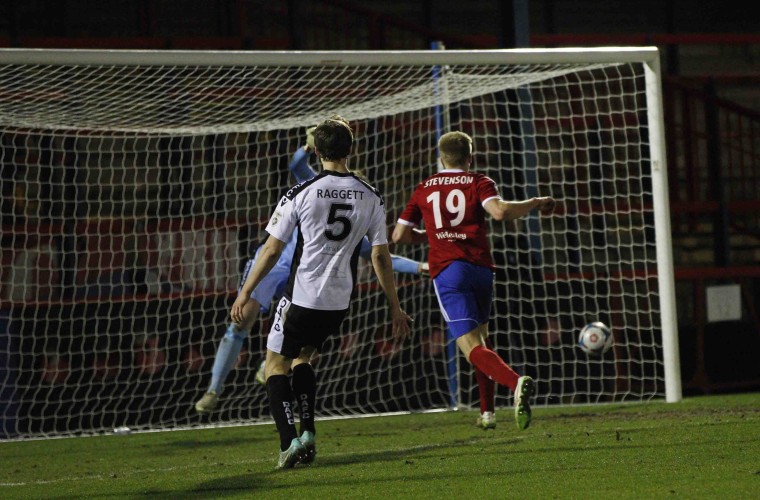 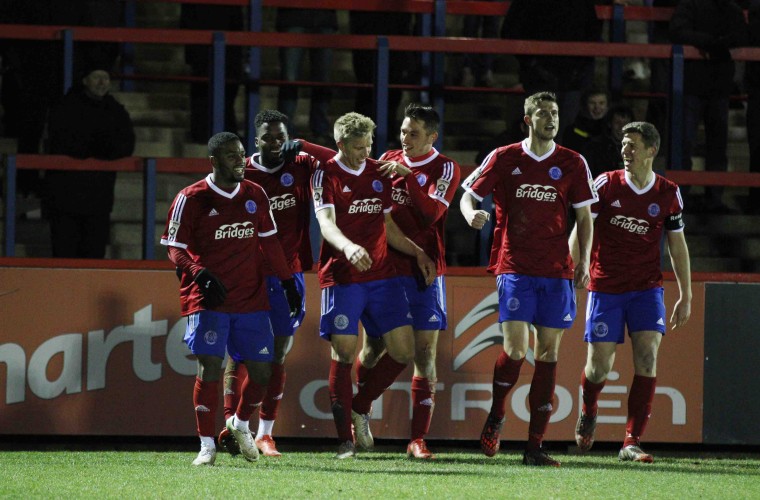 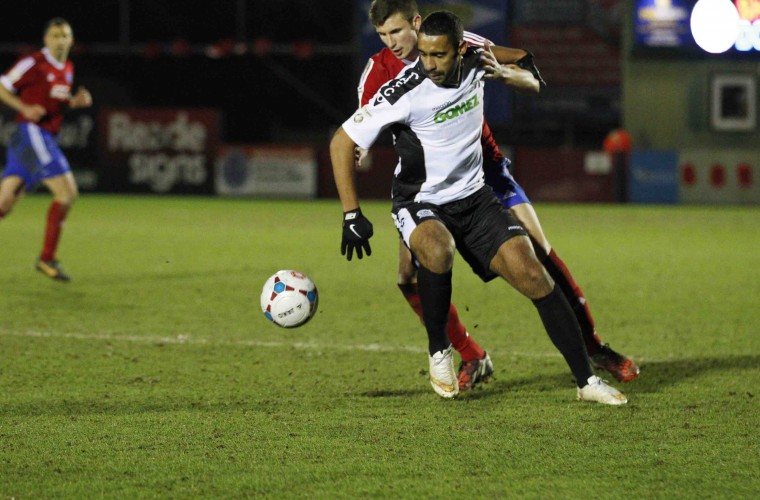 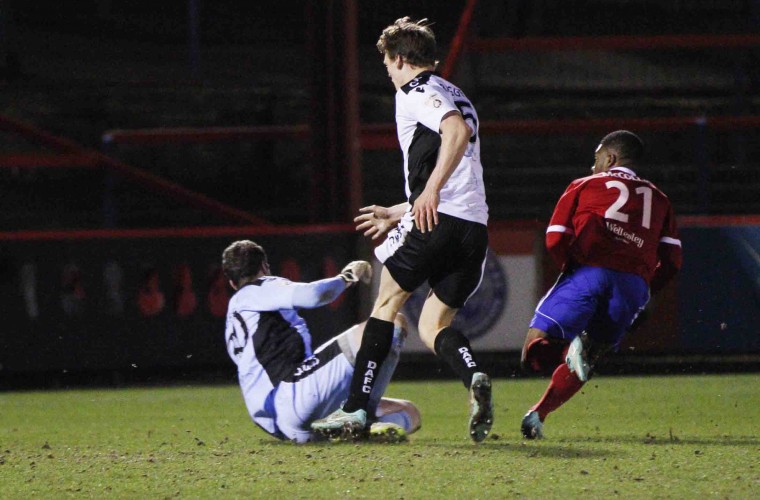 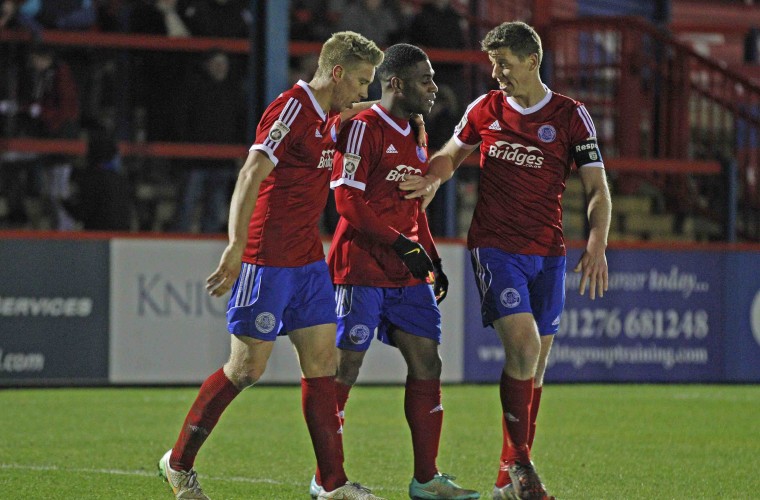 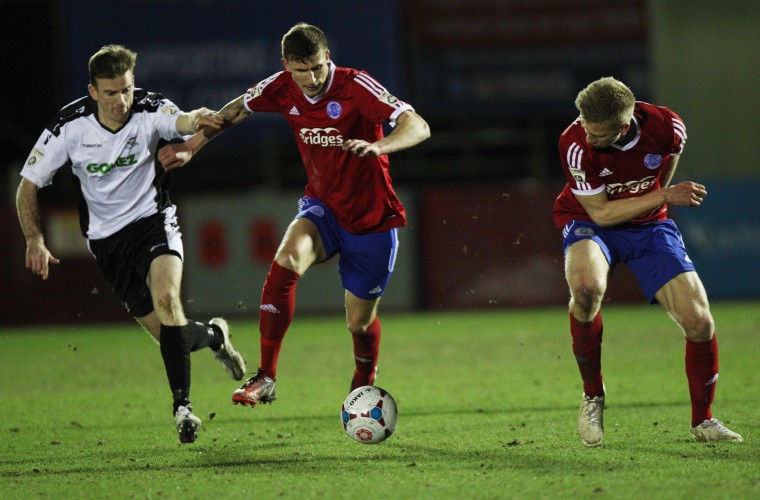 The game started off quite brightly with both sides playing an open game, showing plenty of pace and attacking intent, but both could only muster a few half chances.With the game only two minutes old it was Dover who countered well via Dan Holman who played the ball to Sean Francis who looked like he would get on the end of the pass and have a clear shot at goal. Immediately Sean McGinty tracked back well, won the ball and gave possession back to the home side, who earned their first corner after Tristan Plummer burst forward and played the ball to Antonio German whose shot was cleared behind for a corner which was well claimed by Andrew Rafferty in the Dover goal.

Dover came back at Aldershot shortly after and created their first chance of the match and it was former Aldershot Town loanee Dan Holman who forced Phil Smith into his first save of the match after he met Nicky Deverics’ cross from the left hand side. As we entered the first quarter of the match, it was Aldershot who were becoming more of a threat going forward with Tristan Plummer using his pace to give the Dover backline something to think about, winning a free-kick by the corner flag. The resulting free-kick taken by Sam Hatton created two half chances for the Shots as Jim Stevenson was unlucky not to tee himself up for the shot, with the ball eventually squirming to Antonio German who crossed neatly back into the box, only for Brett Williams to head over the bar.

The game itself went a little flat for the latter stages of the first half with neither side creating any clear cut chances, both sides had numerous half-chances but rarely made both sets of keepers work.

However, with 38 minutes on the clock, Dover produced the first goal-scoring opportunity and this came via Connor Essam who forced a fine save from Phil Smith from point blank range. His shot was followed up by Dan Holman who pounced on the loose ball from two yards out to put the ball in the net for Dover, but the linesman’s flag was raised and the goal was disallowed for offside, much to Aldershot Town’s relief. The match was in the final two minutes of the first half when Aldershot Town created an opportunity as Tristan Plummer set off on a driving run down the left, persistently cutting inside towards the Dover penalty box but could only scuff his shot wide.

Going into half-time, both sides had certainly grown into what was an open and flowing game and that was epitomised by the end to end chances just before the break.

As the teams entered the field of play for the second half, both sides remained unchanged.
The second half was only 30 seconds old when the Shots charged forward courtesy of Brett Williams who burst in from the right touchline, pulling the ball back to Antonio German whose shot was deflected out for a corner. The resulting corner was only half cleared by the Dover defence, meaning Matt Saunders was able to measure a 20-yard side-footed shot which was superbly tipped over the bar from Andrew Rafferty in the Dover goal.

It was The Shots, however who did make that all important breakthrough eight minutes into the second half via Jim Stephenson who powered in a precise close-range header which sailed past Rafferty in the Dover goal after Jaydon Gibbs put in a teasing cross. 1-0 Shots!

That goal seemed to spur Aldershot into life as they continued to press Dover who at this point had made two attacking changes, with Brett Williams and Jim Stevenson linking up well with the latter crossing a fine ball into the box, which was begging for a red shirt to connect. The ball had too much pace for Antonio German to connect though.

Aldershot Town soon made their dominance count and after 68 minutes doubled their lead and it was that man Jim Stevenson again who produced a virtual carbon copy of his first goal. This time it was central midfield partner Matt Saunders who drove in an angled cross and there was Jim Stevenson to once again cushion a powerful header into the bottom left-hand corner leaving Andrew Rafferty stranded. 2-0 Shots!

Aldershot’s second goal seemed to draw a positive reaction from the visitors, who enjoyed a brief dominant spell and were rewarded after 76 minutes on the clock as they managed to pull a goal back via Sean Francis who managed to bundle home Stefan Payne’s pull back to halve the deficit. At this point, the game was nip and tuck, Aldershot Town were trying to kill the game off once and for all, winning successive corners and Dover were desperately trying to get back into the match and earn themselves a point by pushing as many bodies forward as possible to make life difficult for The Shots.

However, with only five minutes left to play, it was Aldershot Town who sealed the three points as substitute Andre McCollin restored the two-goal cushion after getting on the end of Sean McGinty’s superb through ball, racing through, beating his man for pace and calmly slotting home to send the East Bank into rapturous celebrations!

The final whistle was greeted with huge cheers from the home fans as Aldershot Town went onto win 3-1 and deservedly extend their unbeaten run to four matches. The Shots will now turn their attentions to Saturday’s long trip away to Macclesfield who themselves have enjoyed a fine season, as they look to go on and build on tonight’s huge win and extend their unbeaten run to five matches.