The new season starts here. Many fresh names and faces in Barry Smith’s squad, ready for the first League test of the Season. The sun was shining, the pitch looked like a bowling green, and the Shots previous record for opening day victories is something to be envious of – what could possibly go wrong?

The Shots showed spells of composed, one-touch, on-the-floor football and mature defending for much of the first 70 minutes. But, Gateshead repelled attacks and performed the perfect smash-and-grab within four second-half minutes to turn the game around, leaving the Shots and the fans at the EBB wondering exactly where it went wrong? 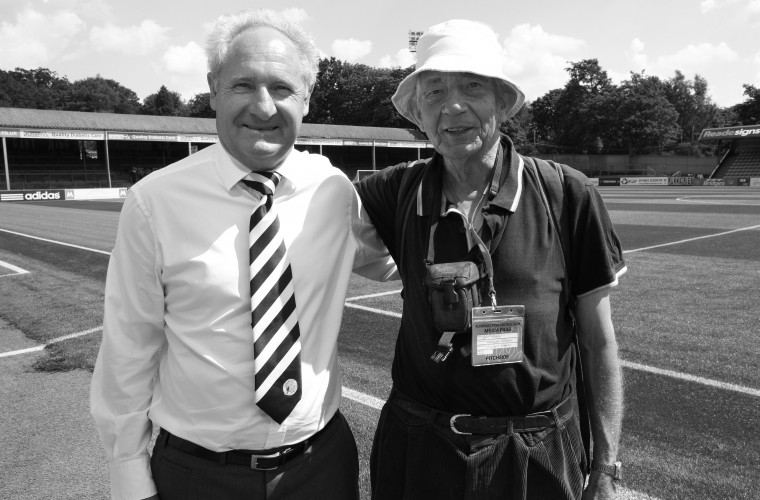 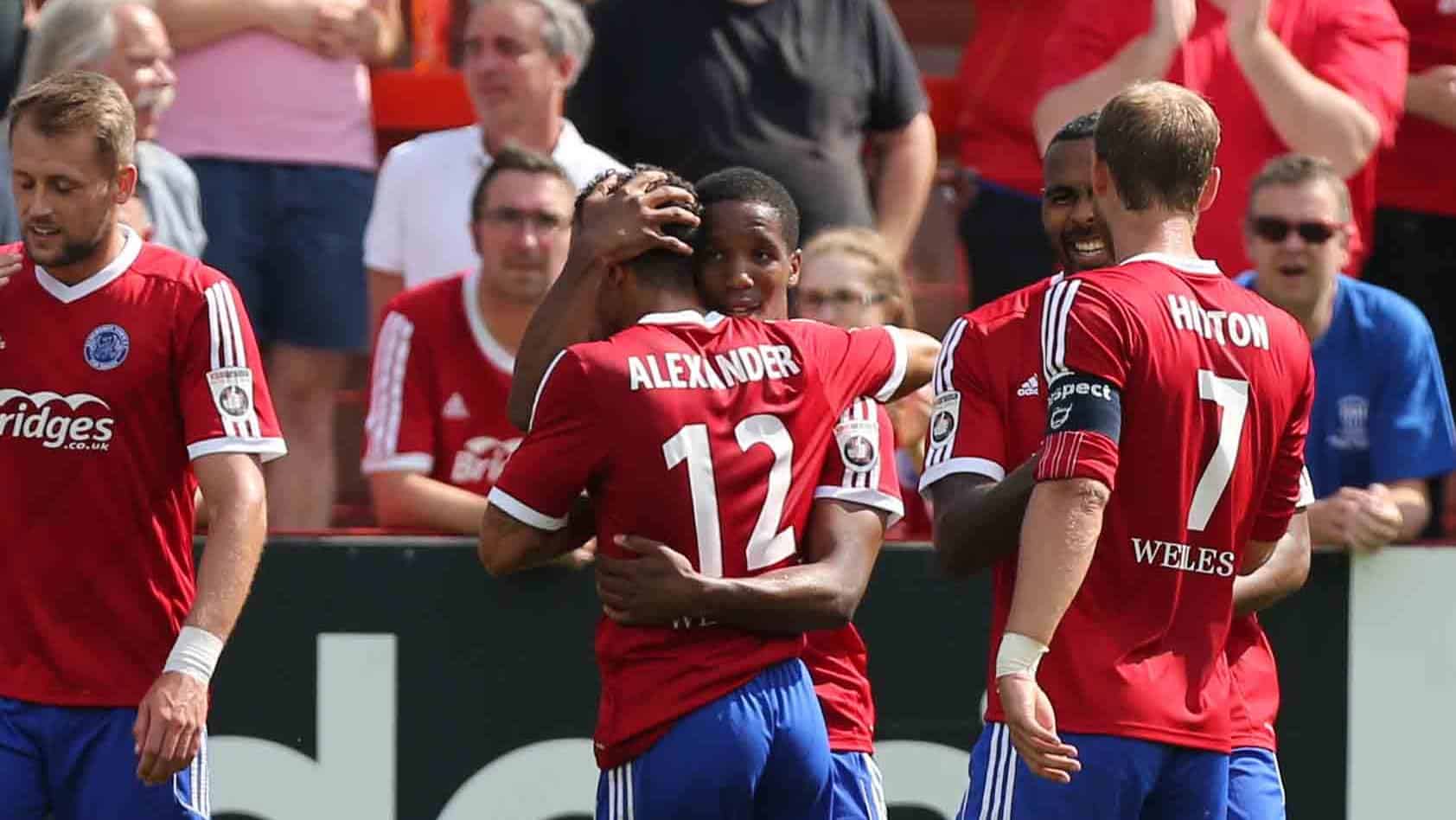 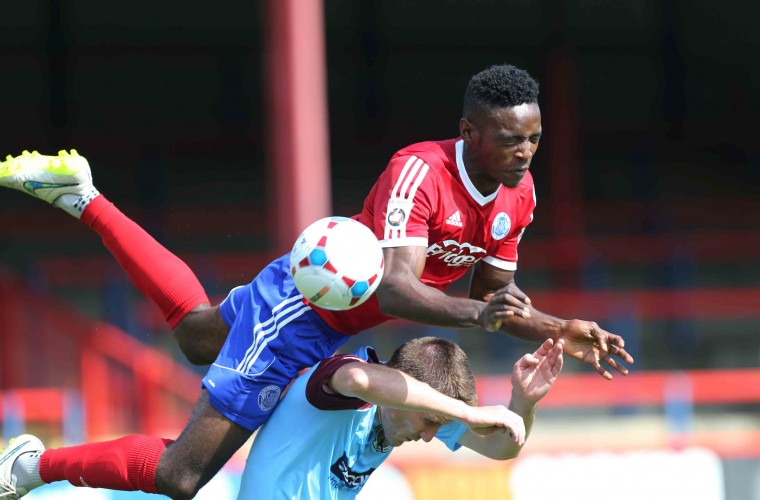 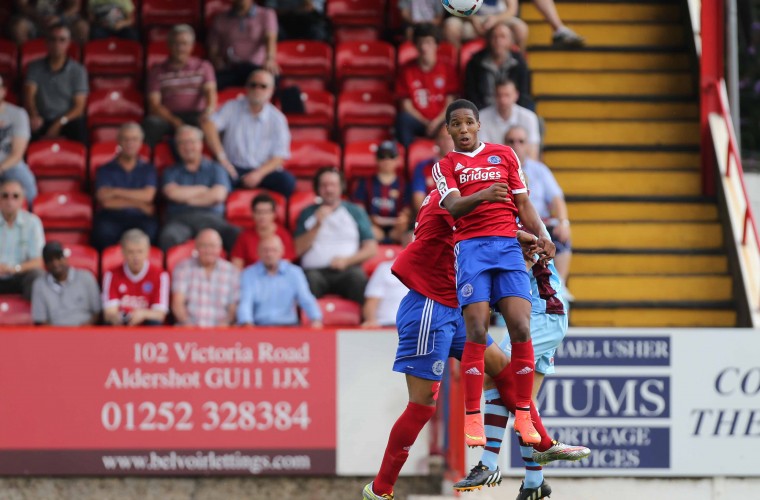 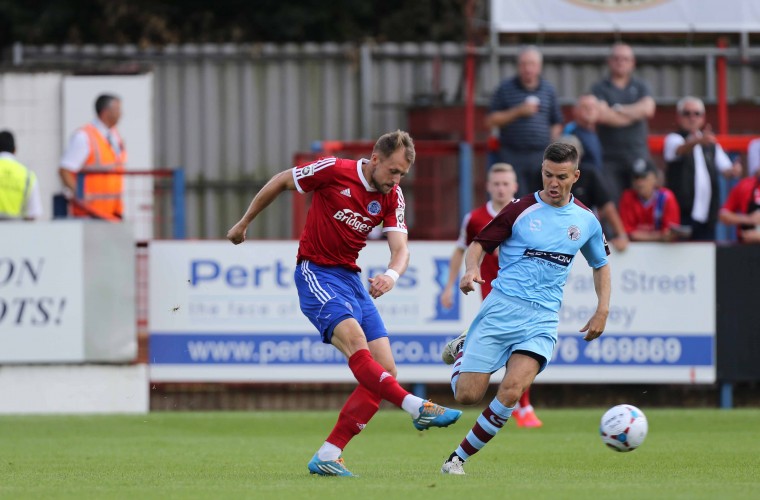 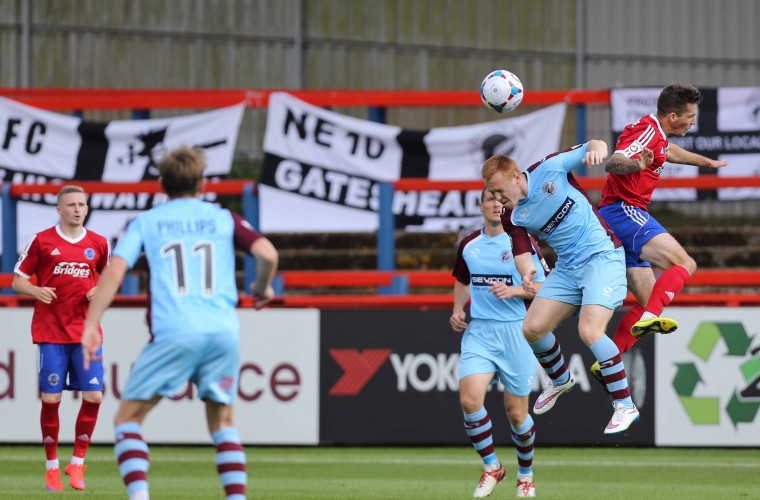 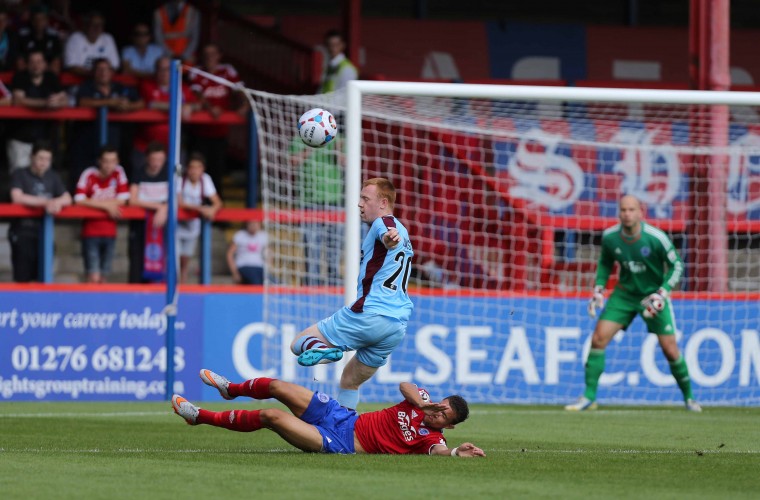 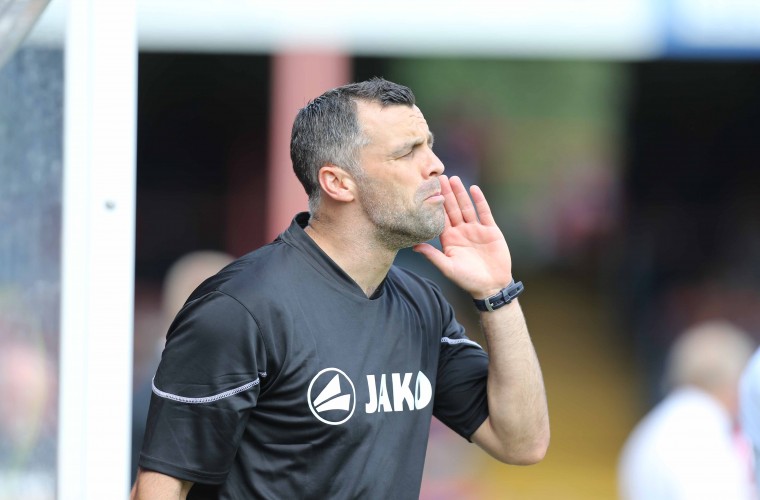 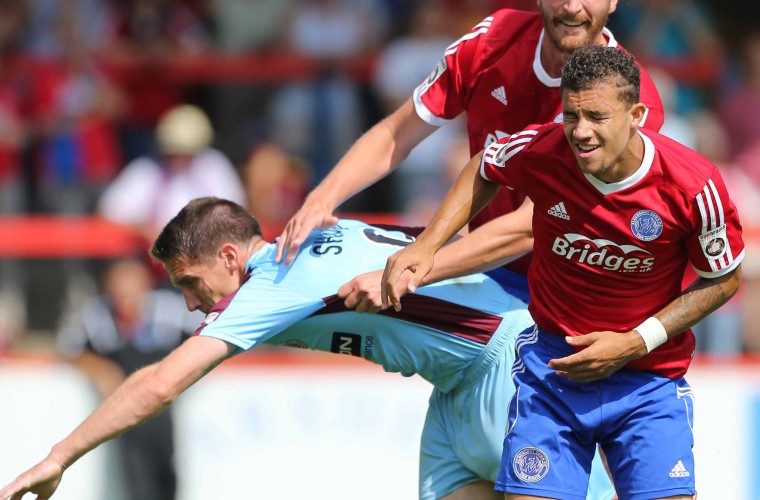 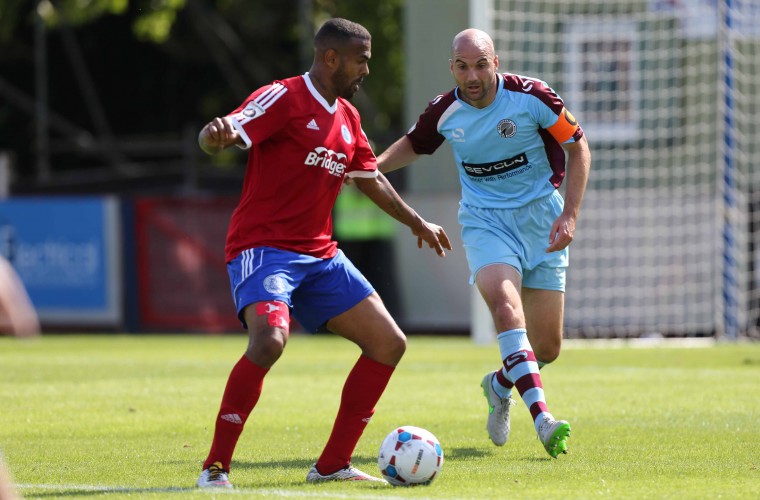 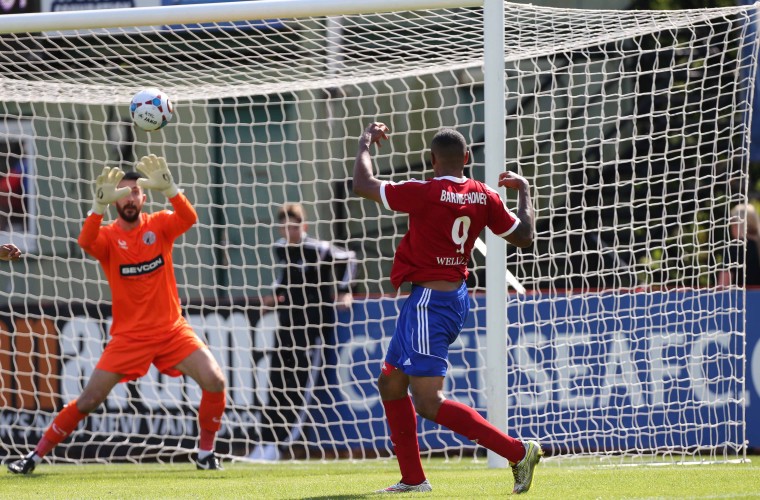 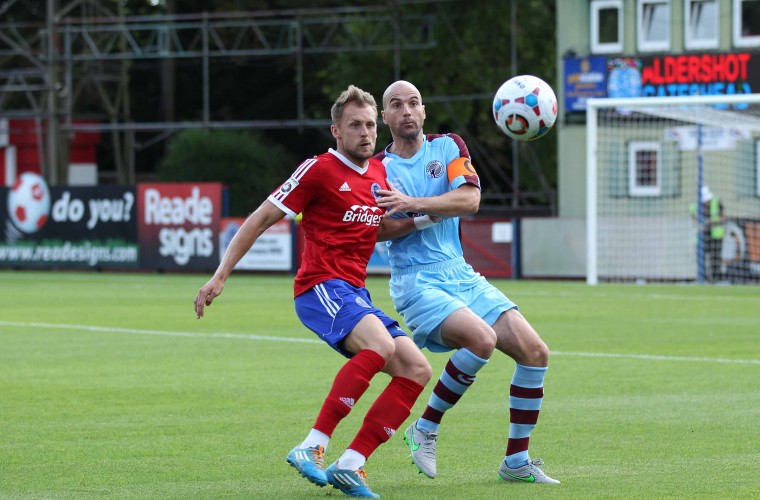 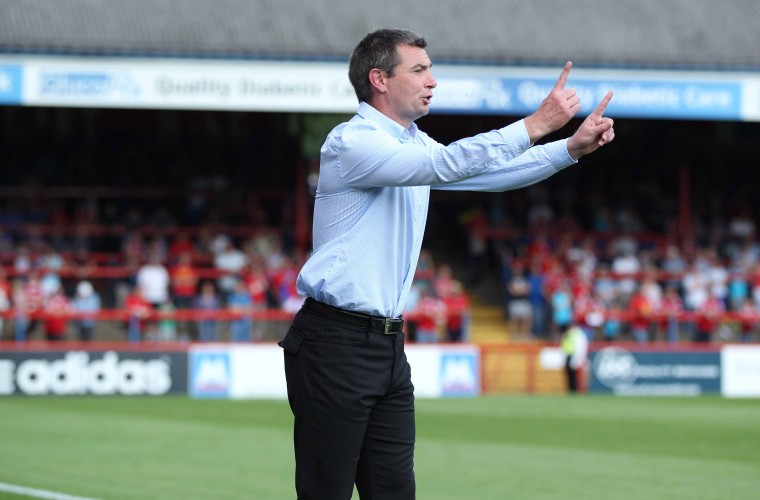 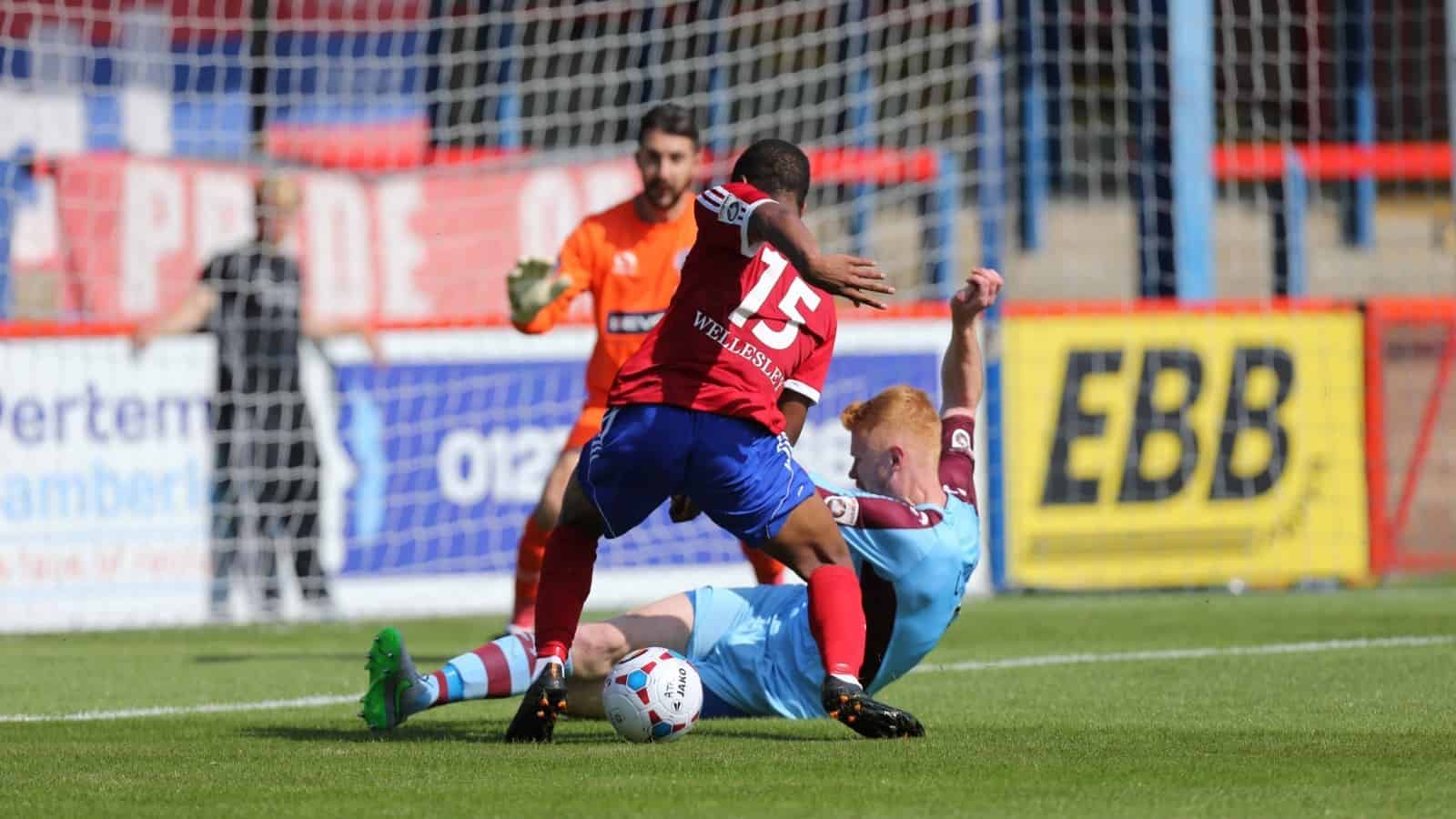 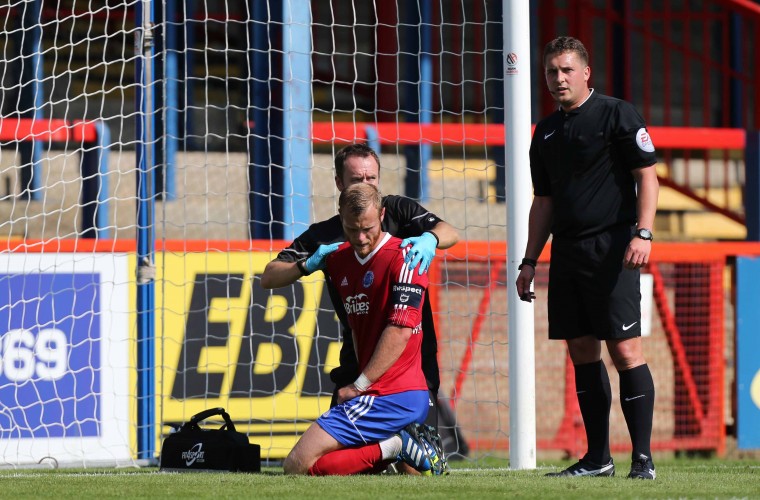 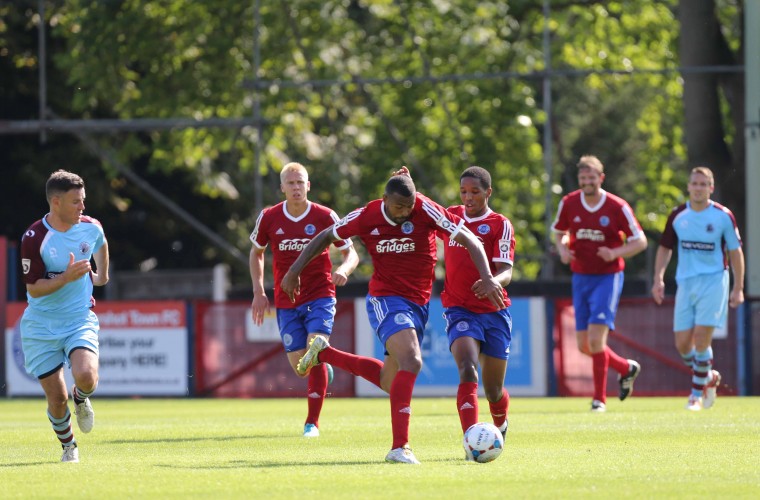 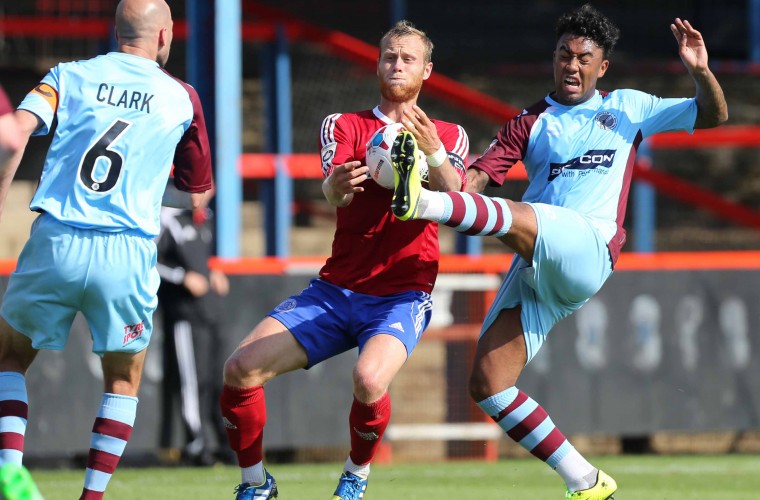 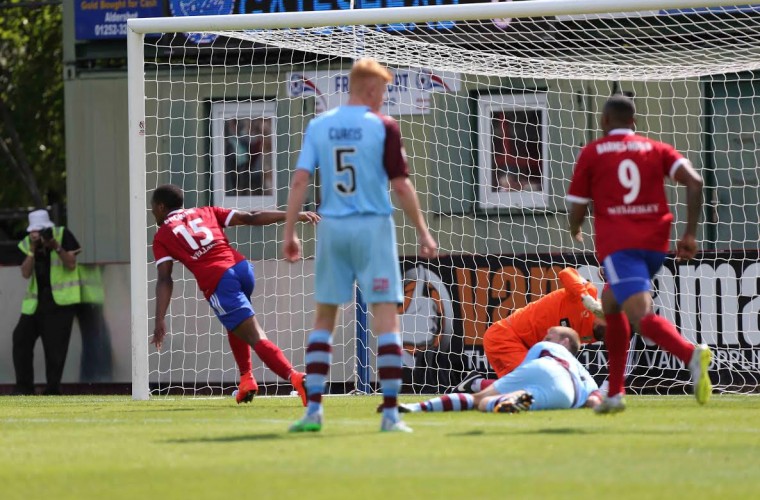 Missing McGinty and Oastler through injury, and with the same line-up as appeared in pre-season vs Wycombe, the Shots kicked-off towards the High-street end, in glorious August sunshine. And – started with real purpose.

In the first minute, with the Eastbank in fine voice, Dan Walker took advantage of a yard of space, 25yrds from goal to fire a warning shot just over Sam Russell’s bar. That set the pace of the game.

Aldershot moved the ball around on the floor at pace, and looked dangerous in spells throughout the first half. Alexander down the right always looked a threat, looking to push forward at every opportunity, combining well with Hatton on the overlap. Dan Walker, Barnes-Holmer and Stephenson were heavily involved in the forward moves, as the Shots found a lot of joy down the right flank, looking to create an opportunity.

Gateshead had moments, but looked toothless in the most-part. A few mid-half free kicks were loftily floated in, but proved no real threat to Paul Smith in the Shots goalmouth, who gathered everything inside the six-yard box (even if sometimes after a bit of pinball).

In the 21st minute, the Shots pressure paid off. A beautiful move which saw Hatton, Stephenson and Alexander combine eventually found Barnes-Holmer who was forced to the byline to the right-hand side of the Gateshead goal. He forced his way past a defender and crossed hard and low into the path of the oncoming Rhys Browne who converted sharply into the bottom-right of Russell’s net. Shots 1-0 Gateshead.

Following the goal, Gateshead began to mount pressure. The Shots got behind the ball and patiently waited for a mistake to be made. Very calm, mature defending from the new back-four who looked extremely confident throughout the first half, ensuring the pressure amounted to nothing more than half-chances, and appropriately fizzled out.

For the rest of the half, the Shots returned with their own pressure. During one play down the right, Cheye Alexander was uppended by left-back Jordan Cranston (who stepped in last-minute for injured Matty Pattison) outside of the Heed’s area. The freekick was taken quickly by Lathrope, who passed sharply to Dan Walker, receiving with his back to goal. He swiveled to create space and laced a sweetly hit left-foot shot inches over the bar.

The first half ended with Shots looking much the better team, and arguably could’ve and should’ve had a healthier lead…

The second half saw Gateshead came out looking stronger. There was a greater intensity in their midfield and that lack of time and space on the ball caused a few individual errors to creep into the Shots’ game within the initial few minutes.

This didn’t last too long however, and the Shots quickly picked up where they ended the first half, finding their stride and rediscovering their sharp passing with Stephenson, Hatton and Browne looking especially dangerous moving forward. In the 59th minute, eight outfield players were involved in a speedy build up which culminated in Sam Hatton taking a heavy touch and running into trouble. The loose ball fell to Lathrope on the edge of the area who laced the ball hard and low, but whizzed safely past the right-hand upright. A good move, which really deserved more from it.

Six minutes later, a similar situation unfolded. After mounting the pressure, Tom Richards floated in a ball from the left wing into the Gateshead area. Sam Hatton, with great composure, and under tremendous pressure, took the ball down on his chest only six yards out, waited for it to drop, and volleyed hard goal-wards with his left foot. Unbelievably, the ball was being retrieved from the Eastbank rather than Russell’s goalmouth. It should’ve been game-over, and the Shots were soon about to pay for not taking their chances.

As the second half progressed, the Shots began to look tired and lacking in concentration. A lot of players began to find themselves a yard or so off of the pace, and the Gateshead pressure began to mount. Defensively however, the Shots still looked to be in good shape, and dealt ably with anything that reached the backline. But the ball was beginning to reach them more and more frequently.

In the 75th minute a corner from the right-hand side of goal was swung into the Shots’ area. It wasn’t dealt with effectively by any means, and the Gateshead line of attack was allowed several bites of the cherry before the ball eventually and fortuitously fell to substitute Ryan Bowman who directed the ball across the line. Shots 1-1 Gateshead.

It was beginning to feel somewhat inevitable that this was going to happen with the previous chances not taken, and four minutes later the problem doubled.

From a cheaply conceded freekick near the corner flag, a textbook delivery found Ryan Bowman again, this time rising highest in the penalty area to power a header past Smith. 79 minutes gone and the Shots were now looking at a defeat, when 15 minutes previous they’d looked relatively comfortable. Shots 1-2 Gateshead.

The final 10 minutes were played out in typical fashion. A double-sub from Barry Smith saw Lathrope and Stephenson make way for Charlie Walker to bolster the attacking options, and Jack Saville to come and allow Tom Richards to push forward into midfield.

Gateshead closed the game out effectively, running the clock down whenever possible and getting bodies behind the ball to protect their lead. The Shots looked frustrated by the end, and just couldn’t find a way to break down Gateshead in the manner of which they had done throughout periods of the first half. After three minutes of added time, the match ended; Shots 1-2 Gateshead, leaving the Shots empty handed with the scoreline exactly the same as it was the last time Gateshead graced the EBB in November 2014.

An encouraging display, with some impressive patches of play. Overall a fairly decent performance which should fill the Shots’ faithful with confidence for the coming season, however, no one aside from Gateshead and the 44 traveling fans from Tyneside will be feeling please about the result.