On a beautifully sunny day at the ESS, both The Shots and visiting Chester FC were looking forward to a match that was in theory, a stress-free encounter, seeing as both sides had secured Conference status for next season already. 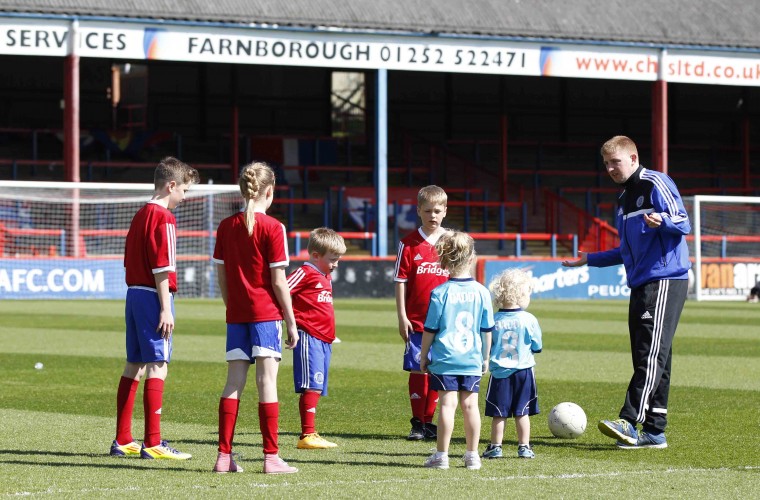 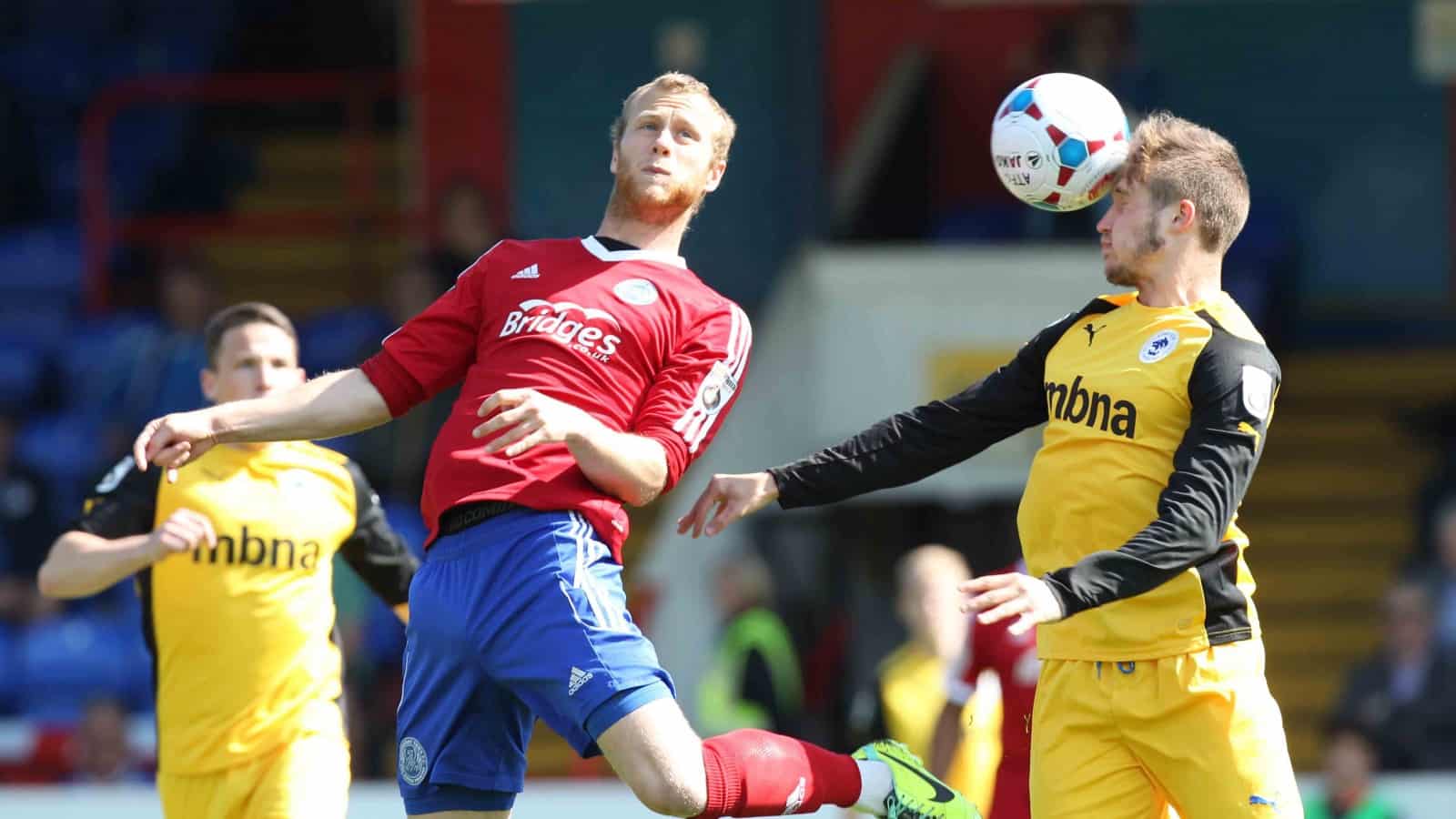 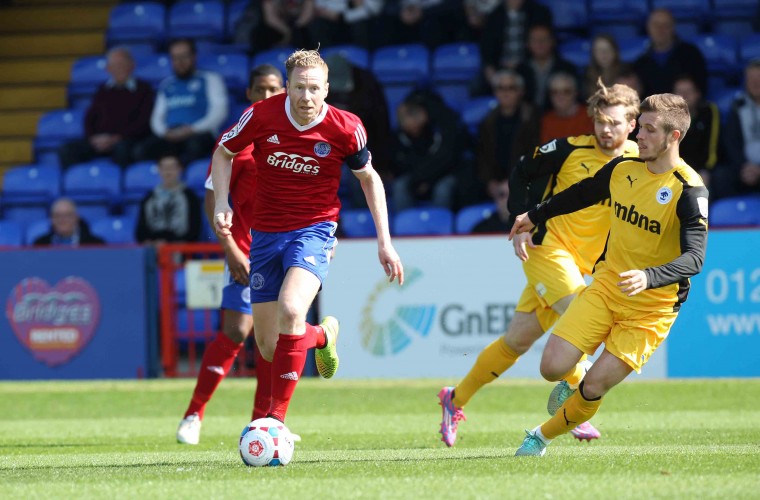 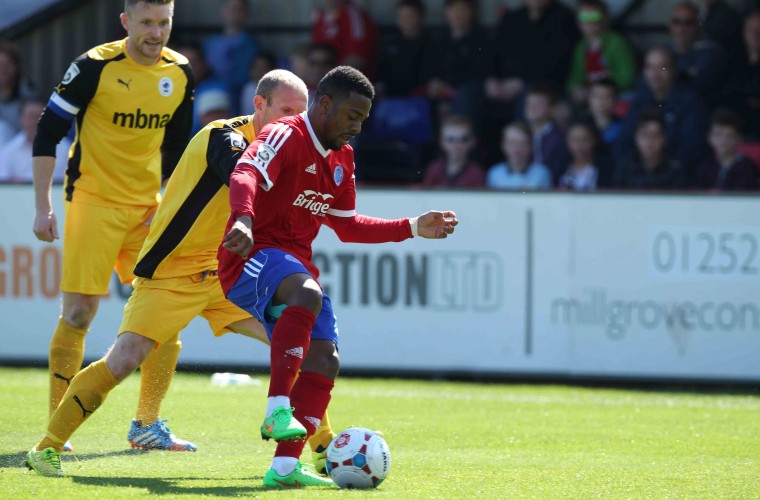 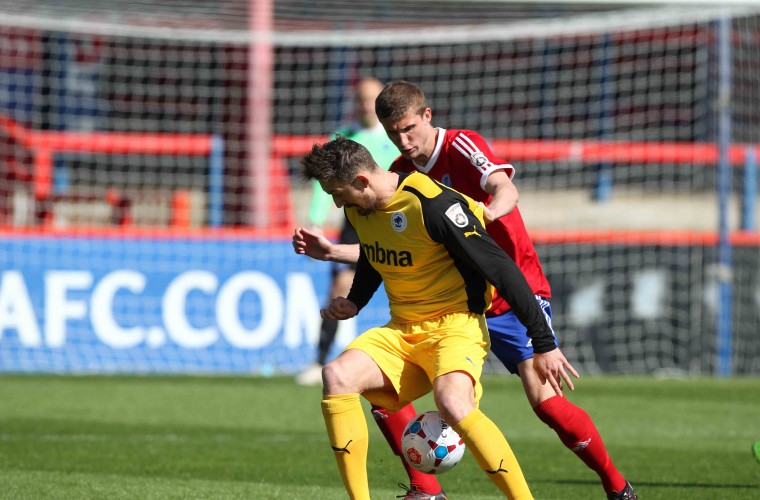 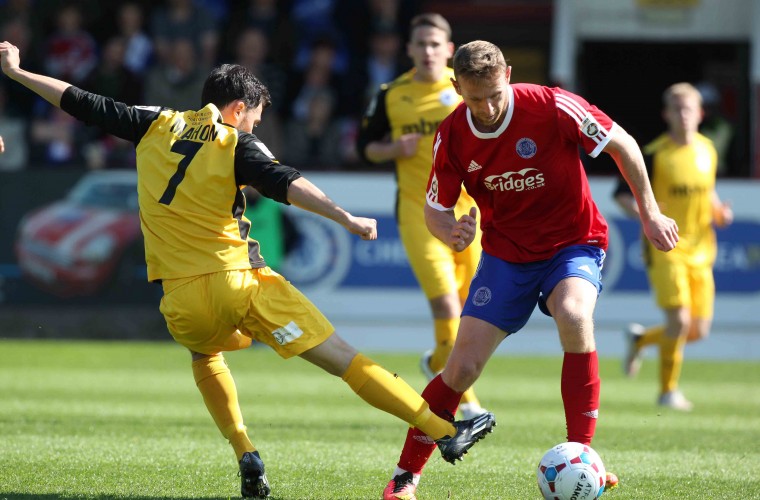 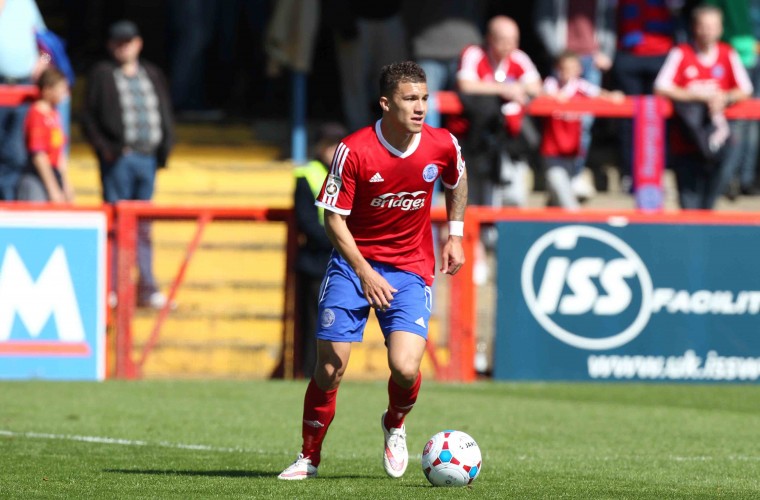 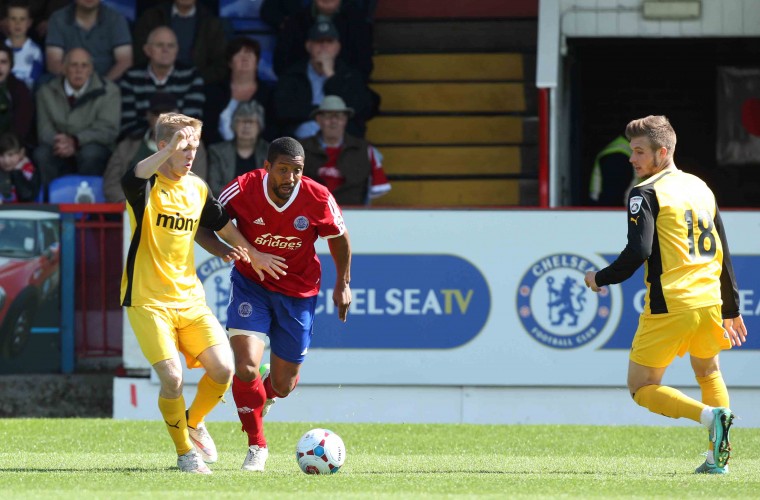 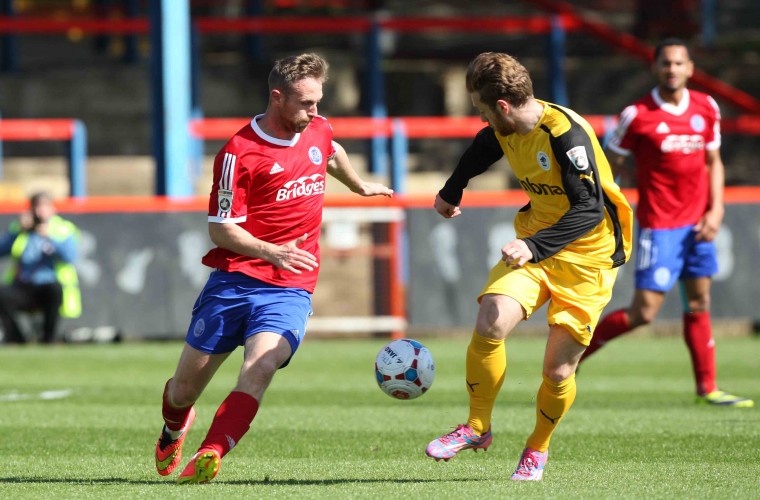 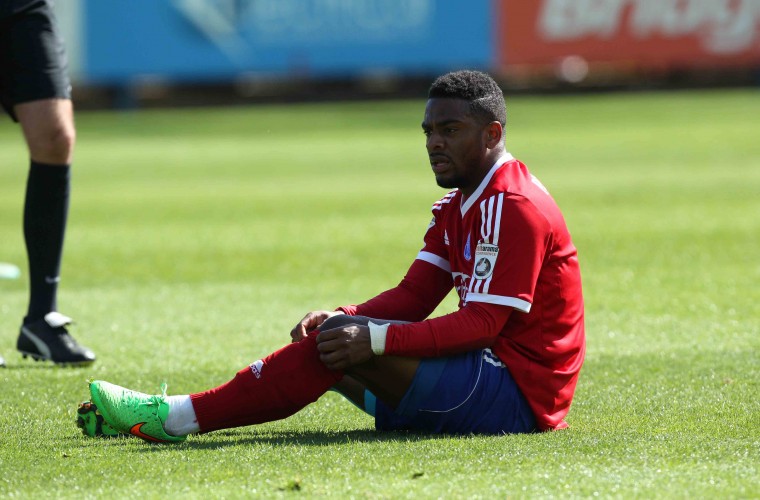 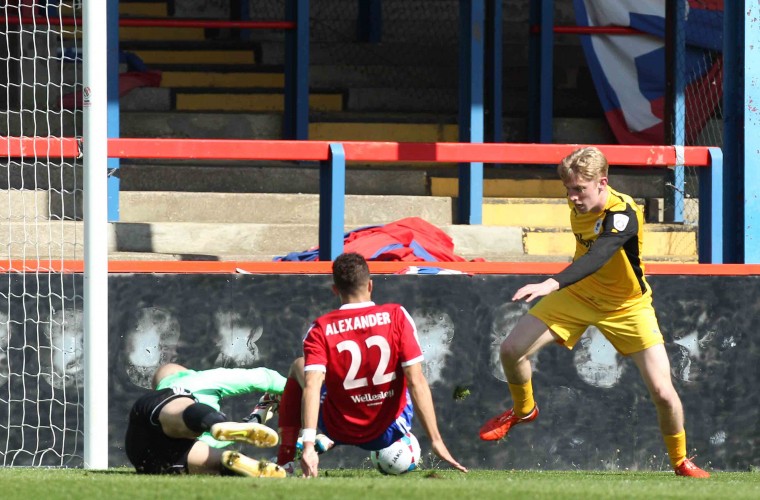 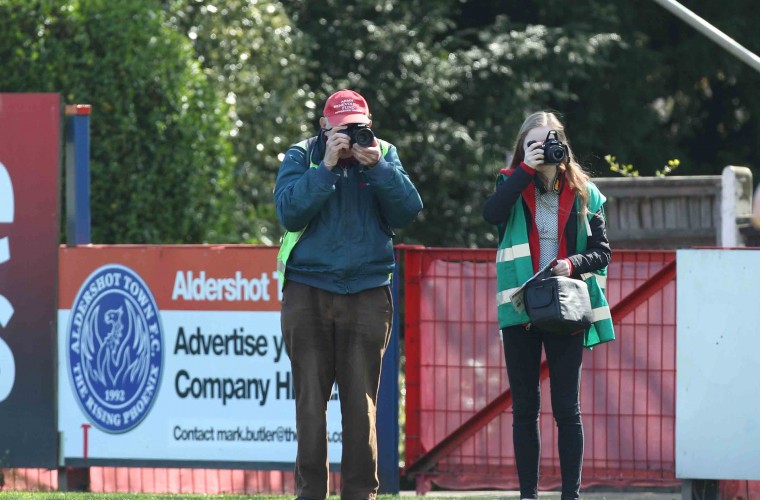 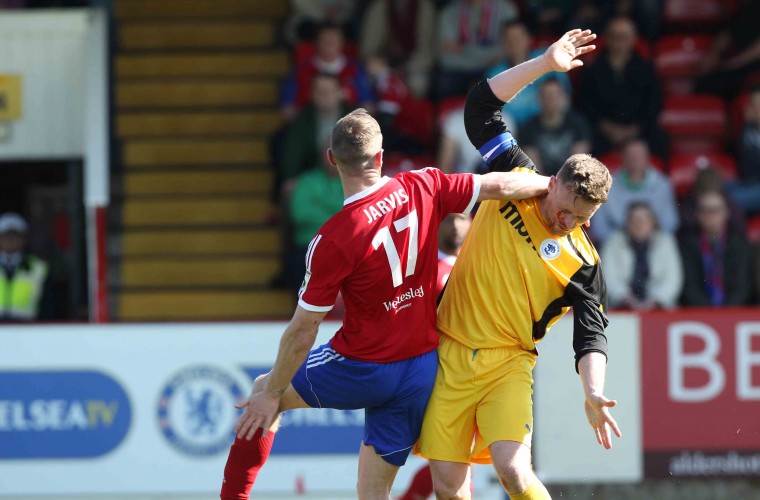 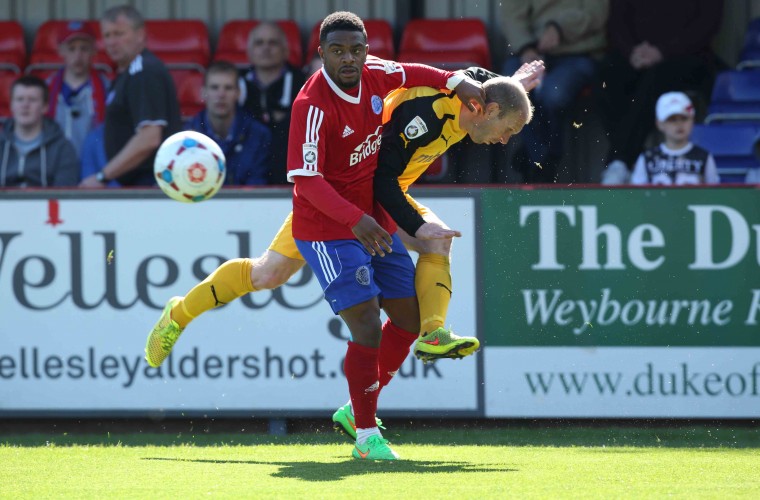 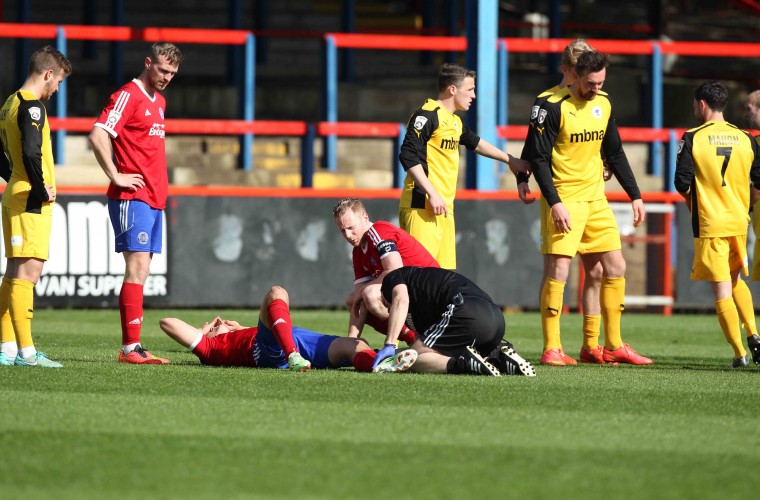 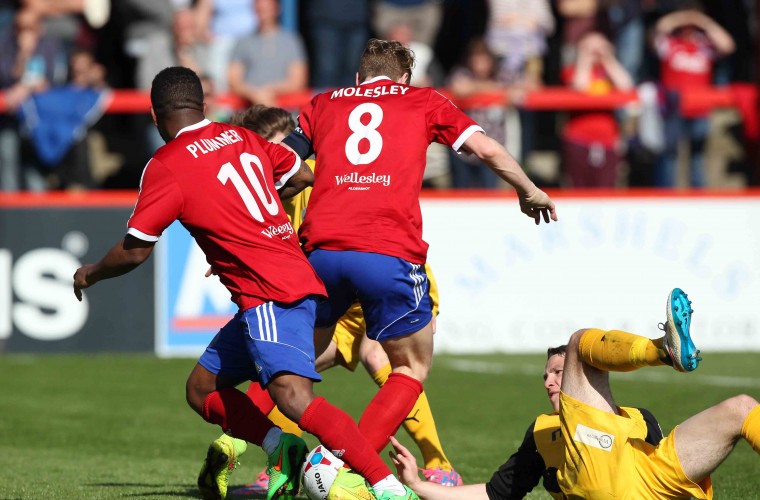 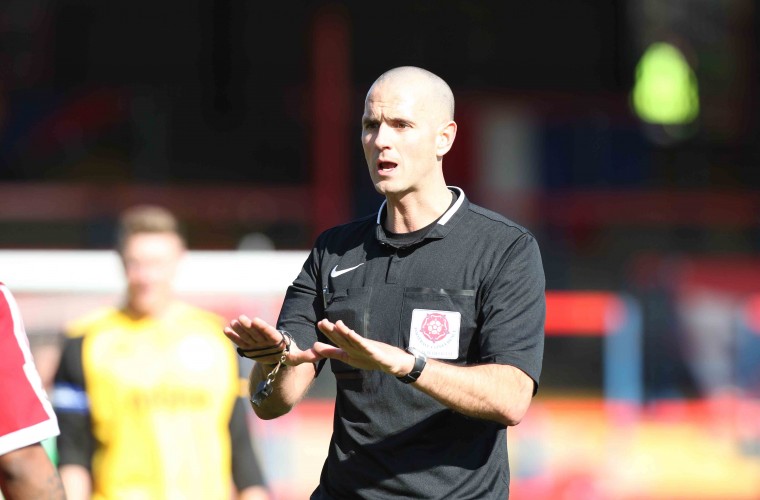 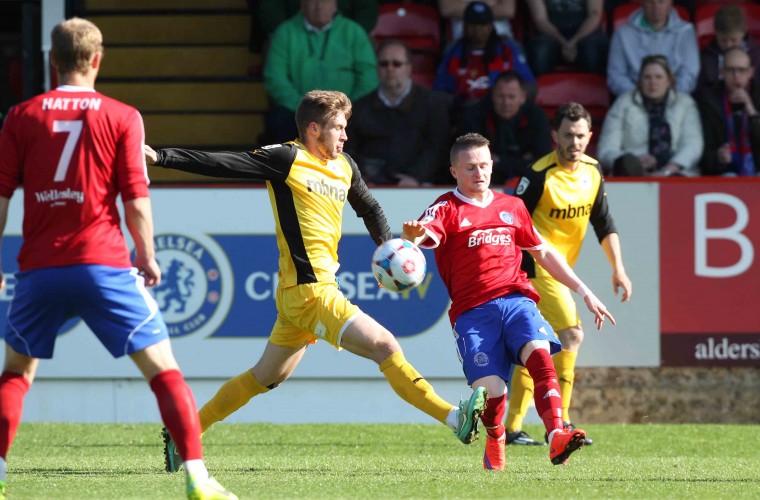 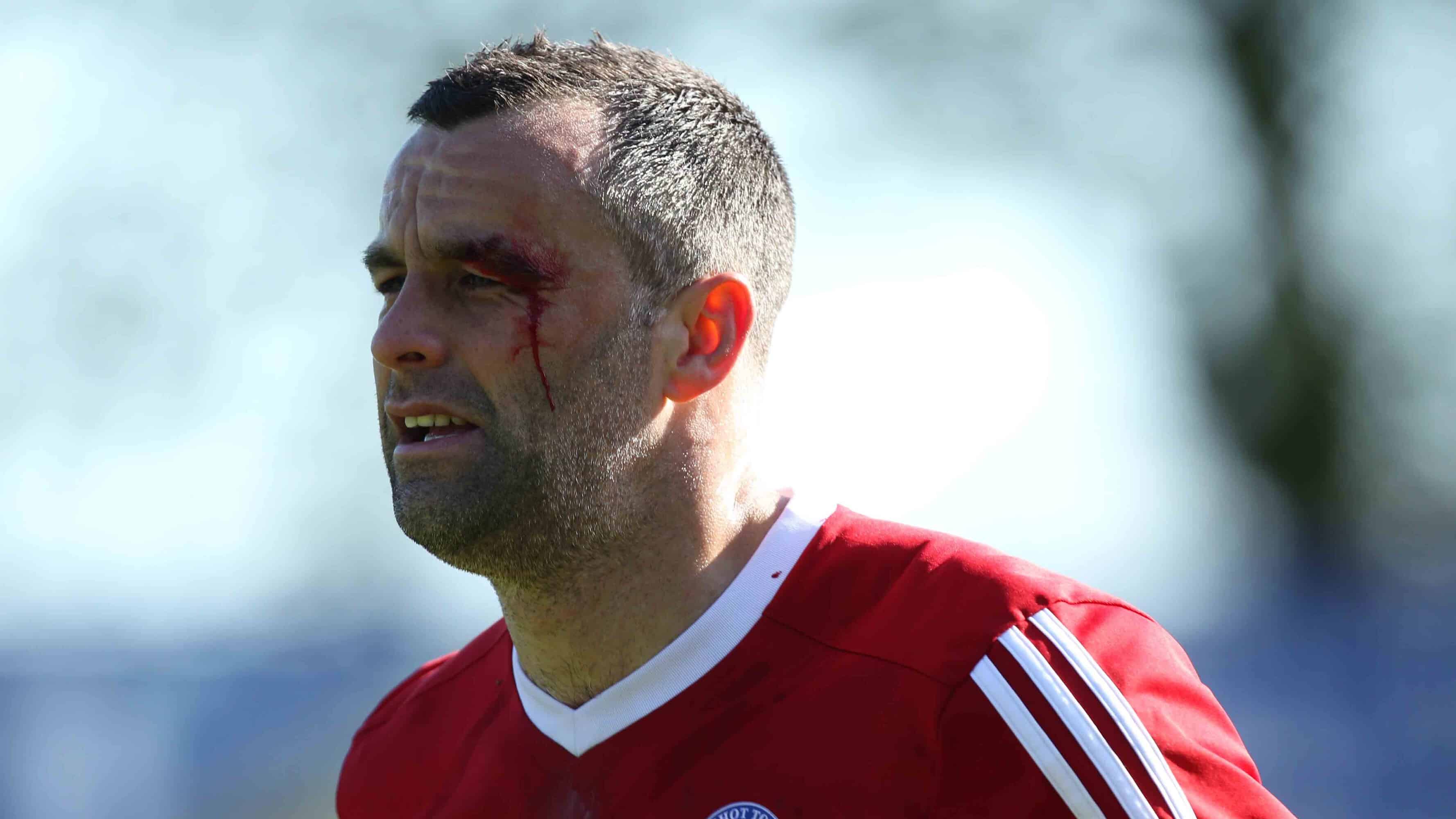 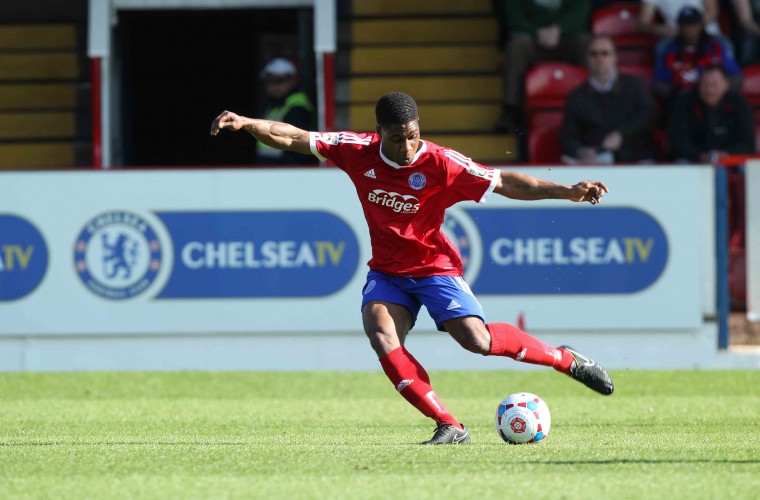 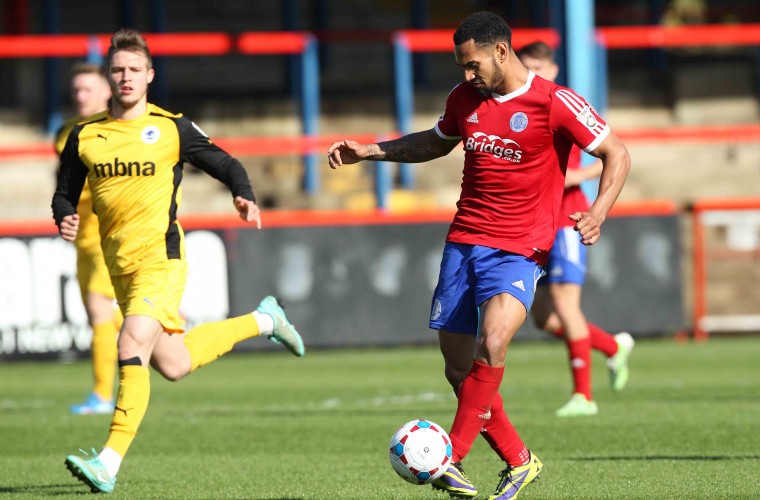 This penultimate home game of the season saw The Shots line up with the usual 4-4-2 formation, but with only a few players in what could be considered their ‘natural’ position.

Injuries to Oastler, Wilson and Gibbs, meant that Chris Barker, who had just recieved the ‘Supporter’s Player of the Year’ award took up the CB position paired with Sean McGinty, flanked on either side by Jordan Roberts and, receiving his home debut, Cheye Alexander.

The midfield saw Molesley paired with Hatton in the centre, with Plummer and Josh Scott on the wings, leaving the usual figure of Williams upfront, accompanied by Ryan Jarvis.

The match began with Chester kicking-off towards the East Bank end and enjoyed the first few minutes of possession finding their feet and stringing passes together around the middle of the park. It was an unsettled initial period, with both sides, initially, looking quite relaxed.

On the 4 minute mark, The Shots began to gain a footing in the game and Molesley grew in force in the centre, threading passes to Williams and Plummer in turn, but to no end product.

The first nervous moment occurred in the 9th minute, when a long clearance by Kay caught McGinty off-guard and Smith was forced to exit his area to intercept the through-ball. Smith claimed possession, but awkwardly passed the ball back across his open goalmouth, fortunately, finding a red shirt.

By the 13th minute both sides were enjoying brief spells of possession. A forward ball from Chester forced Chris Barker to break out of the defencive line to intercept, and his heavy touch took him deeper into midfield and into the path of a yellow shirt. Barker took a heavy knock and looked to be in some discomfort, but waived away the bench’s anxious looks. Seconds later, whilst still shaking off his knock, Barker was facing the tricky McBurnie as he weaved his way into the Shots 18yrd box looking for space. Barker stuck out a leg, bringing McBurnie down, and with no complaints from anyone in a red shirt, referee Mr Nigel Lugg pointed to the penalty spot.

John Rooney stepped up, sent Smith to his right whilst sending the ball to his left. 0-1 Chester.

Chester grew in confidence and began to dominate possession in this first period, however, the next opportunity did fall to the Shots. Molesley slipped a well-weighted pass through to Plummer, who cut inside and was clattered by Charnock. Jordan Roberts took the freekick, from approximately 25 yards to the right-hand side of goal and forced Worsnop into a save down to his nearside post. He could only parry the shot away and Williams was first to react to the free ball but could only lace the shot into the side-netting. A huge relief for Chester.

The rest of the first half saw all further chances fall to yellow shirts, with Mahon’s footwork down the right wing and Craig Hobson’s height causing a multitude of problems for The Shots. Balls into the box caused issues for the Shots defence who each time managed to escape with Chester really not making full effect of their chances.

The fans were relieved to see Chris Barker, who was visibly struggling in periods of the first half, first out of the tunnel to resume play.

The second half began with the same fast-paced, intensity of the first half. But this time, with a more even share of possession. The first attack was from the Shots, which resulted in a corner where Sam Hatton could only find the first man.

The next attack came from Chester, where Hughes and Hobson forced an exceptional double save from Phil Smith, the second of which was negated by the offside flag which had been raised by the official on the nearside. But again, a huge chance for Chester to extend their one goal lead, wasted.

Williams picked up the ball just inside the Chester half and pressed forward with intent, he skipped past two challenges but as he pressed towards the 18yrd box was scythed down by Kay with a wild lunge. The result was a yellow card, and a freekick that Roberts could only plough into the wall.

Roberts was again involved in the next chance, but this time at the other end. A mistimed tackle allowed McBurnie to find a yard of space, cutting inside onto his left foot and shot hard and central into Smith’s mid-drift. An easy save, and another squandered half-chance.

The intensity of the match, and frustration for both sides was becoming more and more visible. No one told these two sides that this match was meant to be stress-free.

The next ten minutes saw changes for both sides. Firstly, Josh Scott was replaced by Tom Richards, McCollin replaced Matt Jarvis and lastly debutante Cheye Alexander made way for Giorgio Rasulo. Chester’s Mahon and Hughes made way for Thompson and Peers.

The change in personnel saw Hatton drop to RB, with Richards filling in at LB. Roberts then moved up into CM with McCollin joining Williams upfront and Rasulo taking position on the left side of midfield.

Plummer found space down the left wing latching onto a long cross-field pass and burst forwards towards the Chester area. He cut inside and flicked the ball out to the overlapping Roberts who laced the ball powerfully high and wide. One of the better chances the Shots had to make the scores level.

Rasulo, Molesley, Roberts and Plummer were beginning to dominate the centre areas of the pitch in the latter stages of the game as Chester began to become more defencive. These passes allowed Molesley to fire off a strong shot from 20 yards which Worsnop was equal to, and minutes later, Rasulo found himself on the byline but his cross couldn’t find a red shirt in the Chester penalty area.

Back in defence, the warrior-like Barker received another knock for his troubles and had to receive treatment for a cut to the eyebrow, returning to the field with a Butcher-esque head bandage.

The final ten minutes saw all the chances fall to red shirts, with McCollin, Williams and Roberts all having half-efforts saved and cleared, but nothing was forceful enough to beat Worsnop. Chester held on with relative comfort and the game ended 0-1.