In a game where both Aldershot Town and Bradford City were both daring to dream of a successful cup run, both must wait until they meet again on Wednesday 18th before their fates are decided following a 0-0 draw at the EBB Stadium in the first meeting of the two sides. 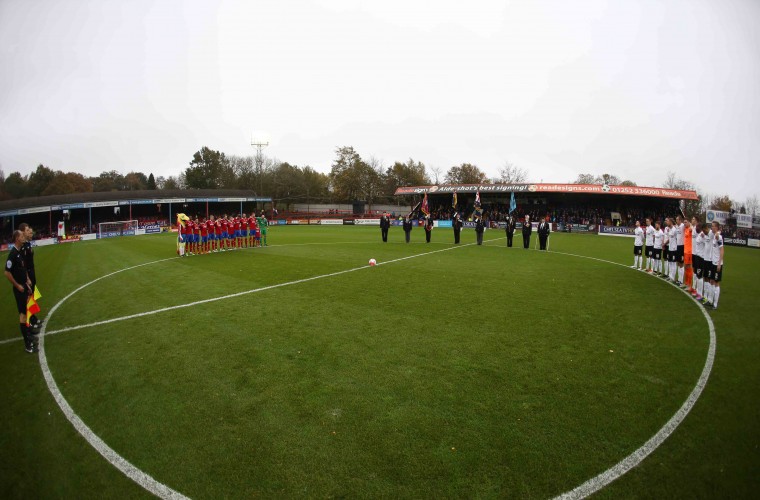 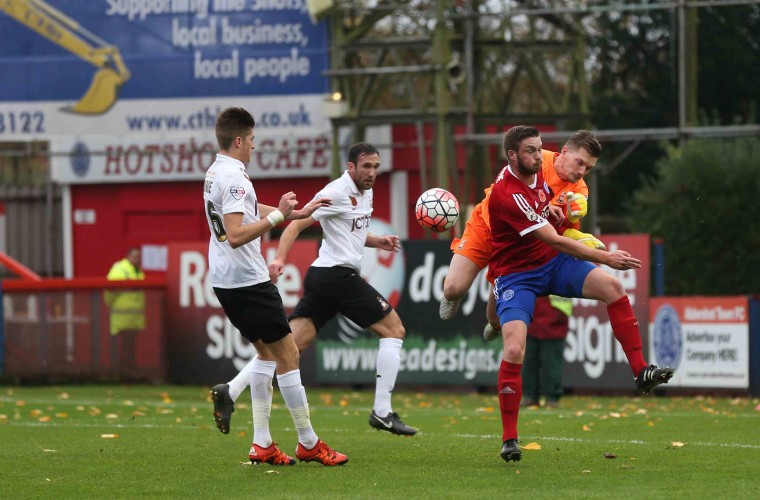 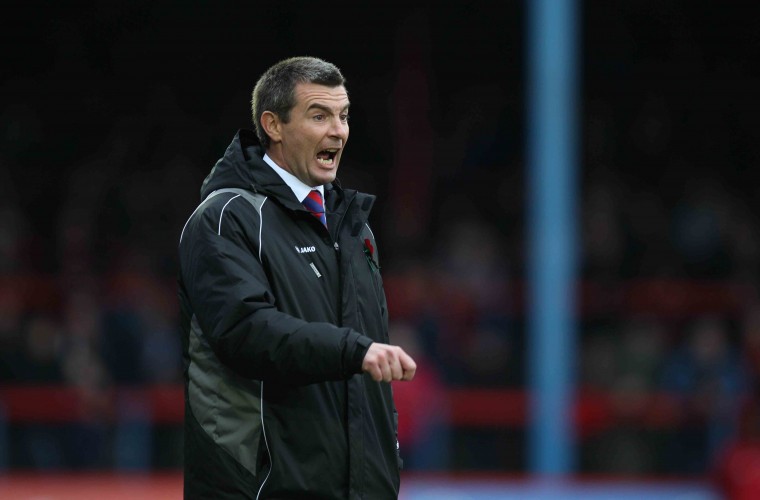 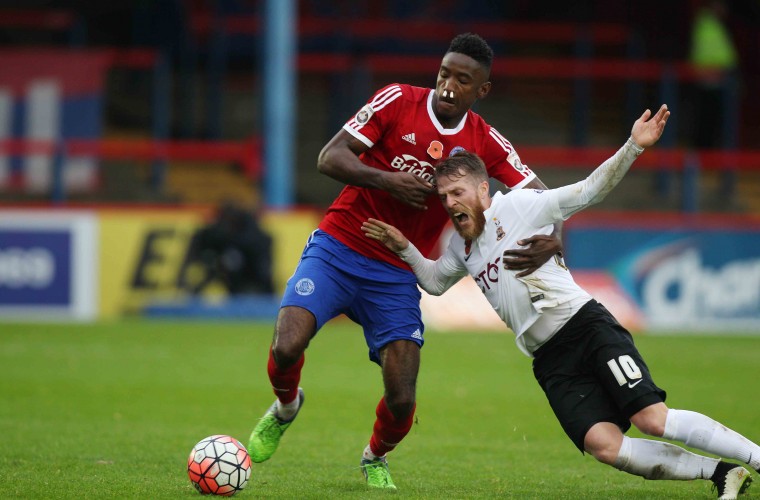 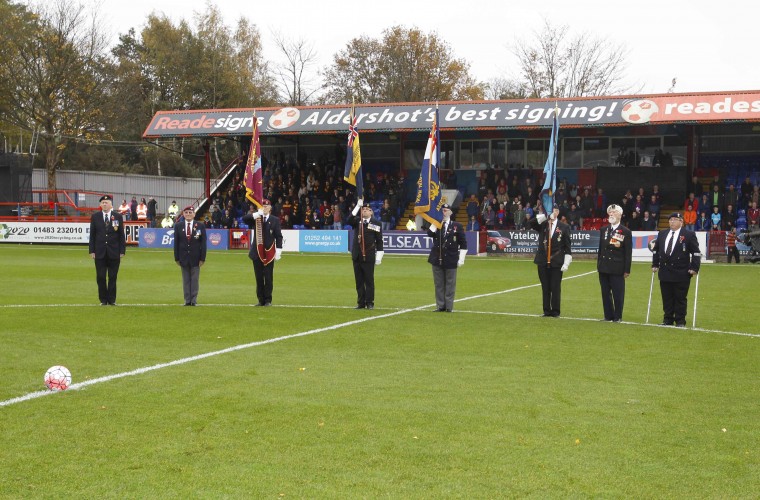 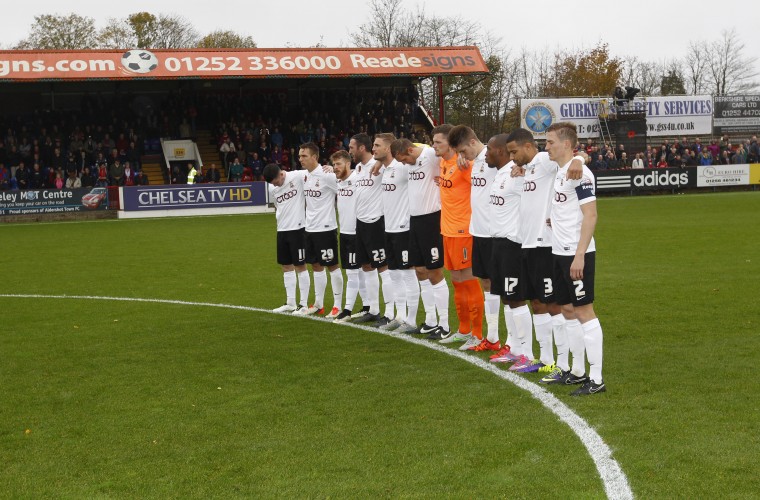 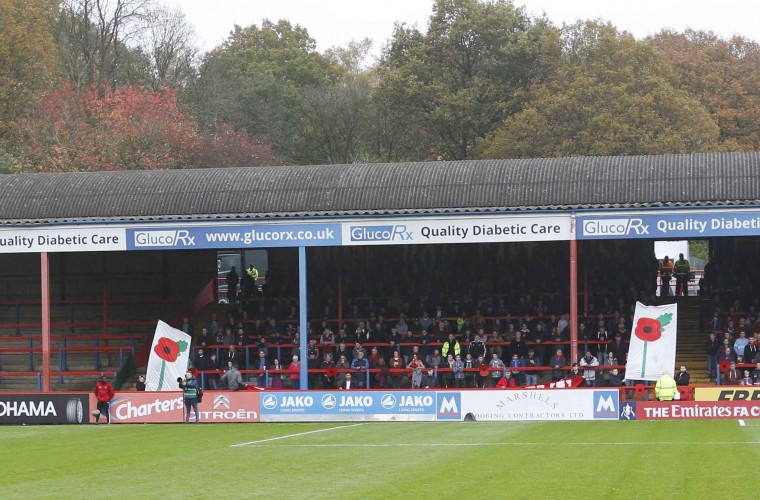 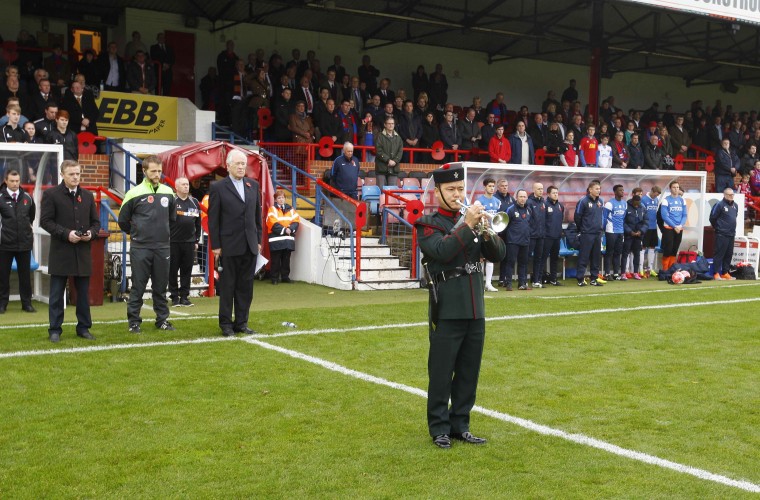 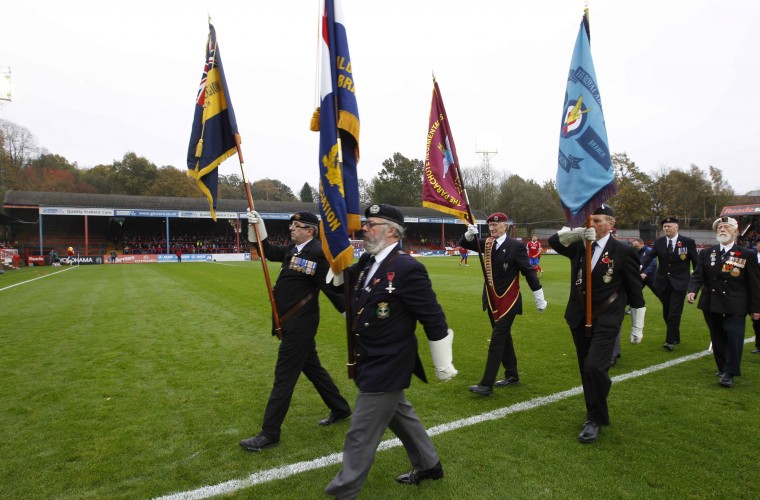 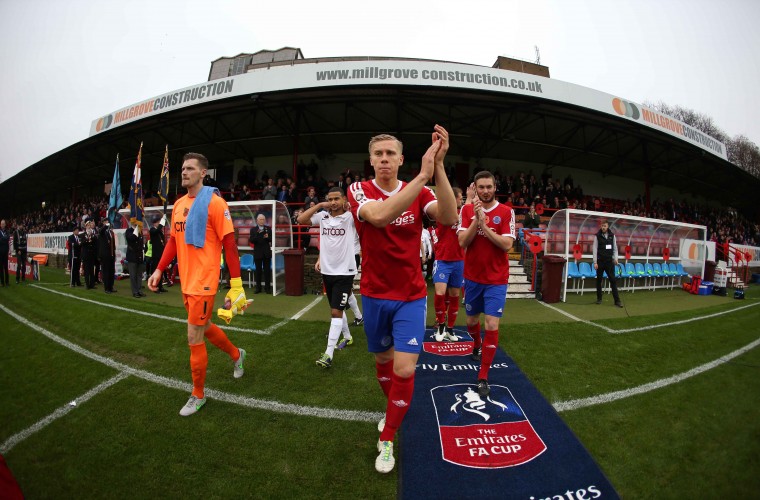 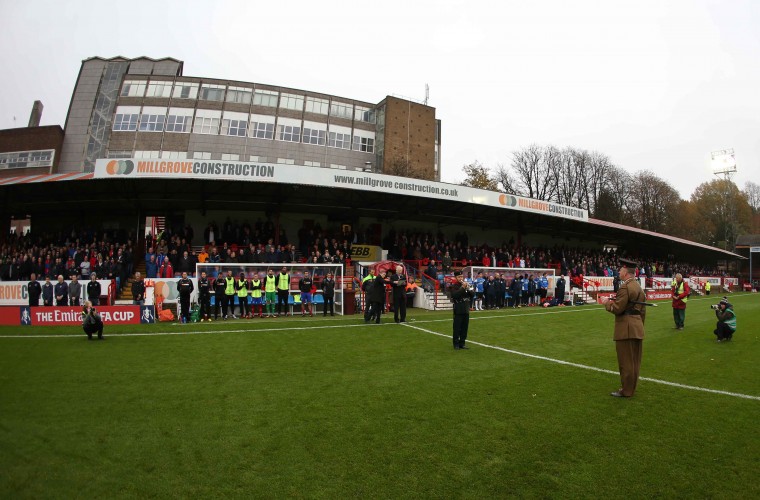 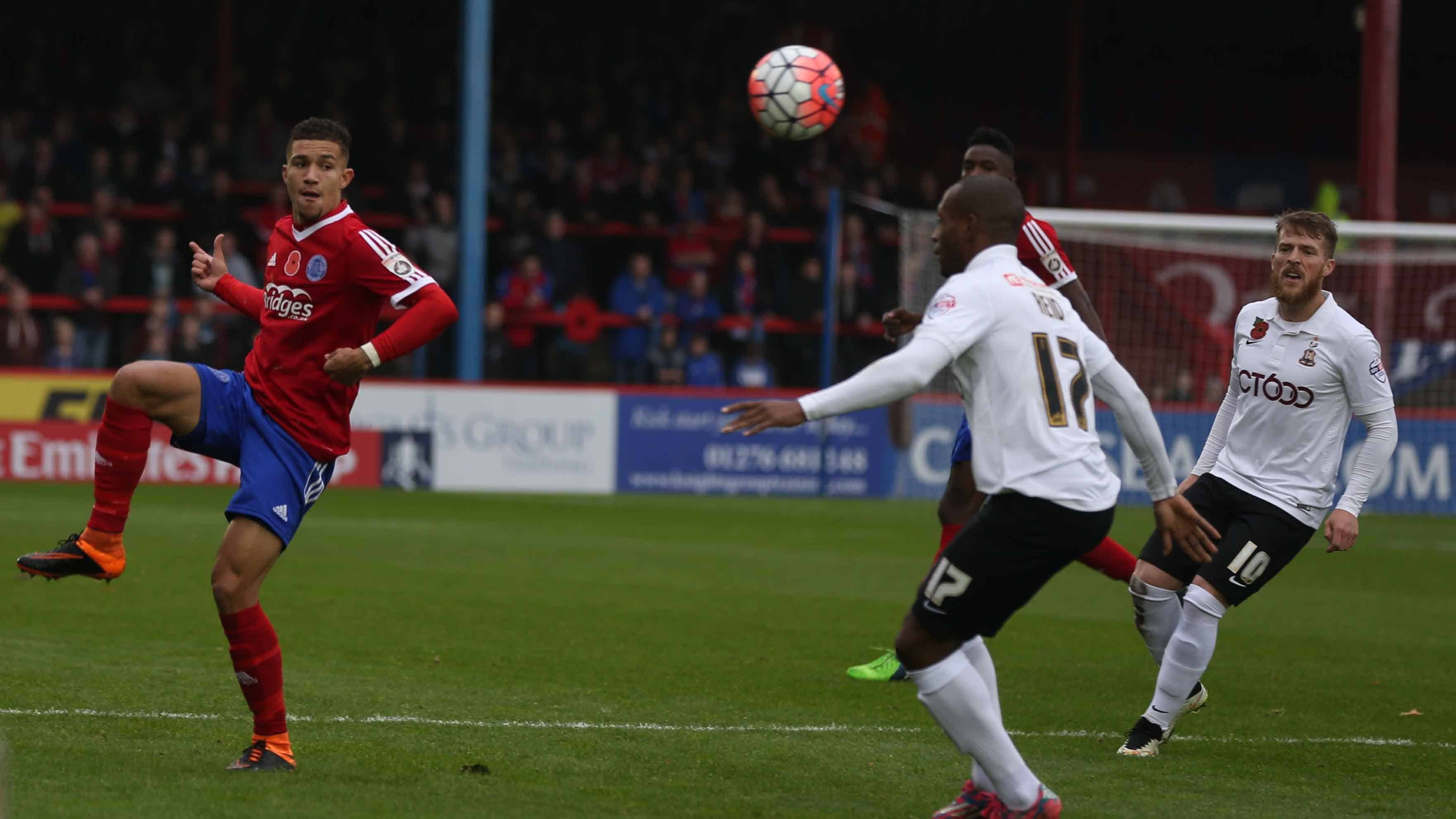 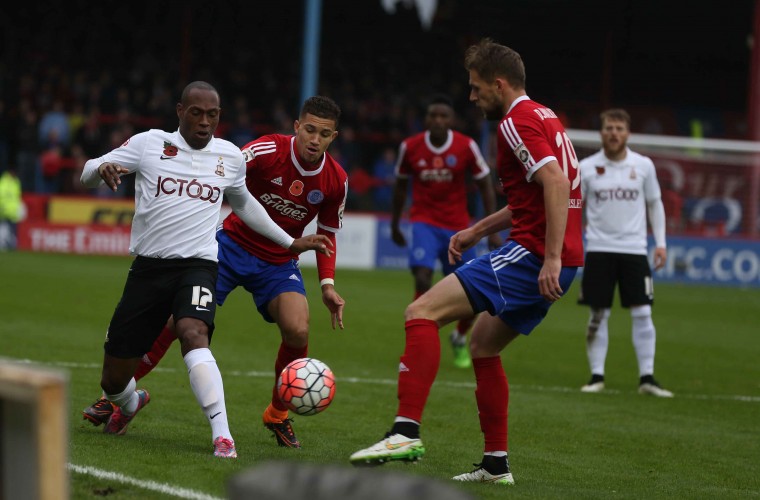 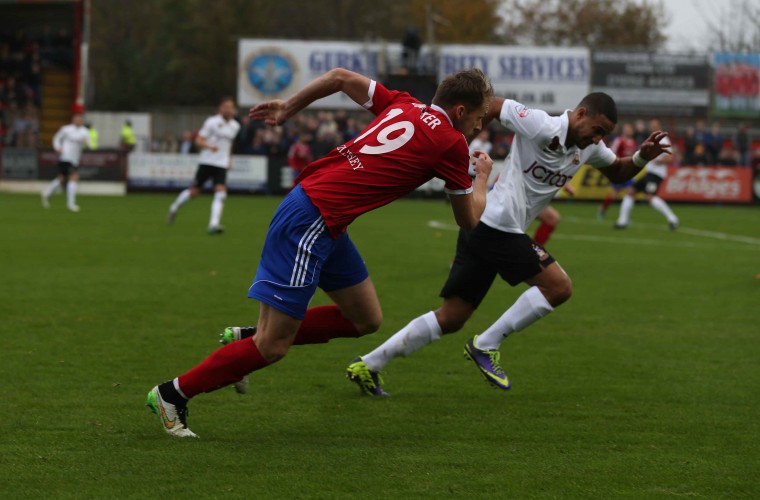 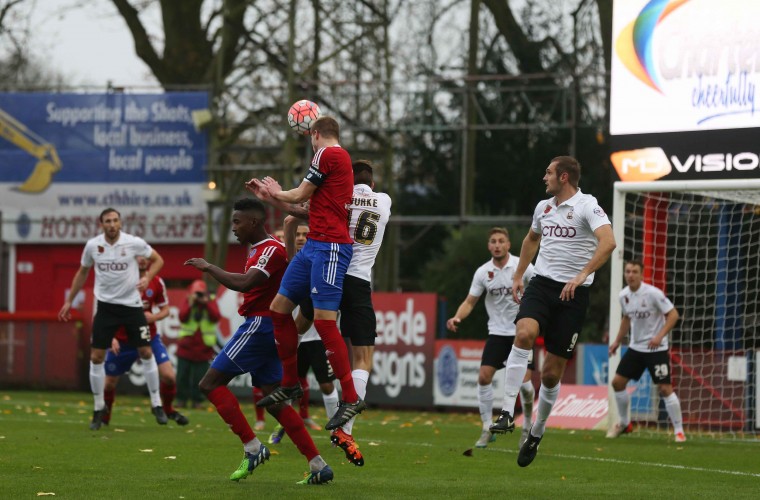 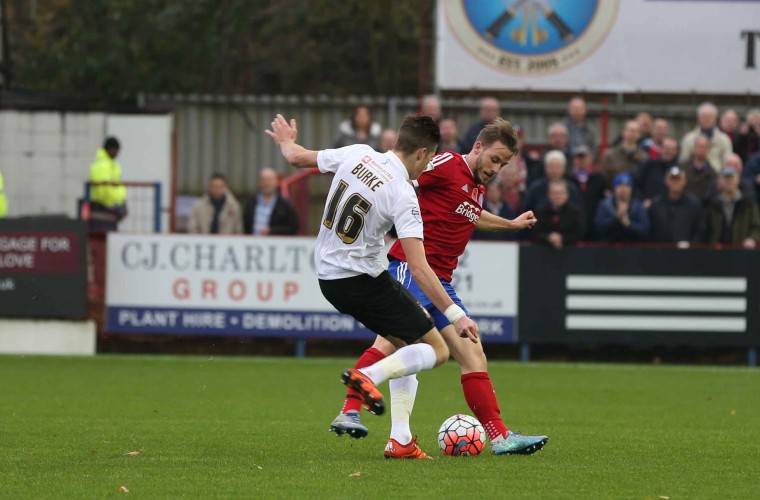 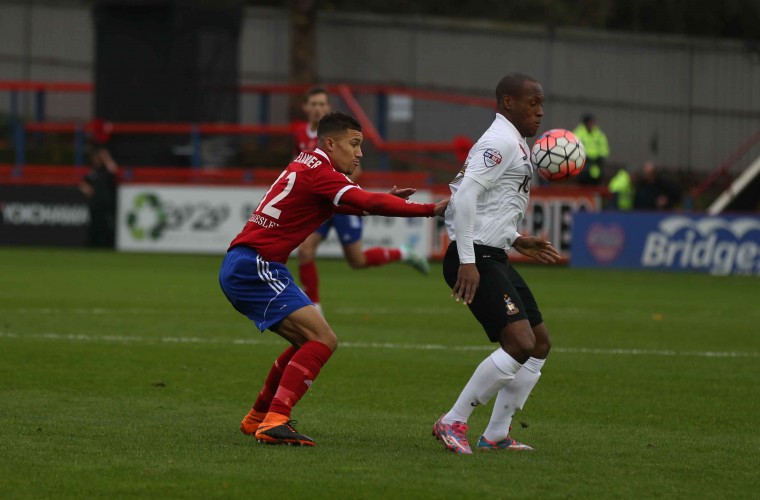 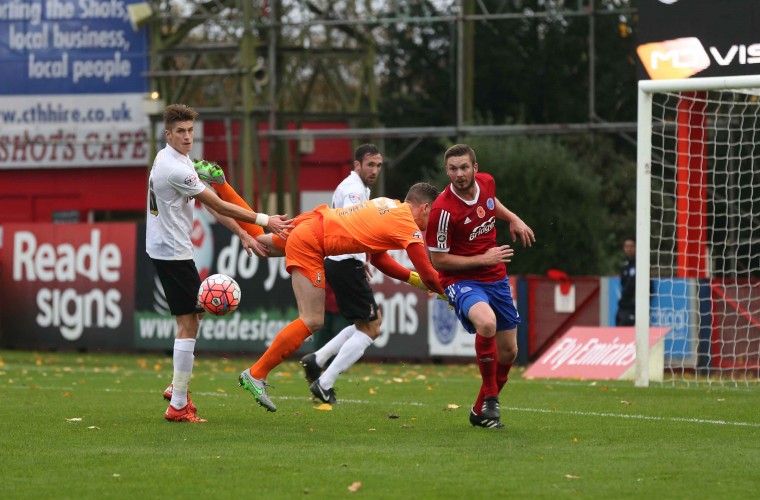 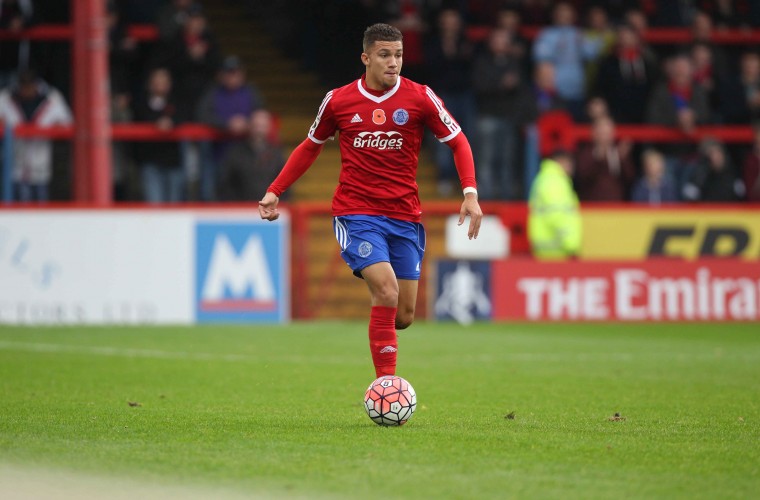 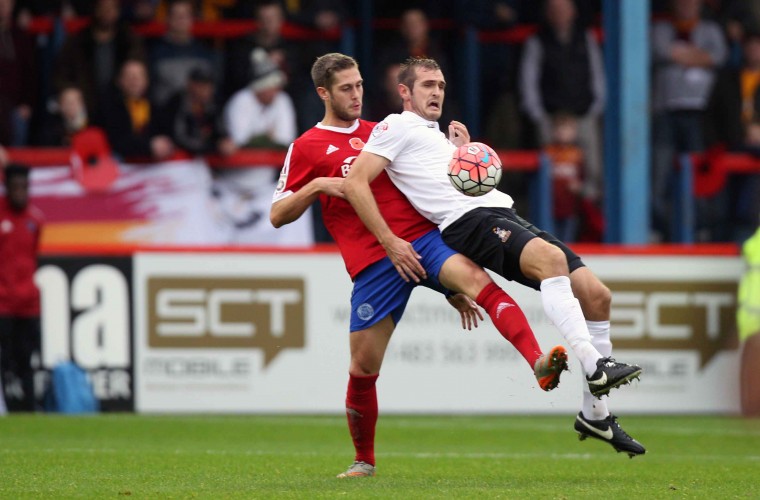 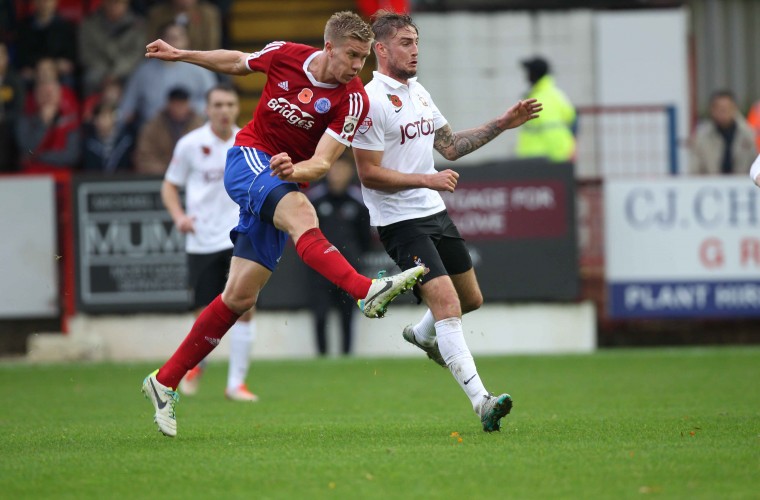 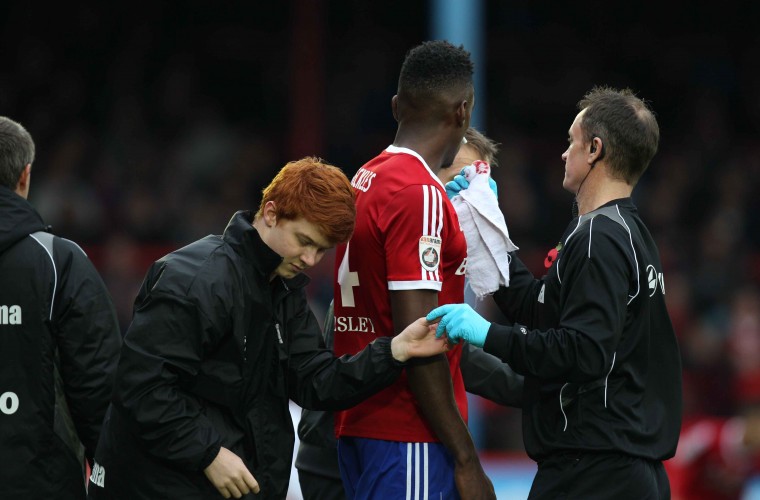 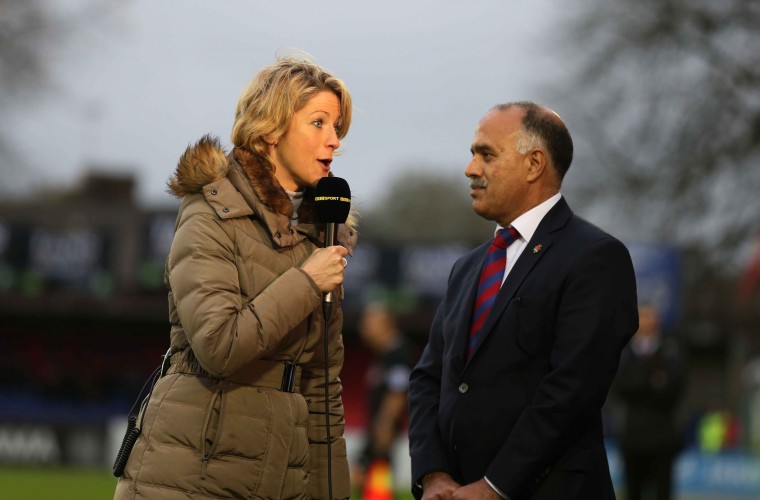 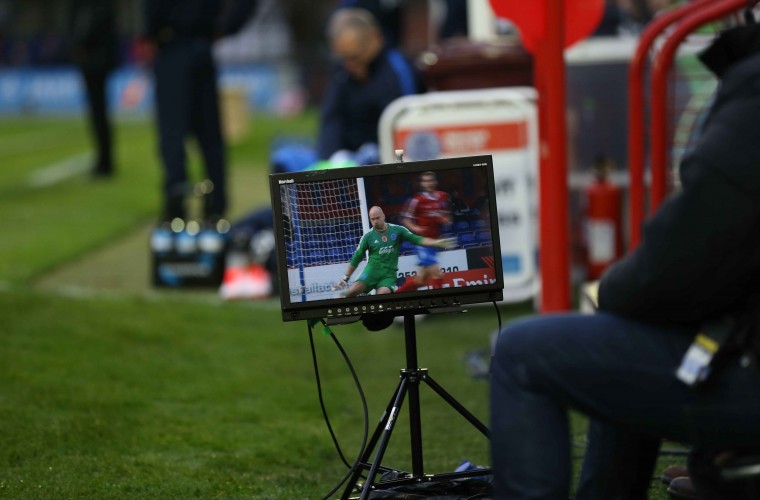 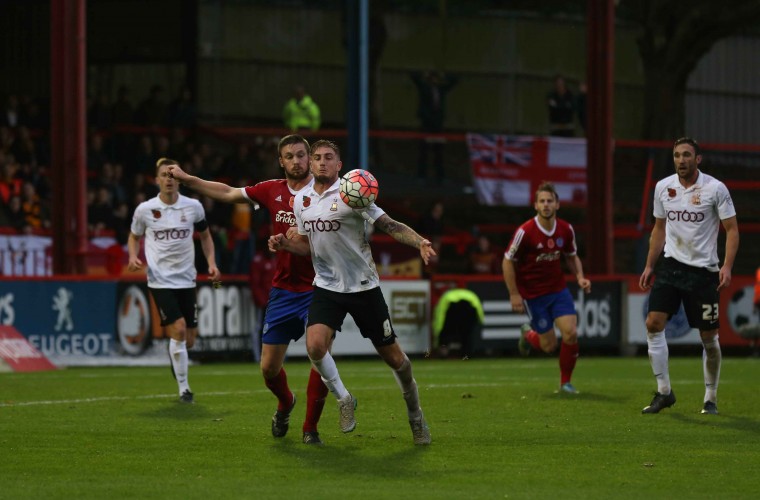 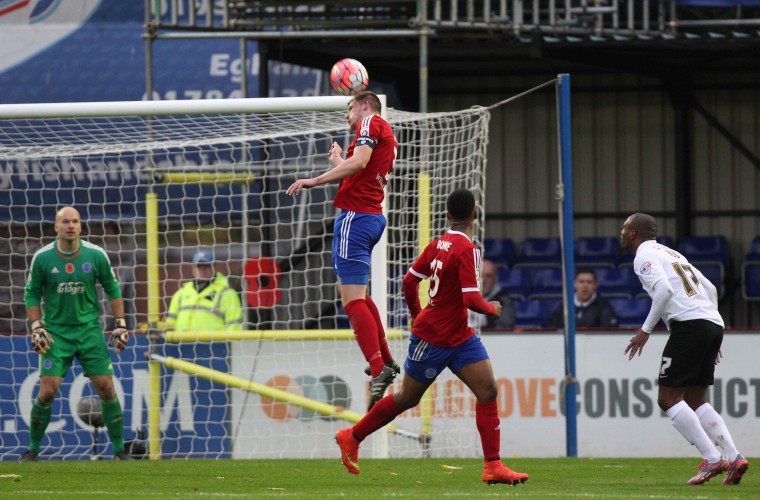 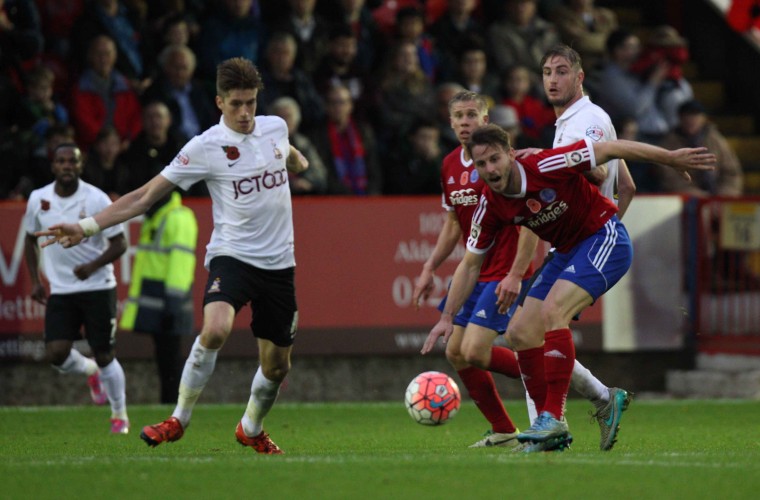 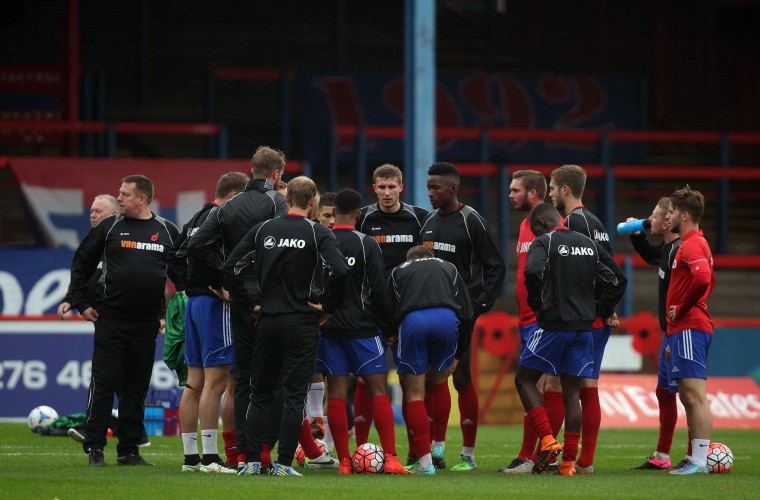 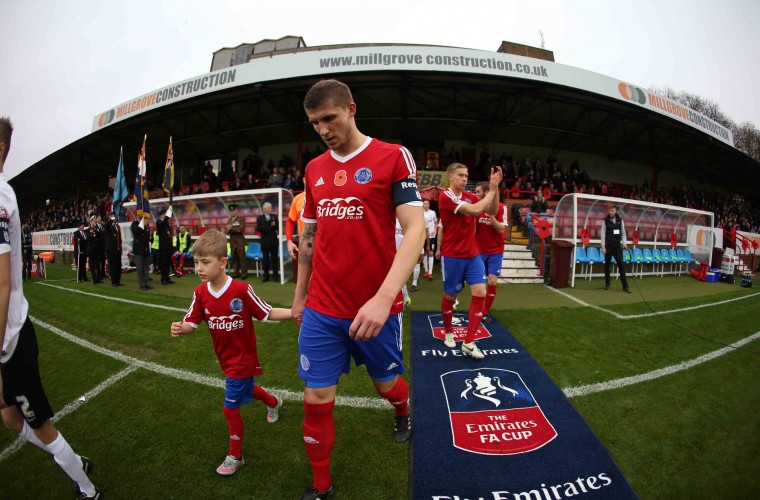 Two minutes of silence were impeccably observed by all in the stadium with respect to Remembrance Sunday. ‘The Last Post’ rang out around the EBB as the standard bearers of the Armed Forces stood with the teams in the centre circle.

Famously, Bradford recently enjoyed cup success earlier this year with a giant killing at Stamford Bridge, and the Shots have pedigree themselves, having only failed to progress to the Second Round once in the last twelve years. With so much at stake, the explosive start at the EBB should have been anticipated.

The Bantams got the match underway, kicking-off towards the East Bank. It was the Shots, however, who started on the front foot, with Dan Walker especially finding huge joy down the right wing, beating left-back James Meredith several times in the early stages to cause a bit of chaos in the Bradford box. Inside the first minute, Charlie Walker found the ball caught under his feet inside of the 18-yard box, and strike partner Brodie also failed to capitalise on sluggish defending early on. Only five minutes into the game, many around the EBB were questioning how the Shots hadn’t managed to find the net against the League 1 opponents.

The Shots were dominant in the opening passages, with good energy both centrally and down the right-hand side. Defending from the front and putting the Bantams under large amounts of pressure. In the 13th minute, Charlie Walker pounced on a hesitant Liddle, skipped past one challenge but was tackled by the last man, Burke. Minutes later Stevenson had a 20-yard drive smartly saved by Williams. Another promising attack.

As time progressed, Bradford began to grow into the game and by the half-hour mark the power of play had balanced out. The defences of both sides looked resolute, however, the Shots were eager to press forward at every opportunity.

The next real opportunity came to Bradford following a free-kick which was put into the Shots’ area and caused a scramble inside of the six-yard box. The ball ricocheted around and eventually fell to Billy Clarke, 20 yards out, who drove the ball goal-bound but for Beckles’ rising header to flick over Smith’s crossbar. In amongst the melee, there were strong appeals for handball, however, Referee Ben Toner was not convinced.

After a single minute of added time, the first half ended; Aldershot Town 0-0 Bradford City.

The second half was a different event altogether, with Bradford looking much stronger and more composed than they had done in the first. The Shots could well have rued missing their early opportunities.

Rather than applying the pressure, the Shots sat deeper and absorbed the Bradford attacks. As opposed to the intent they had shown in the first half, the Shots were now looking to counter-attack and execute a quick break against a Bradford side that were pressing high up the pitch.

Charlie Walker, Rhys Browne and Brodie combined on occasion with success, however the last pass was missing in most cases. The Shots forced multiple corners, but for the majority, Ben Williams was unchallenged in the Bradford goal.

At the other end, Saville and Beckles were called upon numerous times to deal with crosses from both flanks, and as the game surpassed the hour mark, the Bantams were looking the more likely to find a winner. The Shots fell deeper and continued to absorb pressure, and Bradford experienced similar problems with their quality in the final third. The last pass was never good enough to carve open the Shots’ defence on the ground, and the back-line was superb in the air, winning everything that the Bantams’ route one tactics were throwing at them.

The closest chance for Bradford came in the 81st minute, when a corner from the left-hand side was powered high over Smith’s crossbar by McArdle, aside from that there wasn’t much of a threat from either side as the match moved into the latter stages, however, the pressure was mounting on the Shots’ goal.

In the end, the Shots survived three minutes of additional time to earn an extremely creditable draw and a replay in 10 days time at Valley Pride.