We’d like to a say a big congratulations to our training kit sponsorship raffle winners the Weekday Volunteers!

The prize was to get their name on our training kit which would be seen by thousands of people every week with images and behind the scene training videos.

The Weekday Volunteers had this to say as a joint statement:

“The Weekday Volunteers entered the training kit raffle as another way to support the club.

“We were delighted to win but had to quickly decide how best to use the publicity.

“We all agreed that it would be a good idea to offer it to a local charity – so we set about identifying one.

“We were delighted when Disability Initiative accepted the offer and we hope they both enjoy, and make good use of, the publicity.”

Chief Executive of the Disability Initiative Lucy Brown also spoke on the decision of the Midweek Volunteers, she said:

“Everyone at Disability Initiative, (DI), was over the moon to learn that ATFC Weekday Volunteers had chosen our Charity for sponsorship.

“It uplifted everybody’s sprits after a very difficult year and we’re really looking forward to seeing the Team train in their training kit, sporting the DI logo.

“Thank you very so much.

“Come on you SHOTS!”

They were one of 25 people/businesses who entered the raffle, purchasing a £200 ticket (sometimes multiple which helped the club tremendously.

We’d like to thank every sponsor who chose to enter this competition. Everyone listed below is now part of our interview board background for our pre-match interviews.

Again we would like to say a massive thank you to everyone who was part of the raffle as it raised over £6,500 for the football club! 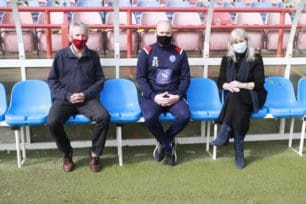