Each game this season The Shots match-day programme has been taking a trip down the time tunnel of Aldershot Town memories, looking at three different years and three different matches played in the weeks corresponding to the home fixture of the day.

Currently we don’t have any fixtures but the Time Tunnel carries on, matching up to the previously scheduled games.

However, with this weekend having been scheduled to be the 12th annual Tour of Duty, this Time Tunnel looks back at three of those memorable games, going back three years, five years and 10 years to 2017, 2015 and 2010. 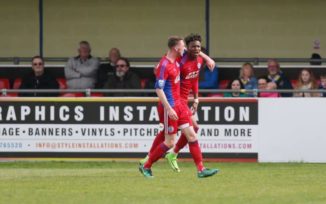 Gary Waddock’s first season back at Aldershot Town continued to go from strength to strength as he, assistant James Rowe and a team only assembled nine months previously, maintained their push on the play-off places and the dream of a second return back to the Football League under the man known variously as ‘Ginger Mourinho’ and the ‘Wadfather.’

The Shots were in fifth place coming into this match, the final play-off position, but they were on a fine run of form. The previous three games had all ended in victory and Waddock’s men had only experienced defeat once since 26 December, a 1-0 defeat away to Guiseley three weeks previously. There was the added bonus of this match having been selected for the annual Tour of Duty, the ninth of these events since the idea had been conceived by Tony Roberts in 2009, and it was an indicator of just how Waddock had revived the spirits of Aldershot Town supporters that the largest-ever amount of Tour of Duty supporters had made the trip to the east Midlands… And what a game they were treated to!

The opening minutes were slightly cagey but it didn’t take long for the Shots to get into their stride. Shamir Fenelon had two early chances; a misdirected header from a Bernard Mensah cross and a shot saved in the tenth minute after good work from Kundai Benyu and Scott Rendell and thereafter, Aldershot Town warmed to their task.

Indeed, it was Ipswich loanee Benyu who was to be the star of this perfect day out for everyone connected with the red and blue. Following a single chance from Moors, an Andy Graham header across goal, and a third opportunity for the Shots, this time from a Jake Gallagher header, ‘Benny’ put the Shots ahead in the 28th minute. Anthony Straker had moved forward and his lay-off to the young winger saw Benyu hit the perfect 22-yard strike inside the left-hand post.

The remainder of the half saw chances for Fenelon, Rendell and Nick Arnold and the start of the second half saw the Shots continue in the same vein. Jake Cole had to block a header on the hour but the resulting breakaway saw Benyu double both his match and season goal tally, beating Danny Lewis at his

near post and the Shots were well in control. The levels of excitement from the away supporters continued to build throughout the remaining half hour, with a disallowed goal from Fenelon and late chances for Matt McClure and Manny Oyeleke, and the delight at the end of the match was palpable, as supporters and players celebrated together. A win, two goals, clean sheet and a tighter grip on fifth place, what a Tour of Duty it had been… 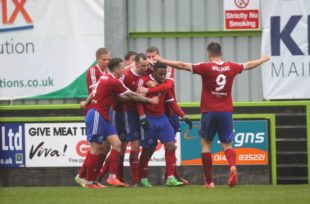 Caretaker boss Chris Barker came into this Good Friday, BT televised, Tour of Duty match with three wins, three draws and three losses under his belt as the Shots sought to cement their position in the National League. Two of those losses had been in the previous two matches but after a break of 13 days without a game, Chris, Matt Gray and the players were ready for this tussle in the West Country. It was probably an indicator of how the season had been that the travelling T of D numbers were somewhat reduced from previous years, but those who had made the trip were to see a game they would never forget!

However, after just nine minutes, it looked as though the game would pan out very differently. Promotion-chasing Rovers roared into the lead with an Elliott Frear goal so offside, it could have been scored in a neighbouring postcode! Undaunted, the Shots layered on the pressure and leading goalscorer Brett Williams had a shot cleared off the line, along with sparkling midfielder Damon Lathrope seeing his 30-yard effort saved by Steve Arnold’s fingertips. The Shots were certainly still well in the game with just the one goal to pull back.

Continuing to do the same in the opening quarter of an hour of the second period, the following nine minutes after that were just manic – and magical – for the red and blue persuasion. In the 61st minute, Williams flicked the ball up and volleyed into the net after Arnold had dived off his line. Parity! Then just three minutes later Lathrope started a move down the right which saw Andre McCollin cross into the centre of the box. The ball deflected off David Pipe’s heel and Tristan Plummer sidefooted the ball home to put the Shots in the lead. And then, putting the gloss on the whole match, Lathrope’s inswinging free-kick allowed Jordan Roberts to make it 3:1, with a header from just four yards out.

The travelling fans, in front of whom all three goals were scored, were delirious, and they were to end the game in this state, as their team proceeded to see the match out in grand style. Just one more win was needed now to keep Aldershot Town in the National League – and five games to do it. As the supporters travelled home back down the M4, they were sure that their caretaker player/manager would be able to finish the job for them… 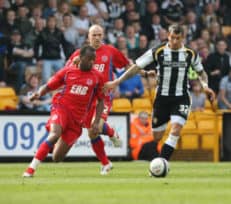 Having been such a popular idea the previous season, the Tour of Duty entered its second year of life with a trip to promotion-chasing Port Vale. Aldershot Town, under the management of Kevin Dillon, were also in pursuit of the higher echelons of the table, looking to make it into the play-offs, having won four and drawn one of the last five games and a good many supporters had travelled to the land of the Potteries, eager to see their team carry on this fine run.

Despite Dave Winfield heading over the bar early on in the game for the Shots, he was needed far more at the other end of the field as his team looked the weather the early storm of pressure Port Vale were applying. Marc Richards, twice, and Lewis Haldane had shots that caused some frantic defending in the penalty box and when Haldane was then fouled by Anthony Straker, there was an outcry from the home support for Dean Whitestone to produce a red card – he did not, and Shots fans were able to breathe again.

There was nothing to separate the two sides after the first half and battle recommenced in the second 45 minutes, the Shots now kicking towards their own supporters. It certainly seemed to provide a lift as well. From a blocked Dean Morgan shot, Ben Harding fired over the bar and Scott Donnelly, along with 583 travelling supporters, felt he had a good case for a penalty. And with this steady pressure, the deadlock was finally broken in the Shots’ favour, Dean Morgan receiving the ball from Marlon Jackson and then shooting from eight yards out, to the delight of the majority behind the goal!

This was the sign for Vale to begin to press for the equaliser, and ten minutes later it came, through substitute Sean Rigg. It could have been seen as a blow to the Shots but they continued to see out the game diligently and intelligently – if not a winning goal then at the very least, Vale were not going to get one either. The final minutes were marred by an injury to talismanic full back Ben Herd, who left the ground rather worryingly in an ambulance, but his team mates did him proud, retaining that all-important point for a memorable draw.

It had been a fantastic day out in Burslem for the Aldershot Town faithful and as they travelled home, some at least were beginning to dream of a play-off place at the end of the month – just how fantastic would that be..?