The season has now officially been brought to an end but the Time Tunnel carries on, with today being the final TT of the campaign. As football rarely reaches this deep into May for the lower leagues, we have just one match as the Time Tunnel travels back 16 years to 2004, and a momentous and dramatic game for Aldershot Town.

Aldershot Town’s first season in the Conference had come to a conclusion that probably no one had
seen when the season had kicked off nine months earlier. After finishing fifth in the table, in the last
available play-off place, the Shots were now about to play in what was only the second-ever play-off final
in the top flight of non-league football for a place back in the Football League. It was a dream come true
– or almost. There was the small matter of defeating Shrewsbury Town first, a club which had been
relegated into the Conference twelve months earlier and under manager Jimmy Quinn, was looking for
an immediate return to League Two.

Results between the two clubs over the season had favoured the Shots, a home draw the previous
September, skipper Anthony Charles scoring and a win at Gay Meadow for Terry Brown’s men in March
with hotshots Jon Challinor and Rosco D’Sane on target. But this was another matter entirely, more like
a cup match than a league game, with just a 90-minute opportunity to change the fortunes of one club.

From early on in the morning of 16 May a steady stream of vehicles left Aldershot for Stoke and The
Britannia Stadium, the venue for this key game as Wembley was in the process of being rebuilt –
coaches, cars, minibuses; Shots supporters were determined in their efforts to watch their team play this
match although it was also ‘live on Sky’ and with a 1pm kick-off there was a need to mobilise early.

All in all, there were probably around 7,500 Aldershot Town fans and although outnumbered by the Shrews contingent, a town considerably closer to Stoke in distance than Aldershot, the Shots supporters were never out-shouted, their fervent support lasting throughout the whole two-and-a-half hour event.

Never were the fans of the red and blue as proud as they were when their players walked out onto the
sunlit pitch just before 1pm and prepared to give their all to take the name of Aldershot Town back to
where so many believed that it rightly belonged, the Football League. Boss Brown had elected to start
with youngster Aaron McClean upfront ahead of regular starter Tim Sills and it was a bold move which
looked to have paid off ten minutes before half-time. Aldershot Town were awarded a free-kick on the left
side of the park and Adam Miller floated in a tempting ball which was met by captain Ray Warburton,
headed back into the centre of the box and pounced on by McClean who eluded the entire Shrews
defence to slam the ball home! At the opposite end of the stadium 7,500 Aldershot Town fans exploded
into wild joy as the Shots players surrounded McClean to celebrate with the 20-year-old. 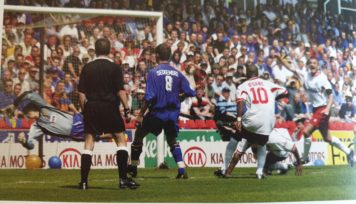 The lead was not held for long though and the Shots were to go in at half-time with the scores level. It appeared that this was a match which would be influenced by dead ball situations and in the 43rd minute it was the Aldershot Town fans turn to see a goal scored in front of them. Shrewsbury took three corners in succession as the Shots failed to clear the ball and it was three times lucky for the Shrews, Duane Derby knocking home the equaliser after the ball was headed on by Dave Ridler.

There were no further goals in the second half although Rosco D’Sane had a sharp shot stopped by
Scott Howie and Nikki Bull kept out Jamie Tolley – and rather more alarmingly, a sliced back clearance
from Warburton! As the game wore on into mid-afternoon the tension levels rose all around the ground –
neither set of supporters could feel entirely confident and normal time was running out. Substitutions
were made – Tim Sills came on for a slightly flagging McClean, Lee Charles for D’Sane and to the
delight of the Shots supporters who thought they would not be seeing him again, Dean Hooper arrived
on the pitch in the 66th minute in place of Simon Downer.

None of this made any difference to the scores and almost inevitably, the match went into extra-time.
The tension ratcheted up even further as 20,000 people almost collectively held their breath and watched
the clock tick down. With a pair of fresh legs under him, it was sub Lee Charles who had the best
chances for Aldershot Town, one in each mini half. Twice over 7,500 mouths opened to cheer a goal and twice over all that came out was a collective shout/groan as ‘Chippy’ failed to net the first opportunity and
Howie saved the second.

And it was Howie who was to ultimately become the hero of the afternoon as Hampshire referee Keith
Stroud led the two teams into penalties which were to be taken in front of the Shrewsbury supporters.
Aldershot hearts soared as Luke Rodgers blasted his and the Shrews’ first high over the stand behind
the goal- was this finally the end of 12 years in non-league football? – but after that it was all Howie.
Perceived afterwards by Aldershot supporters to have been coming slightly off his line each time, but
never prevented from doing so, he proceeded to save spot-kicks from Tim Sills, Chris Giles and Jamie
Gosling while Bull was unable to do anything with the same from Jamie Tolley, Jake Sedgemoor and
Trevor Challis. A roar of celebration came from the far end of the ground as Challis netted his penalty
and Quinn’s men were triumphant – winners of the Conference play-offs and that precious promotion slot
back to the Football League.

Shots hearts were broken. So near and yet, so very far. The 14 men of the match day squad went up to
receive their losers’ medals, most of them promptly removing them afterwards, and then watched as
Darren Tinson lifted the play-off trophy – it was a painful moment. Not one Shots player either, forgot to
applaud their supporters, many of whom remained to clap them off the pitch.

The same supporters then slowly walked back to their cars, coaches and minibuses, reflecting on what
could have been but also with a warm feeling of pride in their hearts. Their players had come so far –
and as a part-time squad too. If they could achieve all this in their first Conference season who knew
what could happen in subsequent years. It was time now for everyone to take a break and rest up from
the football stresses and strains. Next season would come around soon enough and with any luck, it
would be just as exciting as this one – or hopefully, even go one stage better…