The season has now officially been brought to an end but the Time Tunnel carries on. Today it’s a Play-Off special and we travel back to 2018, 2005 and 2004 as the time tunnel takes us back two, 15 and 16 years into Shots’ history and three matches played on or near 2 May. 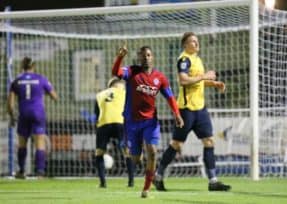 For the second consecutive season Aldershot Town, under boss Gary Waddock, had reached the
National League play-offs. The run-in had not been the best, with only three wins in the previous eight
weeks but fifth place had been achieved. The format for play-offs had been changed in this season, allowing six teams to qualify. Finishing fifth meant that the Shots had home advantage for their quarter-
final match against Ebbsfleet United but with the eventual prize being promotion to the Football League, their visitors were not going to give way easily and the match was to be over two hours of toe-to-toe
attrition.

At the end of both periods of normal time, the score was 0:0. The first half saw Aldershot Town dominate
for long spells although both Luke Coulson and Corey Whitely had early half chances for the visitors.
Nathan Ashmore saved well from Nicke Kabamba, denied Matt McClure, Jake Gallagher saw his two
drives go wide and Scott Rendell headed over the bar, all before the first half whistle went and there was
even time for on-loan keeper Lewis Ward to save from future Shots loanee, Jack Powell.

And it was Ward who was to be the hero just minutes into the second half. Powell’s through ball to
Danny Kedwell saw the striker allegedly fouled from a challenge by Shots skipper Callum Reynolds.
Picking himself up, Kedwell took the penalty, but to the delight of the packed stadium, his shot was
saved by Ward’s legs! This might have given the Shots more impetus and both McClure and substitute
Jim Kellermann had shots but then disaster struck for the young Aldershot midfielder.

A collision with Fleet’s Dean Rance seeing him down in pain and then leaving the field with a dislocated shoulder. The delay caused by the injury added 10 minutes of time to the match but at the end matters were still all-square, despite fine efforts at both ends, one by Frenchman Fabien Robert and former Shot Dave Winfield, for Ebbsfleet. The players readied themselves for a further half-hour, rallied by their respective managers, Waddock and Daryl McMahon, and play recommenced once more.
It was the second 15 minute period that was to provide all the drama.

In the 106th minute Kabamba headed in a beautiful cross from Cheye Alexander and the EBB stadium rocked with joy – the former Pompey man had only scored twice previously since arriving in January but this one looked like it couldbe priceless. Then the tension levels steadily rose around the ground; could the Shots hold on? Could Ebbsfleet claw themselves back into the game? Aldershot Town crept closer and closer to a trip three days hence to Birkenhead when with a minute to go, the curse of the former player struck – Ashmore’s launched free-kick met Rance whose lofted ball to Dave Winfield’s head saw the formerly-popular Shots defender send 483 travelling fans mad with joy.

And so to penalties, taken at the best end for Aldershot Town, the East Bank, the fans endeavouring to
alternately create a toxic then positive atmosphere, depending on which goalkeeper was between the
posts. The Shots went 3:1 up as future wearers of the red and blue, Powell and Marvin McCoy had their
kicks saved and Reynolds, Scott Rendell and James Rowe powered theirs home. Then, with chances for
both Lewis Kinsella and Fabien Robert to win it for the Shots and spurned, Ward turned penalty taker in
the sudden death, hit the post and Aldershot hearts were broken as that man Rance impacted on the
game for the third and most painful time, firing home the winning penalty.

The dream was over for a second year and it was a sad collection of players, supporters and
management who left the ground that evening. Because, for now, all anyone connected to Aldershot
Town wanted to do was go home and lick their respective footballing wounds…

A second season in the Nationwide Conference had seen Terry Brown and Aldershot Town compete
well once again and for the second time, reach the play-offs, that tantalising place so near and yet so far
from the Football League. The opponents on this May Bank Holiday were Carlisle United, looking for an
immediate return to the Football League after relegation a year earlier, the first time the Cumbrian club
had been in non-league football for 76 years. Manager Paul Simpson, who had overseen that relegation
was determined to reverse that process and indeed, when he had brought his team down to the
Recreation Ground the previous September the Shots had conceded five goals, with none scored;
everyone hoped that this match would end slightly differently.

In the end Brown’s men were to come out victorious, but only by a single goal. There were ample opportunities for goals in the first half, Will Antwi firing into the arms of Matt Glennon and the season’s leading goalscorer, Tim Sills heading his attempt into Glennon’s grateful arms as well. Hope then surged
through the 6,000-strong crowd just minutes after half-time when Nick Crittenden, who had scored seven
goals from midfield in this his first season with Aldershot Town, gathered the ball on the edge of the box
and fired his shot home with great power, delighting the packed East Bank crowd who were able to enjoy
the best view of this goal.

Celebrations abounded right around the ground, barring a small corner of far travelling United fans, but
unfortunately the Shots seemed unable to take advantage of this lead. And in a match that was only half
of the tie, and the home one to boot, more goals were badly needed if the second leg at Brunton Park
was to be navigated successfully. Glennon in the visitors’ goal seemed inspired though and when it
looked as though Darren Barnard had doubled the lead for the home side, the Carlisle stopper
acrobatically tipped the shot around the post and away for a corner.

In the closing minutes it was the turn of Nikki Bull in the Aldershot Town goal to play his part, making a
superb save, palming Peter Murphy’s close-range attempt to safety and preserving the Shots’ narrow
lead. And that was how it ended, with just the one goal for the home side and Carlisle certainly feeling
that they had done well to keep the score down, even if they hadn’t scored themselves. As the Shots
supporters left the ground though they still held onto the hope that their players could achieve something
in four days’ time, despite the northerners appearing to be rated as the favourites. After all, both sides
had ended on the same amount of points, the Shots had a zero goal difference in away matches and
they did have a lead – if all else failed, they could always take the tie to penalties… 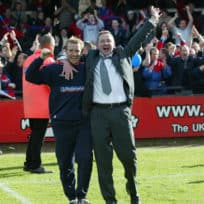 Aldershot Town’s first season in the Conference had reached a point where no supporter might have
even dared dream of nine months earlier, when the campaign had kicked off. Despite finishing 21 points
behind opponents Hereford United, the Shots had snuck into the play-offs on the final day of the season
and after a 1:1 draw in the first leg of this two-match semi-final, hopes were high for Aldershot Town to progress to the play-off final and be just 90 minutes away from the Football League.

However, there was the small matter of 90 minutes to get to the final first, and with the prize being so
great, it wasn’t surprising that this game moved on to extra time and finally penalties, giving everyone’s
hearts and nerves a strenuous workout on the long and sunny Bank Holiday Monday.
The last time an Aldershot side had been in a play-off situation had been 1987, facing Wolverhampton Wanderers to gain promotion to what was then Division 3.

The Shots had been victorious in the two- legged final and in a link reaching down the years, the defeated manager had been Graham Turner, now boss at Edgar Street. He probably hadn’t been too happy 17 years previously when his much-fancied Wolves had been overcome by little Aldershot and it was fair to say he was less than happy now as well, when Andy Tretton was sent off in the 20th minute for what referee Andy Woolmer deemed a professional foul on Aaron McClean. It meant that Brown’s Aldershot side had a man advantage for the remainder of the game, although the Bulls had chances through both Danny Williams and Steve Guinan in the first half which were wasted. Matt Baker, between the sticks for the home side also saved well from Chris Giles, Rosco D’Sane and Tim Sills in the second half but it was the Shots who nearly settled matters in normal time when D’Sane squandered a fine chance and Aldershot’s opportunity to finally take advantage of number of players on the pitch.

And so to extra time, although that was to provide no resolution either, and as the time ticked by, on the
supporters began to prepare themselves mentally for the rigours of penalties – neither team being
prepared to give an inch – and so it came to pass, at around 5.30pm as the evening began to draw in,
the managers gathered the players around them and rallied them for one final effort.

Nikki Bull, who was finishing his second season with the Shots and rapidly becoming a hero amongst the
supporters, now deepened that status even further, saving the Bulls’ first two penalties to the gathering
excitement from the Shots supporters, although D’Sane missing his in between was not ideal. However,
Jamie Gosling, Giles and Sills then hammered their kicks home followed by a second Hereford failure and with the score 3:2, Hereford all out of shots and just Will Antwi left to step up, the utility player kept
his nerve to rifle the ball home, sending the travelling fans wild with joy and Terry Brown sprinting down
the pitch to celebrate with them!

It was a fantastic day in Aldershot Town’s short history – reaching their first play-off final and one which
gave the opportunity to return to the Promised Land – the Football League. All they had to do 13 days
hence was travel to Stoke and beat Shrewsbury Town – and on the high of this perfect afternoon in
Herefordshire, anything seemed possible…