Each game this season The Shots match day programme has been taking a trip down the time tunnel of Aldershot Town memories, looking at three different years and three different matches played in the weeks corresponding to the home fixture of the day. Currently we don’t have any fixtures but the Time Tunnel carries on, matching up to the previously scheduled games. In line with what would have been the Aldershot Town V Solihull Moors fixture, we travel back to 2014, 2008 and 2002 as the time tunnel takes us back six, 12 and 18 years into Shots’ history and three matches played on or near 4 April. 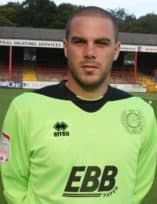 Lying in 21st place, a position that Aldershot Town had occupied since the middle of February, and still
very much relegation-threatened, the Shots came into this game on the back of a tight 1:0 home win over
already doomed Hyde United the previous weekend. Luton Town were flying high at the top of the
National League table, looking to finally make their return to the Football League, and there seemed very
little chance of the Shots being able to claim a victory against John Still’s men, who were 13 points clear
and needing only two more victories to secure promotion as Champions.

However, points were very much needed for Andy Scott and his players and backed by a determined
and vociferous group of travelling supporters, they set out to frustrate the biggest Kenilworth home crowd
of the season. And for so long, it seemed to work, despite the Hatters having more possession, shots on
and off target – and fouls as well! Glenn Morris made an heroic save in the first half from Andre Gray
after he picked the ball up from a Ronnie Henry cross but neither side could make the breakthrough in
the first half. The second half continued in much the same way and the closer that precious away point
came, the more intense the pressure of expectation was felt in the away end.

But then, with just five minutes remaining, Luton showed why they were running away with the division
as they finally broke Shots’ resolve and hearts. Morris blocked a flick from Gray but was unable to reach
loanee Cameron McGeehan’s header, set up by a Jake Howells cross, and the hosts were ahead.
The Shots threw all they could at the home side for those final few minutes but they stood firm and when
a chance did come, Hatters keeper Mark Tyler saved well to keep his side ahead.

It was a huge disappointment for the travelling fans, who had to depart the ground through jubilant home support. Five games remaining and three wins required. Could the Shots stay up? At the moment, despite this strong performance against the table-toppers, it was looking very much in the balance… 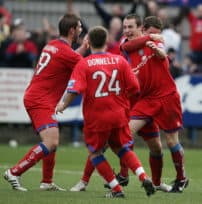 Hylton celebrates the winner in the 82 minute

With Aldershot Town’s 16-year dream of returning to the Football League becoming so close the
supporters could almost touch it, the visit of Salisbury City to the Recreation Ground saw over 3,000
home fans crowding into the ground along with just short of 300 visiting fans, keen to see if their team
could overcome the table-topping Shots and continue their own run of just one defeat in 17 matches.

It was though the home side who were to come away with the three points and the knowledge of another
step taken along that yellow brick road to Aldershot Town dreams, the match bookended with one early
and one late home goal. After just four minutes, Rob Elvins brought down a deep delivery from Anthony
Straker and fired home from 12 yards out and the already pumped-up crowd threw itself collectively and
even more deeply behind their team.

Kirk Hudson was unlucky to see one shot saved by visiting stopper Ryan Clark and another cannon off the post when it might have been easier to score but Salisbury were also well in the fight and Matt Tubbs’ overhead kick left Nikki Bull stationary on the goal line, the ball thankfully for everyone of a red and blue persuasion, edging past the post.

The second half saw more chances for Aldershot Town, as they sought to open up former FA Cup
winner Nick Holmes’ team; Hudson saw an opportunity hit the side netting and Louis Soares hit wide
after being set up by the hard-working Hudson. And it looked as though these missed chances might be
regretted when just after the hour, the Whites came back into the match, Darrell Clarke’s initial effort
being bundled away by Bull, only to be tucked away by Liam Feeney on the rebound.

The Shots were beginning to look tired – they had played 120 minutes plus penalties just two days
earlier, winning the Setanta Shield, but they were also players who these days didn’t know how to lose
and with Tubbs shooting both wide and then over the bar, it began to look as though Salisbury might
regret their own misses. As the match entered the final quarter with both sides pushing for the win, the
keepers were both busy.

Elvins and John Grant worked Clarke and Ashley Barnes pressured Bull and it looked like it could be anyone’s game. However, the never-say-die team of Waddock’s players always had something left and today was no exception. There was just eight minutes remaining when Donnelly’s free-kick was met by Anthony Charles and guided to Hylton – his headed (and winning) goal sent the whole stadium into ecstasy and the Shots three points nearer to their goal!

Ten minutes later it was all over and the match won. Fair to say, everyone was running out of
superlatives about this season but this win, just two days after securing silverware, was something very
special. The hope continued to grow ever stronger in the hearts of players, supporters and management
alike…

Terry Brown’s third league game in charge of Aldershot Town yielded his first league win as boss of the
Shots after draws with Heybridge Swifts and Basingstoke Town, an Easter Monday derby. Brown had
also taken charge of a Hampshire Senior Cup semi-final second leg as his debut match (seeing the
Shots through to the final), and more pertinently, a League Cup semi-final second leg against Hampton
and Richmond, a match which had taken place just two days earlier and had gone into extra-time, before
the Shots were knocked out on a 3:2 aggregate score.

As a result of this fixture congestion, the Shots had played 300 minutes of football in the past week and
now were gearing up for a fourth game in eight days. Their opponents had also come through a heavy
week of football and thus it was hardly surprising that the quality, if not the level of determination and
effort, was sometimes not that apparent. Hendon though were on a five-game winning run and keen to
continue this, but in this they were to be disappointed, although they at least reached half-time still in
parity with the Shots. The closest the home side came in that opening 45 minutes was a Stafford Browne
header over the bar, while Gareth Howells in the home goal had very little to do.

Energy levels seemed to revive in the second period, and backed by their ever-vocal home support, the
Shots took the lead in the 58th minute, through Browne, although Hendon were unhappy with the
refereeing decisions in the run-up which left them with a previously injured player waiting to return to the
field of play and a controversial free-kick for the Shots giving what the Greens felt, was an unfair
advantage. No matter, Browne hit low into the goal and the home side were ahead.

The Shots continued to be on top for the next quarter of an hour so it was a bit of a mystery as to how
Hendon then equalised through Dale Binns, perhaps a lapse of defensive concentration. And the game
was definitely not over yet as Hendon came close again, the wind taking the ball away from Howells and
then the referee refusing a penalty to the visitors, despite their protests. And so maybe it was because
they were distracted by all of this perceived unfairness but the majority of the Recreation Ground was
filled with delight as, with five minutes remaining, Adam Parker touched in a long throw, although it
deflected off both visiting goalkeeper and a defender first. It was no more than the Shots deserved and
when the whistle blew minutes later, Terry Brown had his first home and league win.
The fans streamed out of the ground delighted, it was looking although this new manager era could
prove to be quite interesting…