The season has now officially been brought to an end but the Time Tunnel carries on, matching up to the previously scheduled games. In line with what would have been the Aldershot Town v Ebbsfleet United game, we travel back to 2019, 2009 and 1998 as the time tunnel takes us back one, 11 and 22 years into Shots’ history and three matches played on or near 25 April. 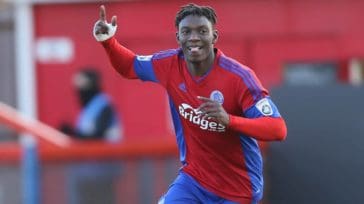 For the final game of an injury-hit and ultimately incredibly disappointing season, Gary Waddock (for the
last time it was to transpire a week later), took his players to Kent for their visit to Maidstone United,
watched by a decidedly subdued sub-2,000 crowd, the Stones ending the season in an even worse
position than their visitors, rock bottom of the table.

The Shots had been relegated just two weeks previously after a 1:1 home draw with Hartlepool United
and were now 10 points adrift of 20th place and safety. There was just one tiny hope still flickering within
the most optimistic and hopeful of hearts. Gateshead FC had been experiencing all sorts of problems off
the field throughout the second half of the season and there was some doubt as to whether they would
be permitted to take part in the National League for the 19/20 campaign.

Should they be removed from the league, then only three teams would be relegated, those in 22nd, 23rd and 24th position. Having been firmly wedged in 22nd place in the table for the past three months, it seemed as though the Shots would not be able to grasp even this wafer-thin opportunity but an Easter Monday win over fellow relegation team Havant and Waterlooville had seen the name of Aldershot Town rise to that elusive place and the season was to end on a win and the securing of fourth-from-bottom in the table.

It was a cold and blustery day, grey skies reflecting the mood of the supporters and the wind making it
difficult for the two teams to play football. There were chances in the first half for both sides, with Jake
Cole reminding the travelling fans of just how good a keeper he was when he tipped a shot from Elliott
Romain around the post and Matt McClure shooting just wide after picking up a long ball from Lewis
Kinsella.

And it was McClure who was to break the deadlock ten minutes into the second half when, in his
signature style, he smashed the ball home past Chris Lewington from 25 yards out. It was a goal that
came from nowhere but appreciated by the visiting supporters nonetheless. It gave the players some
further impetus too and McClure and Rendell were only stopped in their goalward progress by former
Shots loanee, Will De Havilland. But it was another Shots loanee, Bernard Mensah, who was to score
the second and final goal of Aldershot Town’s tenure in the National League, when he too shot from 25
yards out, swerving the ball past Lewington.

There were though no big celebrations at the final whistle, just a lot of downhearted and disappointed
players coming over to applaud an equally downhearted and disappointed set of supporters after what
was only Aldershot Town’s 11th win of the season. It was a dark day for everyone connected with the club.
The Shots might have won the battle but they certainly hadn’t won the war – or could there be better
news in the weeks to come, with 21st place now fully secured? Only time would tell…

Aldershot Town had enjoyed an excellent first season back in the Football League under the
management team of Gary Waddock and Martin Kuhl, although the past three months had seen only
three wins. However, it was enough to see the name of Aldershot Town safely into 15th place in the table, a satisfying end to this most special of seasons.

This final home game of the season saw a 2:2 draw with a Chester City side who needed the win to
stand any chance of staying up. City had had a horrendous season, plummeting to the lower reaches of
League 2 and although this defeat didn’t see them mathematically relegated, they were in all but name, a
2:1 home defeat to Darlington finally finishing the job a week later. Worse was to follow, with debts of
seven million pounds being announced and the club placed into administration, and the shadow of this
hanging over manager Mark Wright and his players can’t have helped on pitch performances.

It might have been hoped that the Shots were not in the mood to be charitable but it did look from very
early on in the game that thoughts were perhaps moving towards the close season and holidays. As
early as the second minute Chester were in front with a penalty from Ryan Lowe, his 16th goal of the
campaign and his final one in a Seals shirt. The Shots were level just before the quarter hour through
Kirk Hudson and the half ended 1:1.

Hudson doubled his and the home side’s lead 10 minutes into the second period, taking his season tally
to 13 and it looked for a while as though it would be the winning goal too. Chester though continued to
scrap and battle as befitted a team in their perilous position and 18-year-old Lloyd Ellans gave his
manager hope when he equalised in the 63rd minute.

Sadly though it was not enough for the visitors and even the substitution of Shots goalkeeper Nikki Bull for Mikhael Jaimez-Ruiz seven minutes later didn’t give the Cheshire team a further chance, and the game ended with them as good as relegated.

The Aldershot Town supporters gave their players a loud round of applause as they left the pitch; it had
been a thoroughly enjoyable first season back in the Football League with some areas of promise; and
who knew, hopefully under Gary Waddock’s leadership the following season could be even more
exciting…

In the penultimate game of a highly-successful season, George Borg took his players to Thame for what
was to be the final game played against the Oxfordshire side after several dramatic encounters between
the two clubs over the years. The previous Saturday had been a joyful time, a 2:0 home win over Staines
seeing Aldershot Town promoted to the Ryman Premier League, a third promotion for the young club in
just six years.

Although a fair amount of Shots supporters had travelled to this game there were many more saving themselves for the celebrations the following week – the promotion party at the Recreation Ground seven days later was to see 4,289 supporters flood through the turnstiles. However, for the fans that did travel there was a treat in store as the visiting side romped past their hosts, the goals coming from Roy Young, hitting his second hat-trick of the season in all competitions and taking his total up to a fine 27 for the season, and Terry Howard.

Centre back Howard had only arrived at the Club from Yeovil five weeks earlier, scoring on his debut in a 1:1 draw away to Barton Rovers before doubling his season total in the red and blue with this goal against Thame. It was a shame then that he wasn’t able to be awarded a title-winners’ medal as he hadn’t played enough games to qualify for one!

Regardless of that, it was an entertaining afternoon out in Oxfordshire for the Shots supporters and they
travelled back home down the M4 afterwards, delighted with the season and already making plans for
the promotion party the following weekend which was to be at home with a match against Berkhamstead
Town. George Borg’s first season in charge couldn’t have gone better and every fan was ready to
celebrate this to the top of their bent. The Shots were on the rise once again…