Currently we don’t have any fixtures but the Time Tunnel carries on, matching up to the previously scheduled games. In line with what would have been the Aldershot Town V Torquay United fixture, we travel back to 2017, 2011 and 1993 as the time tunnel takes us back three, nine and 27 years into Shots’ history and three matches played on or near 11 April. 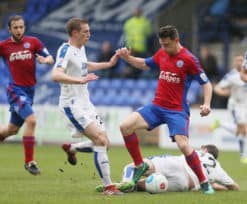 Lying in fifth place and desperate to hold on to that fourth and final play-off position, Gary Waddock took
his Aldershot Town side on a Good Friday trip to The Wirral, looking for the points to keep up the pressure on the teams around them. One of those teams of course was Tranmere themselves, in second place and still with an outside hope of automatic promotion, although the previous Tuesday’s 1:0 home defeat to Forest Green Rovers had dented that ambition somewhat. Waddock’s men were on a roll as regards form, having won four and drawn one of their previous five games, scoring 10 goals in the process. They had reached that wonderful position of almost being unable to lose – manager Waddock and assistant James Rowe were able to keep expectations realistic though and this match was approached with the usual professionalism.

Live on BT Sport as the lunchtime game, the match started fast and proceeded with breakneck speed
to half-time, both sides eager for the points, and it was the visitors who showed first. After just three
minutes a ball over the top of the Tranmere defence from Jim Kellermann saw Matt McClure run free,
outpacing the entire Tranmere defence and slot home past Scott Davies, right in front of the home

supporters. Moments later and Davies was happy to be able to scramble away a Kundai Benyu free-kick.
It was then the turn of Shots stopper, Jake Cole, to punch away from James Norwood but he was
unlucky to see the ball drop to Cole Stockton who hit the equaliser in front of the near 300-strong away
supporter contingent.

Worse was the come for those fans too, when Cole, who was rarely beaten in such situations, lost a one-
on-one battle with Connor Jennings and the match was flipped on its head, the Whites now in control with Jennings taking his season tally to six goals. But the Shots were not done yet – there was over an hour left of the game and both Benyu and Bernard Mensah continued to apply pressure. This endeavour
reached fulfilment minutes before half-time; McClure, who was having a fine game, flicked the ball from his head towards Mensah. Controlling the ball first with his knee, the Shots number 11 hit a stunning shot
from just inside the box, putting his team right back into the game and sending a chorus of boos ringing around Prenton Park, save for a small red and blue group at the opposite end of the ground!

The second half was no less exciting but failed to yield any more goals, despite the Shots demonstrating
fine ball retention. Davies helped to keep the hosts in the match with a save from Jake Gallagher and
late on, Manny Oyeleke, on as a sub for the booked Kellermann, hit just wide of the post! The final move
of the game almost saw Shots’ hearts broken as Tranmere pushed for a late, late winner, but captain
Callum Reynolds was well-placed to make a crucial block a second before the final whistle, thus securing
Waddock’s men a fine draw. The Shots supporters were delighted, a point away from home against a
high-flying team and fellow play-off rivals Dover to play in three days’ time – what an exciting Easter
weekend this was turning out to be… 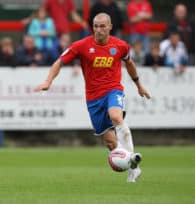 With Aldershot Town’s third season in the Football League drawing to a quiet close, under Dean
Holdsworth’s management, the alarms and excursions of December and January, when there had been
real fear that the Shots would be relegated, seemed far away. The club was lying in 12th place in the table, with a run of four wins and four draws behind them – indeed, they hadn’t lost a game since a 2:1
home defeat to Port Vale at the end of February, and the new manager was coming in for some praise.
Today’s opponents would be a challenge though. Shrewsbury Town were pushing for a play-off spot, up
in fourth place, and would be keen for points and goals. As it was, Graham Turner’s team were to get
neither and the result turned out to be a glorious one for the home supporters, who were gathered in the
warm spring sunshine.
Kicking towards the East Bank for the first half, the supporters assembled there were treated to two
excellent home goals in the first half hour. Firstly Danny Hylton, whose Shots career was enjoying a revival under the new boss, twisting and turning on the edge of the box to lose his markers, hit a fine left-
footed shot diagonally across the box, beating everyone including Ben Smith in the Shrews’ goal. And

then, rather more surprisingly but no less dramatic for that, Aldershot Town number 2 Ben Herd found
himself front and central to the goal with a lay-off from Damian Spencer and fired the ball home from two
yards outside the penalty box. And if the ball may have taken a couple of deflections on its 20-yard
journey to the goal, nobody was going to deny the Shots defender his moment of glory against his former
club and he celebrated in style. It was to be his only ever goal for the red and blue.

Unsurprisingly, Shrewsbury looked to keep the score down in order to make a comeback into the game
while also trying to find the goals they needed to achieve this. However, neither side seemed able to find
the net for large swathes of the second half and this was to ultimately benefit the Shots when, with 13
minutes to go, a mazy Jermaine McGlashan run ended with him being fouled just inside the penalty box
and the resulting Danny Hylton penalty sent a frustrated Smith the wrong way for Aldershot’s third goal
and confirmation of the three points.

The final minutes closed out to loud singing from the Shots supporters who were delighted with this
result. Hopefully the signs were already in place for an even better season to come with perhaps another
journey to the play-offs – or better! Hopes were certainly high after this result…

Two weeks after securing the first-ever promotion for Aldershot Town Football Club, the largest league
crowd so far in that famous inaugural season turned out to see the Shots secure their first League title,
with a 2:1 win over Thame United. The Oxfordshire side had been tucked in behind Steve Wignall’s men
for the majority of the campaign and indeed had been one of the few sides in this memorable campaign
to take a point from the Shots – a 2:2 draw back in the previous November when Dave Osgood and
Brian Lucas had clawed back a 2:0 deficit with only minutes left on the clock.

This time the result was slightly less dramatic although the tight scoreline showed the hosts were up
against a club who also had their own promotion ambitions. The Shots hadn’t lost in the league though
since the second day of the year and this result was probably never in doubt.

Unsurprisingly, the opening goal came from Mark Butler, his 28th of the season in all competitions. The
winning goal came from a man who was only to play nine matches for the Shots, having only arrived
from Bracknell Town at the end of February.

Brian Broome was a former Aldershot FC apprentice and this was his sixth game and second goal for his new club – to be fair, he would probably never score another more significant one, at least in the eyes of the supporters watching this historic match, and this led to delighted scenes at the end of the game as supporters, management, players and directors all celebrated this excellent achievement which came just 13 months after the demise of Aldershot FC.

The fans filed out of the ground, knowing that the next (and final) home game of the season would see
even greater celebrations when the Diadora League Divison Three Championship trophy would be
presented to their triumphant players. What an afternoon that was going to be for everyone connected
with this brave little club…