Aldershot Town have signed two trialists on non-contract deals ahead of the start of the Vanarama Conference season this Saturday.

Goalkeeper Dan Thomas and striker Tom Derry arrive after impressing Andy Scott in pre-season. Derry scored the late equaliser which earned The Shots a draw at Sutton United, whilst Thomas has featured against Staines Town and Sutton United. 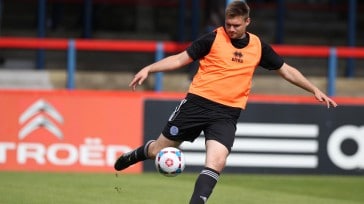 22 year-old Thomas is a graduate of the AFC Bournemouth youth academy, and made four first-team appearances for The Cherries as well as enjoying loan spells at Dorchester Town, Welling United and AFC Totton, before being released in the summer of 2012. From there he joined Havant and Waterlooville, for whom he made 14 appearances in 2011-12 and 2012-13, and moved to Poole Town, where he played 27 games in the Calor Southern League Premier Division in 2013-14.

Derry, 19, began his career at Charlton Athletic before continuing his scholarship with Gillingham’s Development Squad in August 2013. Last season, he spent a successful three-month loan period with Conference South side Chelmsford City, making 16 appearances, scoring two goals and being named The Clarets’ Supporters Club Player of the Month for August and October. In December, he moved to Eastbourne Borough, where he played a further eight matches in Conference South.

“It’s nice to be part of the Club, and I’m ready to get started,” said Derry. “Hopefully this season will bring good things. I think I’ve shown more in training than I have on the field, but it was nice to play 90 minutes and get on the scoresheet against Sutton. I thought I did quite well in both of my loan spells and I want to test myself and show people that I can make the step up into the Conference.”

Andy Scott said: “Both Tom and Dan have impressed me in pre-season and shown that they can work well with the squad. I wanted to give them more time to show what they can do and that they deserve to earn longer-term contracts with the Club.”

Thomas has been awarded squad number 13, whilst Derry will wear number 19.