Gary Waddock has made six changes from the defeat at Chesterfield, including handing goalkeeper Will Mannion his debut as the Shots visit Solihull Moors at the Automated Technology Group Stadium.

Shot-stopper Jake Cole will be on the bench as 20-year-old Mannion, on loan from Hull City, gets his first chance to impress his new manager. 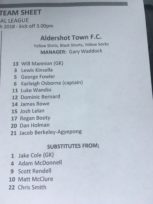