The National League’s official betting partner, LV BET take a look at the pick of the fixtures in Matchday 22:

• Barnet’s only victory in their last seven games has come at home to bottom club Chorley.

• Ian Evatt’s Bluebirds have kept three clean sheets in a row and have won their last four games at Holker Street.

• Barnet have taken only four points from 18 available on the road and have scored just two goals in their last five away matches.

• 16 of Wrexham’s 19 points have been earned at the Racecourse Ground.

• Good travellers Yeovil have won four of their last five away games and have yet to draw on the road.

• The Shots are still reeling from Saturday’s 6-1 hammering at Dagenham – their heaviest defeat of the season.

• Notts go into the game on the back of a 3-0 home reverse to Barrow.

• Aldershot have won three of their last five home games – but haven’t beaten any of the top seven teams this term.

• Only three sides have scored more than Notts’ 31 goals this season, Torquay, Barrow and Bromley.

• Sutton won their first game in eight at Torquay last weekend – only the second time they have avoided defeat since September 24.

• Matt Gray knows Sutton need to be more ruthless at home – they’ve scored in just one of their last four matches at Gander Green Lane.

• Bromley have found the net in all bar two games this season and have 37 goals to their name already.

• Dover are the country’s top performing away side – but at home they have only taken nine points from their ten games.

• Yeovil are the first top seven side Dover have beaten since August.

• Third-place Solihull Moors are the division’s fourth weakest performers away from home, winning only twice.

7/9 Both teams to score in Barrow v Barnet 16/5 Score between Wrexham and Yeovil level at half-time – and full-time 26/33 A goal in both halves between Aldershot and Notts County 61/20 Sutton United v Bromley to end in a score draw 22/9 Over 3.5 Goals in Dover Athletic v Solihull Moors

New LVBet customers will get a £5 sportsbook welcome bet when sign up. Claim the welcome offer here! (T&Cs apply) 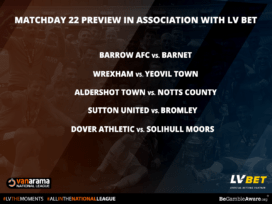