Our rivalry with Woking has produced some classic encounters over the years. Since our very first meeting, an FA Cup tie in 1998 where the deadlock was only broken in extra-time of the replay, the drama has been unrelenting. Whether live on national television, shaping a club’s very future, or ‘merely’ bestowing local bragging rights, these tussles have been tumultuous.

Here’s five of the very best…

Darren Barnard didn’t really score ordinary goals, but even by his standards this was special. 90th minute, 20 yards out, Adam Miller has been fouled after a typically mazy run, and Barnard steps up to nonchalantly caress a free-kick which loops over the wall and beyond the fingertips of Adriano Basso. Cue yet more delirium in the away end as The Shots snatch a first ever victory at Kingfield.

Steve Ferguson had capitalised upon two defensive lapses to roll the ball past Nikki Bull on 10 minutes and a feisty encounter threatened to boil over towards half-time, but after the break The Shots made a fine comeback. On 61 minutes, Sills stabbed in Hugh McAuley’s free-kick at the far-post and, when Justin Richards was sent-off for a petulant second yellow card, the visitors had momentum.

Barnard soon hit the crossbar from 35 yards as the game swung towards The Shots, but he left his real moment of inspiration until slightly later.

The Shots stormed back up to second place in the Conference with an Easter Sunday special live on national television.

Three goals to the good after barely half an hour, the hosts ran riot. On 17 minutes, Jake Robinson slid a neat pass through to Dwaine Clarke, who finished superbly from a tight angle, and 10 minutes later Barnard’s cross, flicked on by Watson, was only parried by Jalal and Tim Sills poached from inside the six-yard box.

The 31st minute produced that rarest of sights – a Barnard right-foot shot – as The Shots smashed a third from 20 yards. Home fans taunted the Cards with cries of “Easy! Easy!” but had to wait until two minutes from time for the fourth. By then, Jon Boardman had been dismissed for a second bookable offence, and Nick Crittenden burst down the right to send over a deep cross which substitute Jon Challinor guided back across goal with a deft header.

Future Cards striker Scott Rendell made a late cameo appearance for The Shots but it was left to Barnard to sum it up as he told Sky Sports: “A 4-0 win against your local rivals, it doesn’t get much better than that really!”

The promotion-bound Shots remained top of the Blue Square Premier with a victory which manager Gary Waddock dedicated to former Director and Supporters Club Chairman, Paul Muddell, who passed away minutes after seeing his team win 1-0 at Kingfield on Boxing Day.

Kirk Hudson and Ricky Newman put the Shots two goals up inside the first 30 minutes in front of 4728 – the largest home attendance in eight years – and the hosts then withstood a second-half onslaught from Giuseppe Sole to extend their run to just two defeats in 16 games.

Jonny Dixon’s lovely reverse pass, on 20 minutes, found Hudson’s diagonal run and the winger beat the advancing Nick Gindre with ease. Seven minutes later, Anthony Straker was sent streaking down the left and his cross was guided into the bottom corner by Newman.

Substitute Dave Winfield was penalised at the start of the second-half, and Sole blasted in the penalty, but Nikki Bull made a fine save to tip his free-kick over the bar.

Just as Woking looked to have finally got the measure of their local rivals, three goals in the final quarter saw The Shots complete a hat-trick of victories in just over two weeks.

The Cards held deserved sway for an hour of this FA Trophy clash, only to fade badly as Aldershot Town cut swathes through a hitherto solid defence. Two early goals illuminated a feisty first half in which Marvin Morgan and debutant Jason Norville terrorised the Shots’ defence.

Louie Soares gave the visitors an early lead but Norville soon equalised and Woking led on 53 minutes as Morgan fired into the top corner.

Although a move of real quality, the fourth was perhaps harsh on Woking, as Harding invited Dean Smith to shoot and John Grant rolled in another rebound.

Lewis Chalmers finished the match shrouded in red mist and ready to take on the entire Cards team, but once he’d calmed down could reflect on another display of indomitable team spirit.

The Shots completed the great escape in typically thrilling style as a tumultuous derby day victory confirmed our place in the Conference Premier. It was an afternoon in which fans again endured the full gamut of emotions, but the celebrations at the final whistle – after Mark Molesley’s late, deflected winner – ensured it ended on the highest of highs.

This was a classic local derby and exemplified Aldershot Town’s resurgence in the last month of the season. Woking enjoyed periods of dominance at either end of the first-half, but in between, and for much of the second-half, it was The Shots who held sway.

On 63 minutes, Manny Oyeleke’s 20-yard shot was handled by Mike Cestor and Brett Williams scored with a nerveless penalty. The lead, though, lasted just nine minutes, as a corner was only half-cleared and Scott Rendell teed up Brett Johnson to slide the ball into the net.

But, as we’d come to expect, it was Mark Molesley who once again made himself the hero, as his 20 yard shot brushed John Nutter and bounced across goal past the wrong-footed Beasant. Even before they’d subsided, the joyous scenes in the away end were already the stuff of legend. 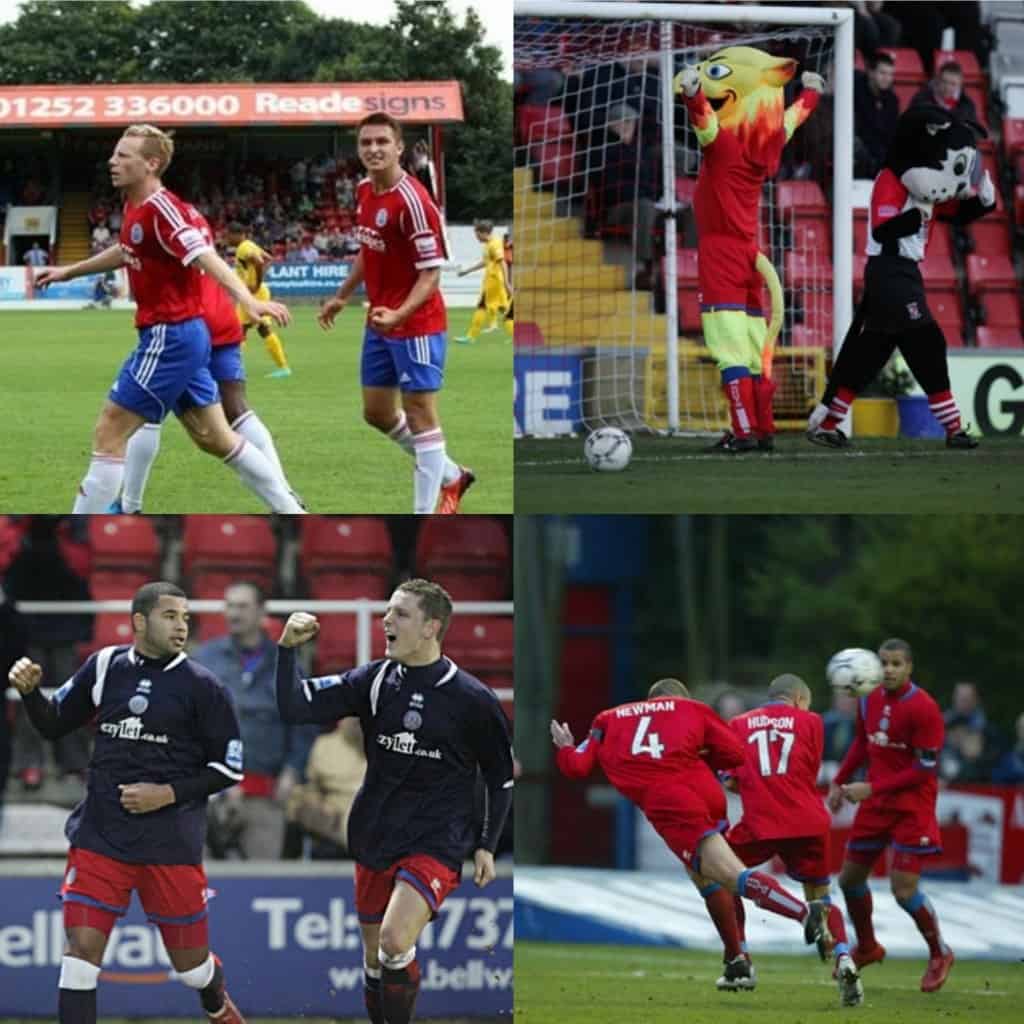