Aldershot Town visited Nepal’s renowned Sahara Academy in Pokhara, to learn more about this unique charity and donate over a thousand pounds worth of football equipment.

Shots striker Ashley Bayliss and squad captain Ben Hutchings presented a signed Aldershot Town shirt to Sahara Cub President Bir Bhadra Acharya, before Director John Leppard was awarded a Token of Love, on behalf of The Shots. Several bags of boots, shirts, shinpads and sweatbands, as well as a bag of footballs, were donated to the charity, which receives no government subsidies and instead relies solely on private funding.

Initially established as a football club in 1998, Navin Gurung founded Sahara UK after returning to his civil war-ravaged home country and converted Sahara into a charity with the aim of “turning orphans into athletes”. Providing both education and football coaching to disadvantaged Nepalese children, Sahara (which in Nepali means “support”) is Nepal’s most successful charity and has even been praised by the country’s Prime Minister.

Currently home to 21 children, aged between nine and 11, Sahara’s day begins at 6am, when pupils have breakfast, followed by a day which combines sport and classroom work until 7pm, at which time they begin their daily homework programme.

Of those 21 children under Sahara’s care, only two have both parents alive and still caring for them, and nine have been orphaned either through death or absenteeism. The Academy hope to increase their intake to 30 in the next few years, and help rescue even more children from a life of sleeping on the streets.

The Academy have organised all 13 stagings of the Aaha! RARA Gold Cup – the profits of which helped to build their new clubhouse and headquarters in 2014 – and last year won the tournament themselves for the very first time.

Sahara’s most famous graduate is Anil Gurung, who now plays for Aaha! RARA Gold Cup favourites and current National League champions Laxmi Hyundai Manang Marsyangdi Club (MMC). Gurung, who came off the bench to score both goals as MMC came from behind to beat Tribhuvan Army Club 2-1 in the Gold Cup quarter-final on Wednesday, says: “It is my second home. The Academy showed me the path to reach where I am today. Before I came here, I was a simple person. Now everyone in Nepal recognises me.” 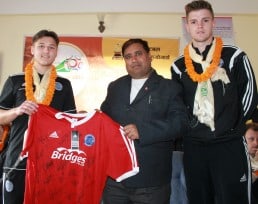