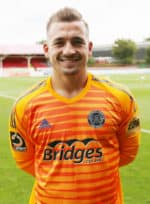 He was named on the bench for today’s National League defeat away to Ebbsfleet United and was given squad number 25.

He will remain at the Shots whilst Will Mannion has returned to Hull City to receive treatment for his injury on a short term basis.

Oualah, 23, was previously at Hayes & Yeading United and Leatherhead last season and has also played in Algeria for US Biskra.