Aldershot Town warmed-up for the Aaha! RARA Gold Cup with narrow and somewhat unfortunate defeat against a Nepal Police XI.

The friendly, at Himalaya Barracks, in the Chhauni district of Kathmandu, was played over two halves of 35 minutes in increasingly broiling early morning heat, and settled by a scrambled late goal for the hosts.

Yet as an exercise in acclimatisation to both the weather and Nepal’s dusty dry pitches – as well as running off the tiredness of the 16 hour journey from London – this was a successful venture.

Sam Hutchings drove wide with The Shots’ first chance, after the Nepalese goalkeeper flapped at Mellors’ cross, and Josh Francis pulled a good chance wide of goal, but the first-half proved an even if keenly-contested affair. The Police appeared to have the ball in the net at the end of the opening period, after a free-kick struck the wall, but the referee adjudged that the ball had skidded wide rather than through the rather porous netting.

The best chance of the half fell to Mellors, put through down the left by Ben Hutchings to hit a tightly-angled drive which hit the crossbar. Substitute Brandon Lewington immediately galvanised The Shots into a domineering second-half display, and within seconds saw the keeper parry his one-on-one after a neat pass from Mellors.

Yet the suckerpunch came with just five minutes remaining, as Nepalese pressure finally saw the ball bundled over the line at the far-post. Still The Shots had chances to equalise, but will know that they need to be more clinical in Tuesday’s Gold Cup quarter-final in Pokhara. 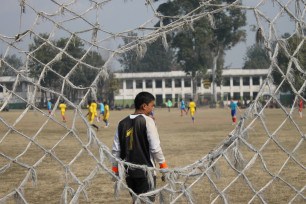