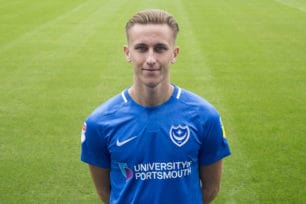 Aldershot Town have signed central midfielder Adam May from League One side Portsmouth on a youth loan until 5th December.

The 20-year old midfielder has played 26 times for Pompey so far and has also spent time at Gosport Borough and Sutton United on loan.

Born in Southampton, he made his Portsmouth debut aged just 17 in a League Two match against Bury, he then played three times for Gosport Borough in the National League South before his loan move to Sutton.

He played 29 times for the U’s, scoring three goals. He was part of Sutton’s famous FA Cup run in 2017 playing in their Fourth Round victory over Leeds United and in the Fifth Road against Arsenal at Gander Green Lane.

He was awarded Sutton’s Young Player of the Year at the end of that season before returning to Portsmouth in League One where he made 18 appearances in all competitions last season.