There was late drama at the EBB Stadium last night as Danny Searle’s team beat Anwar Uddin’s men in a sudden death penalty shoot-out for yesterday’s Shots For A Day event.

Defender Alex Freeman was Searle’s match-winner, prior to an exciting victory for Danny Searle’s team that sees him keep the bragging rights over his Assistant Manager Anwar Uddin.

A unique game between two sets of Shots fans, all of whom had bid for the privilege, Uddin’s squad took a shock 1-0 lead, thanks to Liam Humphrey’s composed finish, only for Searle’s team to roar back with three quick-fire goals.

It was a tough ask for Uddin’s team to respond in the second-half and despite piling the pressure early on, Searle’s attacking force was too much for them as they come out on top with a comprehensive victory.

However, Uddin’s men were given the chance to hit back with a final penalty shoot-out to decide who would come out victorious.

It was a tense watch for family, friends and first-team player Harrison Panayiotou in the stands with the selected five from both sides scoring four each, leaving it to go down to sudden death.

Following Uddin’s men missing the chance to win the penalty shoot-out, Freeman stepped up to ensure Searle would lead the bragging rights ahead of our first-team fixture away to Dover Athletic on Saturday.

Both squads had enjoyed a pre-match meal in the EBB Lounge, after which the two managers gave their squads in-depth analysis of our recent opposition Chorley FC.

The warm-ups were led by both Danny Searle and his First-Team Analyst and Coach Michael Koopowitz, with Anwar Uddin leading his team’s preparation.

“It was a great day but the best thing for me is that this event was a win for everyone involved” said Commercial Manager Mark Butler.

“The fans have paid some money into the club and the fans were given the opportunity to be a Shots for a Day which is a great thing for everyone and a dream for most, if not all the guys out there.”

“Danny and Anwar deserve huge credit for giving their time and management skills so freely and openly, and thanks also to the Club’s backroom staff and volunteers for participating. Finally, our thanks to Duncan Cole and his company AVIS Group, for their sponsorship of the game. Their support is always much appreciated.”

The game also was privileged enough to be sponsored by one of the player’s Duncan Cole’s AVIS group who in turn, donated their sponsorship to the Mental Health Charity MIND and you can find the link to their JustGiving page below:

The evening ended with pizza for all friends, family and players at the event, before ‘We Are The Champions’ being blasted out of the home dressing room from Searle’s team.

Plans for Shots for a Day 2022 are currently being arranged. 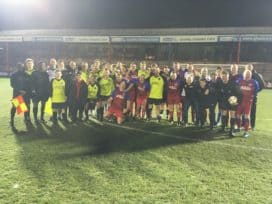 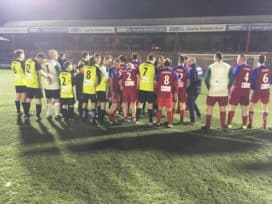