Over 2000 people helped Aldershot Town FC and Aldershot Garrison to commemorate the centenary of the legendary 1914 Christmas Truce last night with a special outdoor carol concert.

The evening was introduced by Shots Chairman Shahid Azeem and Club Chaplain Rev Mike Pusey, as the Garrison and civilian communities united in memorial of this unique part in British history.

The centrepiece of the evening was an excerpt of acclaimed play Our Friends The Enemy, featuring a dramatization of the football match which took place in No Man’s Land as part of the Truce in December 1914. Gunfire and a chorus of Stille Nacht drifted across the Electrical Services Stadium, before the game – won, in this instance, 2-1 by the German troops – ended with the poignant words around which the entire evening hinged: “Eventually both sides returned to their trenches, wishing that the war could be fought over a football match”.

Azeem said: “The evening was a tremendous success. There were some wonderfully poignant moments and it was amazing to see the East Bank full of troops. The entire community was united, and it is important that Aldershot Town plays its part in galvanising our communities.

“We are immensely grateful for the support of the sponsors who made this event possible. So many people gave their time and resources, and it shows what is possible when people come together. We are proud to represent the Home of the British Army, and to remember such a special moment in time. We also hope to have raised a significant amount of money for local charities, and thank everybody who gave so generously.” 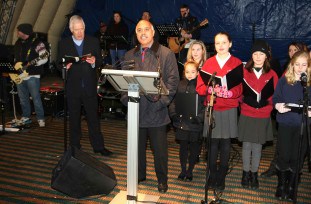