Rushmoor-based Nepalese organisation Sahara UK has purchased £10,000 of shares in Aldershot Town Football Club to further strengthen the relationship between The Shots and the local Nepalese community.

The purchase, agreed over a month ago but delayed to allow both parties to concentrate on the relief effort for those affected by the earthquakes which hit Nepal in April and May, confirms Aldershot Town’s position as the adopted football club of Sahara UK and the Borough’s Nepalese population.

“This is a historic moment and we are extremely grateful for Sahara UK’s support with what represents a significant investment into the Football Club,” said Shots Chairman Shahid Azeem. “Nepalese people love football, and the sport can really help us to become a champion of their community, and enable us to understand their culture better. We want to be the most inclusive and diverse football club in the country and hope to galvanise the entire community through football.”

“It is a great honour and pleasure to be accepted as shareholders of Aldershot Town FC,” said Min Guring, Vice President of Sahara UK. “We have always considered Aldershot our home, and it is no surprise that this relationship has grown so strong. We recognise that integration has always been an issue on both sides, and we need to galvanise ourselves as part of our local society. We hope to work closely with the Football Club, and use football to help our community integrate further.

“Football is a universal language and can be used for the greater good. There is a lot to learn, and a lot to teach, but if we move forward in a positive manner I’m sure we can achieve a lot to help this town. There is no such word as ‘impossible’.”

“Sahara UK are fully committed to our town, and have already shown great commitment to the Club, and we hope to work even closer with the community in the future,” continued Azeem. “Sahara UK have suggested that they want to learn from us, but we also need to learn a lot from them, particularly to understand their culture.

“Aldershot Town were made to feel extremely welcome when we visited Nepal in February and we want to give something back to a country which has given so much to Great Britain for over 150 years. We continue to stand side by side with the people of Nepal, in the aftermath of the devastating earthquakes which hit the country, and hope that in some small way we can offer financial and moral support.

“I would particularly like to thank Sahara UK President Dilip Gurung, and founder Navin Gurung, who have been instrumental in forging such a strong relationship.”

Aldershot Town are currently working with several Nepalese students on a combined marketing plan to benefit both the Club and local community, and hope that a representative of Sahara UK will join the Club’s Board of Directors in the very near future.

Nepal’s spiritual leader, His Holiness the Dalai Lama, will make a return visit to Aldershot Town’s Electrical Services Stadium, on 29 June, to open the new Buddhist Community Centre, adjacent to the Club, and deliver a public address to an audience inside the stadium.

Founded in 2008 and based in Farnborough, Sahara UK is the sister charity of the Sahara Academy, which used the profits from the first Gold Cup to improve the welfare of 18 underprivileged boys in Pokhara, as well as fund a sports centre and youth hostel. Working alongside branches in Norway, Germany and Italy, Sahara UK and the Pokhara Academy Children’s Trust have previously held fundraising events, including football tournaments, concerts and dinners, across Europe and in Nepal. 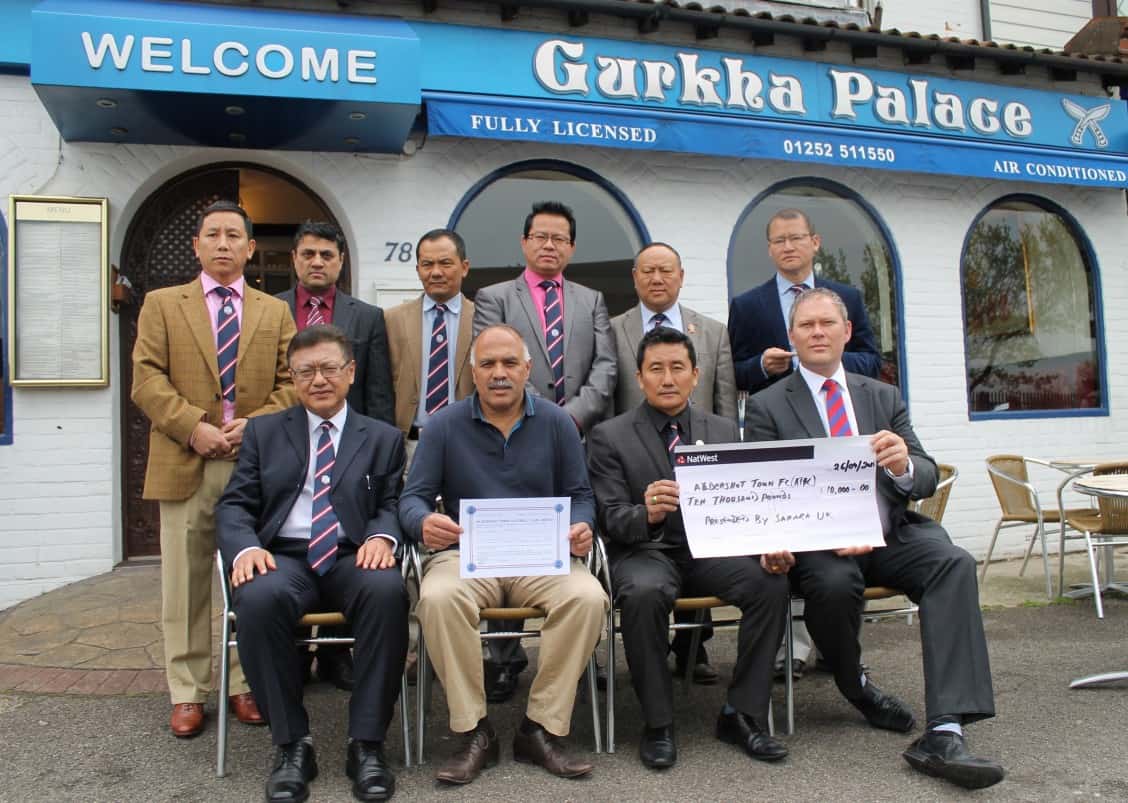 We are delighted to announce that defender Brad We...

Tomorrow sees Aldershot Town back at the EBB Stadi...

We Say Thank You To Tesco Aldershot!

WHO ARE THE SHOTS PLAYING? Altrincham FC, The R...

LOAN WATCH: An update on our loaned-out players (November 2021)

Currently five Shots players are playing out on ...

We start our Buildbase FA Trophy campaign in the t...