With the Poppy Appeal for The Royal British Legion already well underway for this year, we have already had our annual large poppy displays put in place ahead of our Remembrance Match in respect of our army against Notts County on November 7th, as it is our closest fixture to Remembrance Sunday.

In preparation for our encounter with Notts County, the Army, (along with our own volunteers) have visited and helped us in putting up these poppy displays around the stadium, which we are very grateful for.

Ahead of this game, we will recognise this time of year in the best way we possibly can in line with current Covid guidelines along with the two minutes respected silence prior to kick-off. 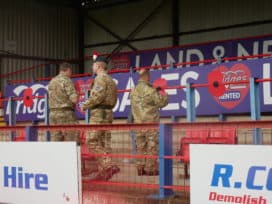 This will be shown as part of our Shots TV Live programme which fans from both sides will be able to access HERE, as we wish to remember our fallen war heroes together, despite the difficult circumstances of not being able to have fans in the ground due to Covid restrictions as this moment in time.

We will also be wearing a home shirt with temporary poppies for the home game against Notts County on the 7th November. On top of this, we will be wearing our official poppy shirts for our away game against Altrincham on the 14th November, which will be auctioned shortly after the game. 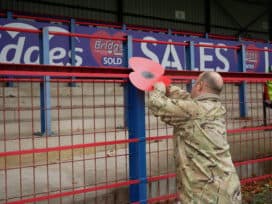 As we are also unable to run our usual bucket collection for the Royal British Legion around the ground at the game as well, we will instead allow fans to donate to our Remembrance Wall on our website, which will allow fans to raise funds for the Army and for those who have fallen for us all those years ago.

We also spoke to both Chairman Shahid Azeem and Lt. Col. Paddy Baines MBE about what the Army and the Poppy Appeal means to both parties following their visit to the football club earlier last week, see below for the full video: