Exciting academy prospect Reece Wylie has committed to the club for the 20/21 season as he joins the first-team squad!

The young midfielder has shone for the academy and is highly thought of at the club, in addition to elsewhere.

The 18-year-old is an Aldershot Town supporter himself, being from the area, and has been part of the academy set-up since he was just eight years-old! 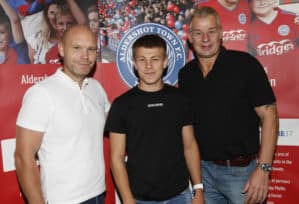 He has was involved in a couple of matchday squads before the postponement of last season’s National League campaign, but he will hope to make a few appearances in the upcoming season.

The club is delighted that he will be continuing his development within the first-team set-up in the 20/21 campaign.

Reece said upon agreement of the deal: “I’ve been at this club since I was eight, so in football terms it’s all I’ve really known.

“I’m just excited to get going, get on that pitch and show the fans what I’m about.”

Everyone at the club would like to congratulate Reece on the deal and his commitment to the Shots for the 2020/21 season.

Welcome to the First Team Reece!

If you would like to sponsor Reece’s shirt for the 2020/21 season then please contact Commercial Manager Mark Butler on mark.butler@theshots.co.uk or call 01252 320211.