Aldershot Town goalkeeper Ryan Hall signed his first professional contract today when he committed to the club for the 20/21 season!

The 19-year-old has been at the club for three years (this will be his fourth), starting in the academy setup before training with the first team for the majority of the 19/20 season.

He captained the team in first team debut in the FA Trophy against Bedford last year.

Ryan featured five times on the bench in the National League last season and has been rewarded with his first professional deal. 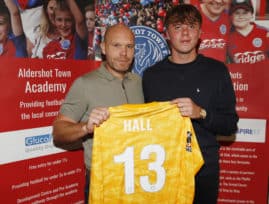 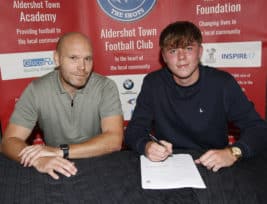 Ryan said: “I’m very excited, it’s something I’ve been waiting for for quite a while now ever since I came to Aldershot.

“I feels really good to finally be there.”

If you would like to sponsor Ryan’s shirt for the 2020/21 season then please contact Commercial Manager Mark Butler on mark.butler@theshots.co.uk or call 01252 320211.