Aldershot Town are delighted to announce that Jamie Sendles-White has agreed to commit to the club for the 2020/21 Season!

The former Northern Ireland youth international commits to the club after a spell with Crawley Town in League Two, having previously spent time in the Scottish Premiership with Hamilton Academical as well.

Sendles-White made 14 appearances for the Red Devils in League Two last season, along with also recording one assist for Crawley Town during this time.

He has also previously won promotion to the National League in 2018/19 with Torquay United, playing 23 times and will be looking to further his National League promotion record with Aldershot Town next season. 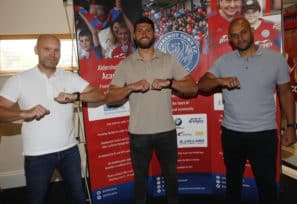 Everyone at the club would like to welcome Jamie on his commitment to the Shots for the 2020/21 season.

If you would like to sponsor Jamie’s shirt for the 2020/21 season then please contact Commercial Manager Mark Butler on mark.butler@theshots.co.uk or call 01252 320211.