Aldershot Town are delighted to announce that Shadrach Ogie has joined the Shots on an initial one-month loan!

The Irish defender who moved over to England to join League Two side Leyton Orient, came through the academy system there before signing full professional forms in February 2019.

After impressing in their youth systems, Ogie made his first-team appearance for Orient in a 2–0 EFL Trophy win against Southend United back in September last season, before strong loan spells at both Isthmian League club Bishop’s Stortford and fellow National League club Dover Athletic over the course of last season.

Aldershot Town fans may also remember Ogie’s man-of-the-match performance in our away fixture against Dover Athletic last season, scoring an impressive solo goal that saw the Whites come out 2-0 victor back in January. 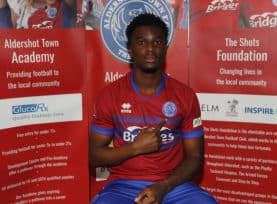 The 19-year-old has also performed on the international stage too, making his debut for Republic of Ireland under-18’s against Turkey U18, a month after making his under-19 debut for Ireland in February 2019.

Aldershot Town manager Danny Searle has been on the lookout for a new left-back, given the extended injury to starting full-back Lewis Kinsella and is delighted the Limerick-born defender will be with the Shots for the forseeable future.

If you would like to sponsor Shadrach’s shirt for the 2020/21 season then please contact Commercial Manager Mark Butler on mark.butler@theshots.co.uk or call 01252 320211.