Aldershot Town are delighted to announce the signing of Watford winger Joseph Hungbo on a short-term loan deal!

The 20 year-old started his career in the youth system at Premier League side Crystal Palace, where he was named Under-16 Player of the Year and also captained the club’s under-18 side, before signing a professional contract in 2018.

Following this, Hungbo saw himself sent on his first loan to Isthmian League Premier Division side Margate FC in January 2019, before switching from Palace to Watford in July later that year.

After his move to Watford and an impressive run of form with their under-23’s, Hungbo was involved in the Hornets’ away Premier League game against Leicester City in December 2019.

Hungbo continued to impressive within the under-23’s side and was earned his first-team debut for Watford in a 2–1 FA Cup third round replay defeat against Tranmere Rovers and will be looking to continue his development with his loan spell spell here into the National League.

He will wear number 17 during his time with us at Aldershot Town. 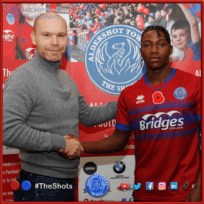 Joseph said upon his arrival at the club: “I’m delighted to be here and I can’t wait to get going.

“I can play behind the striker, play on the wing, all I like to do is score goals, create havoc for defenders and be an absolute nightmare, so hopefully I can do that while I’m here.”

If you would like to sponsor Joseph’s shirt for the 2020/21 season then please contact Commercial Manager Mark Butler on mark.butler@theshots.co.uk or call 01252 320211.