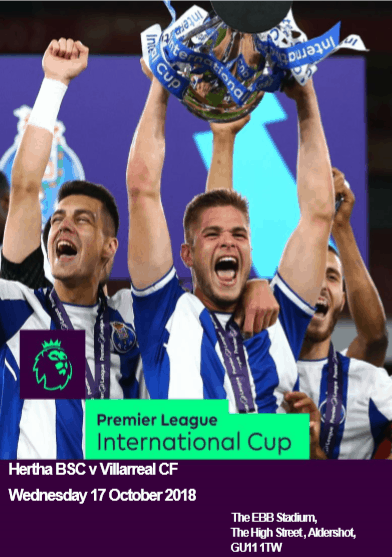 Aldershot Town will have their latest Premier League International Cup fixture at the EBB Stadium on Wednesday night when the U23 sides of Hertha Berlin and Villarreal meet at 7PM.

The two sides will send players from their reserve squads with Hertha BSC II playing in the Regionaliga Nordost in the German fourth tier, where they currently sit third in the table, Villarreal B play in the Segunda Division B Group III, which is the Spanish third tier.

Both clubs boast the finest academies on the continent and there will certainly be some of Europe’s brightest talents on the pitch for the 7PM Kick Off.

Tickets are priced at £3 Adults and £1 Concessions.