An impressive 248 travelling supporters made the trip around the M25 to Meadow Park, home of Borehamwood FC, for The Shots first visit in almost thirteen years. 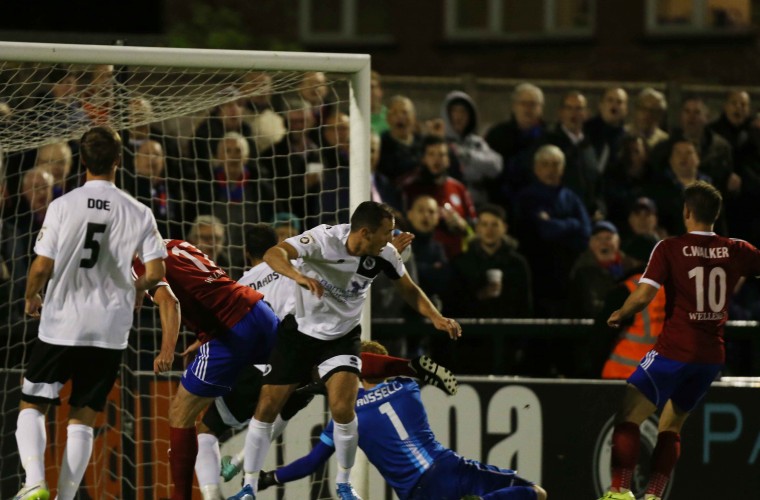 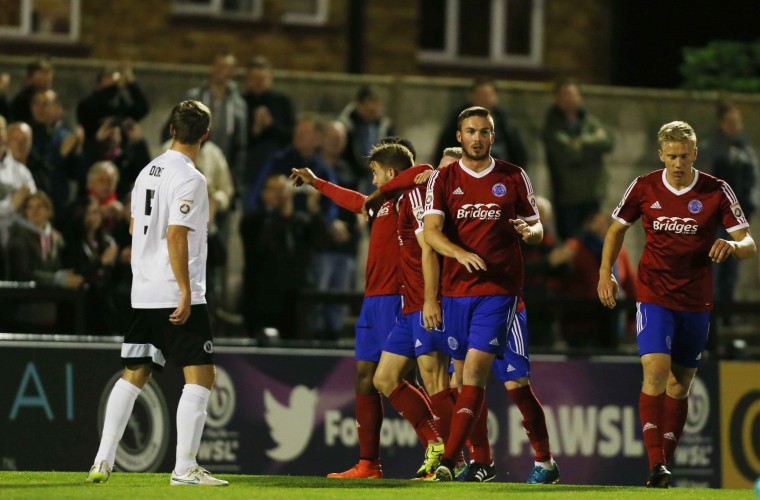 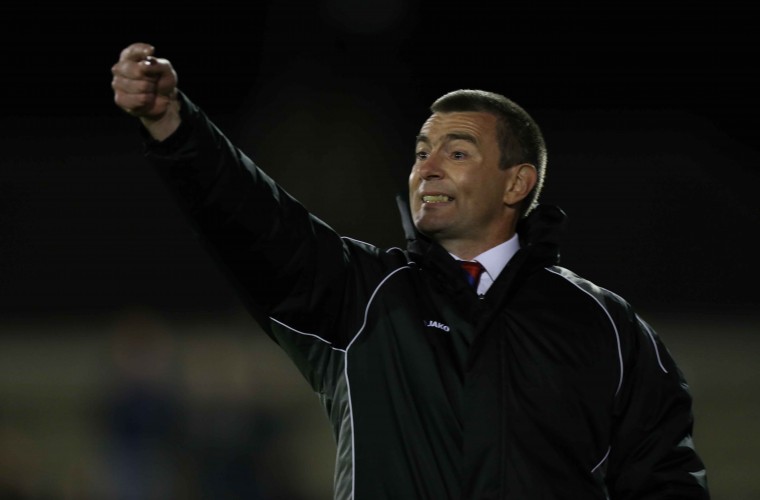 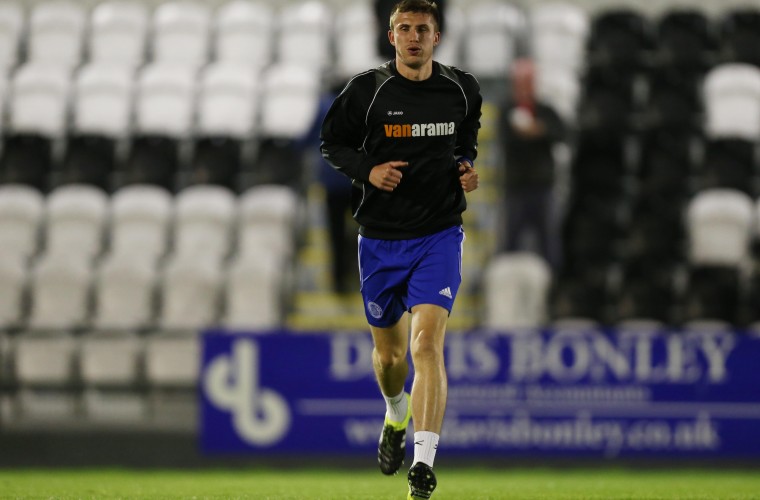 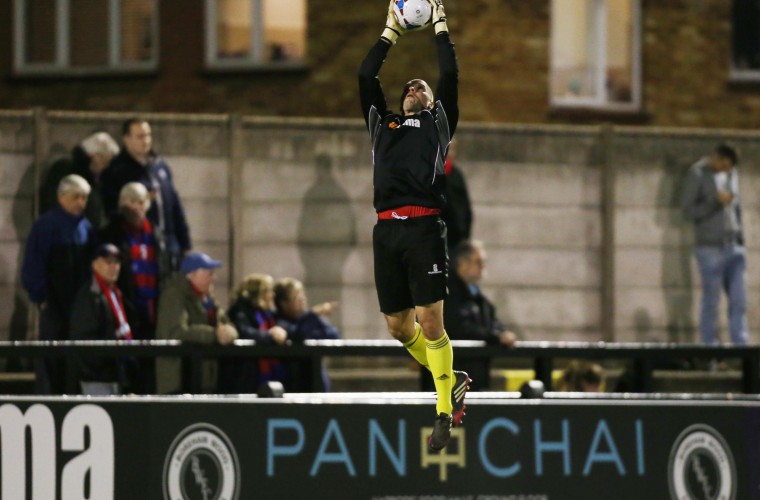 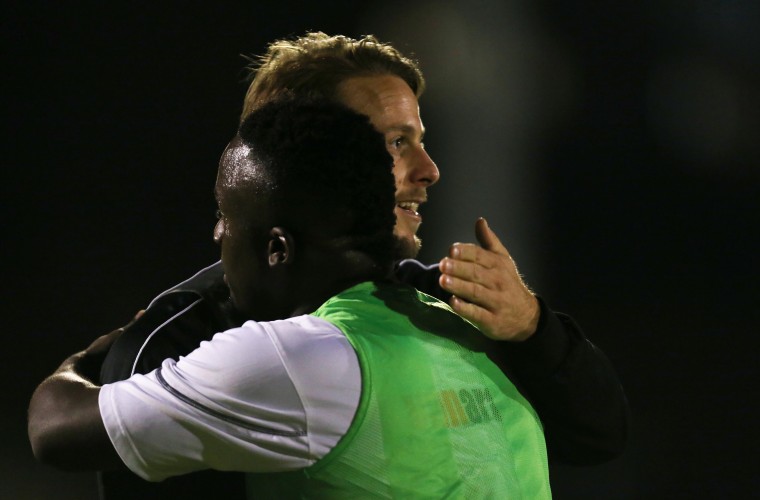 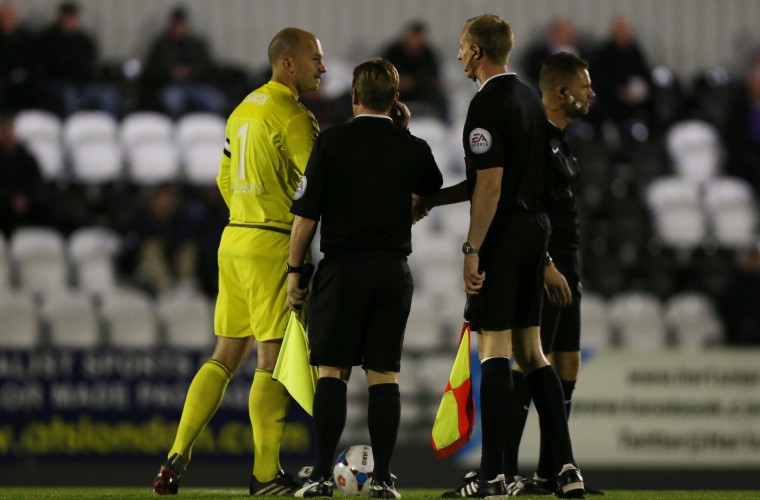 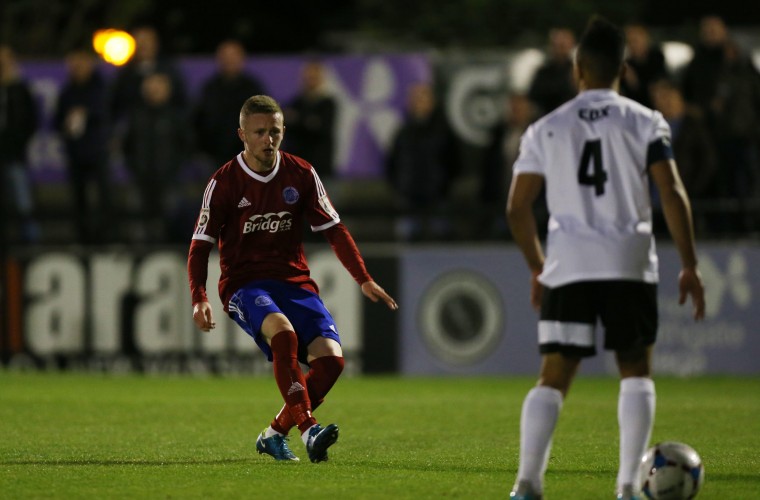 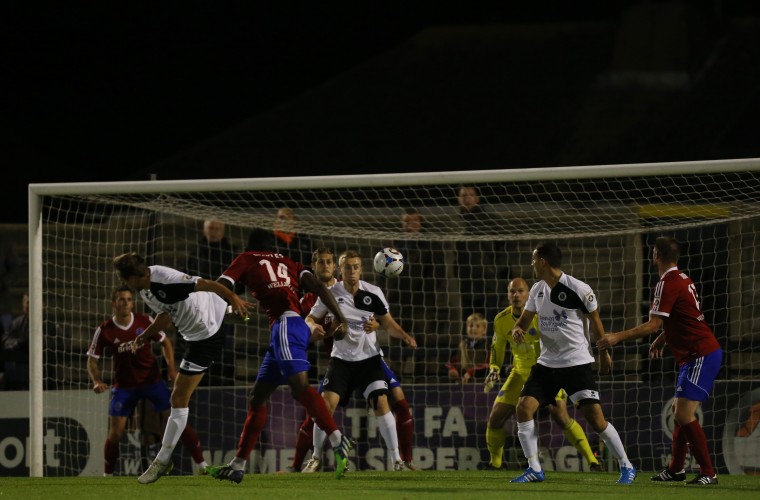 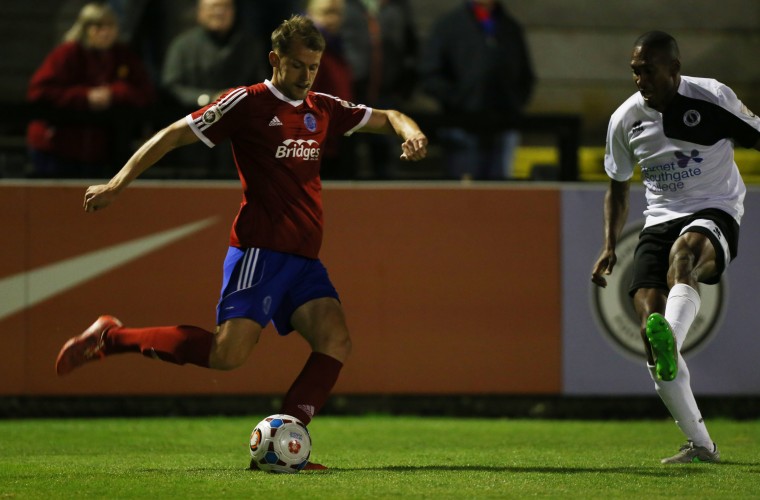 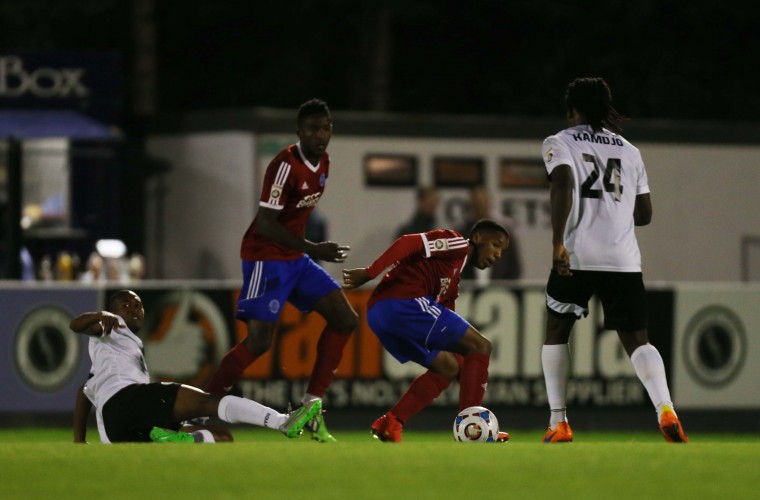 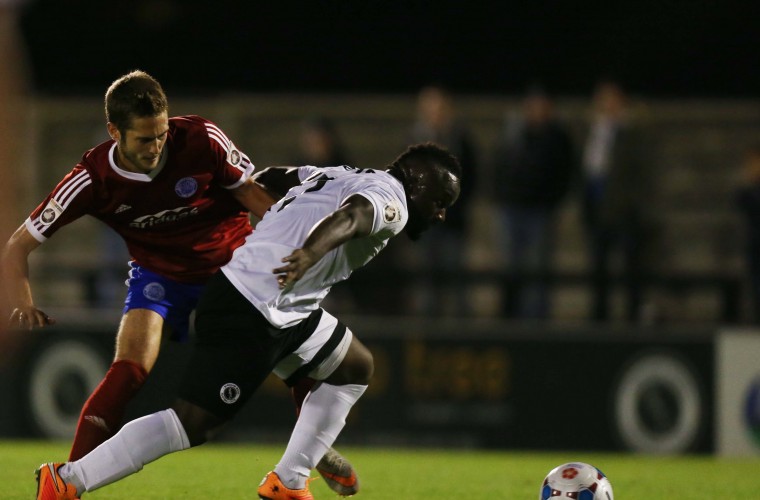 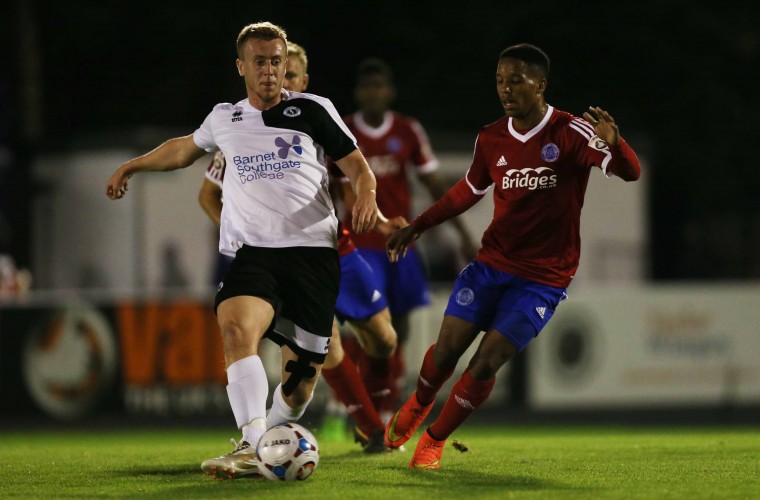 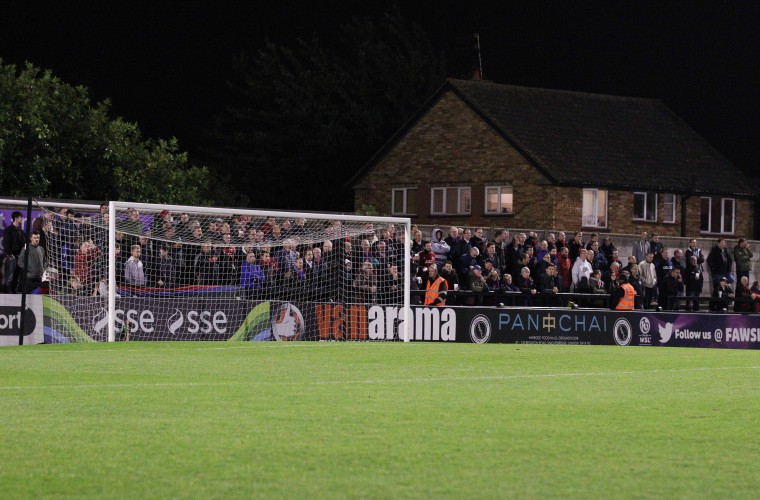 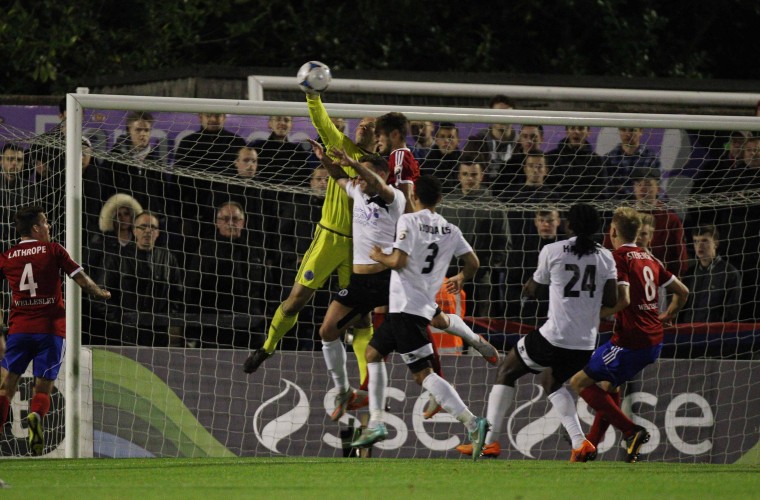 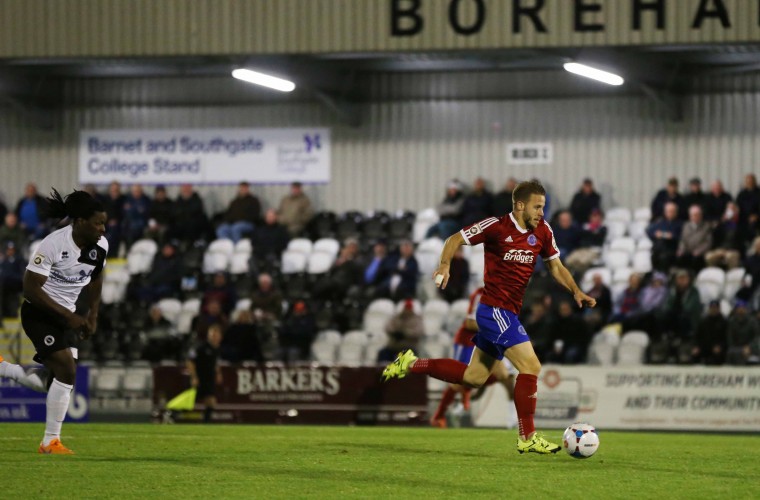 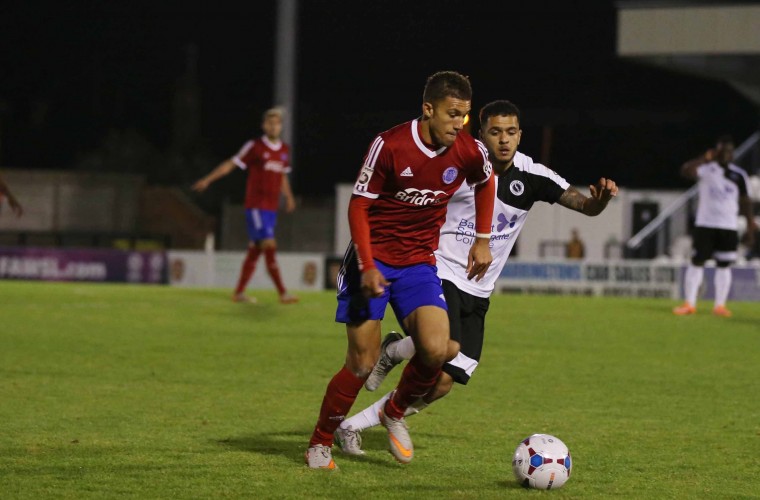 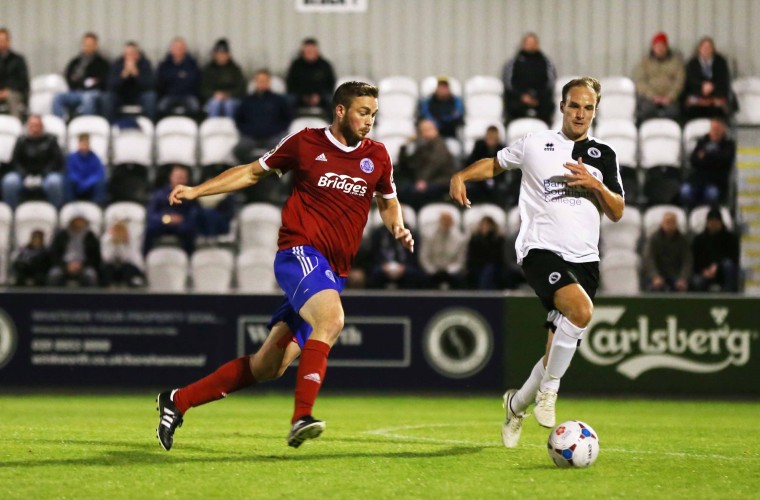 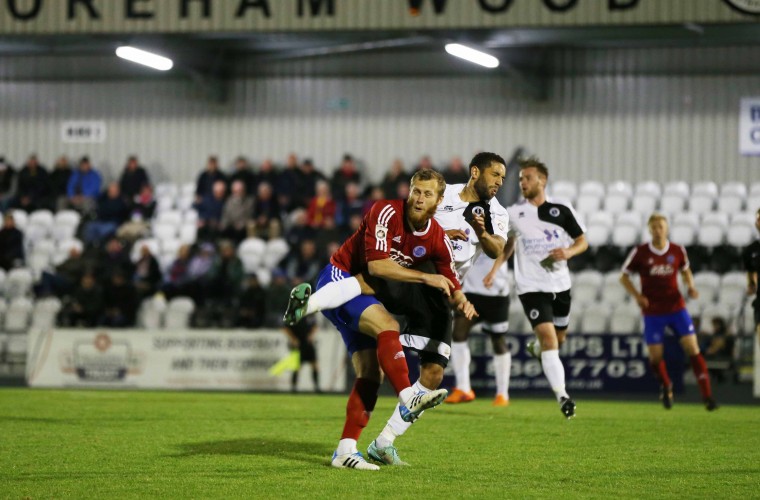 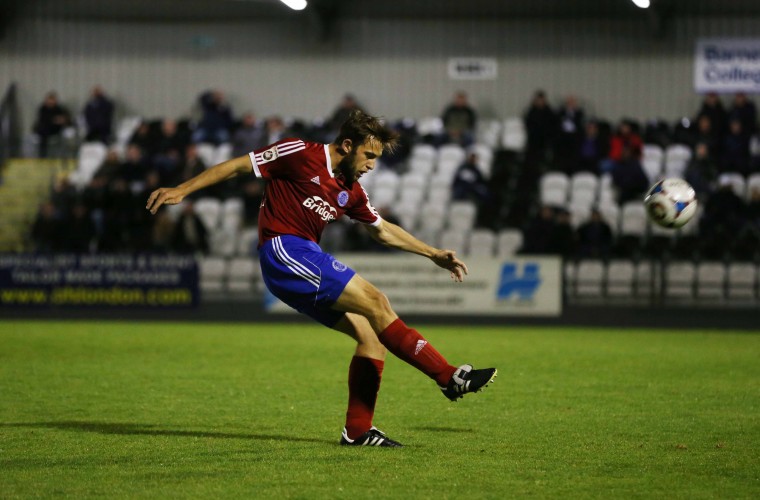 They were rewarded with a gritty and resilient performance, a poachers finish from Ex-Wood striker Charlie Walker, a clean sheet and three precious points which took Barry Smith’s men up into the top half of the National League table. Walker’s early strike, poking home at the far post in the 10th minute after Omar Beckles towering leap and knock down, was ultimately to prove the difference between the two sides.

In truth, the result was a little harsh on the home side, who – despite the resignation of their manager Ian Allinson 24 hours earlier – showed no ill-effects and dominated the match for long periods. However they came up against some dogged defending from the visitors who worked tirelessly to protect their early lead and held firm until referee Rob Whitton brought proceedings to an end after 94 minutes.

The Shots, playing in their Red & Blue home kit, found themselves under pressure from the outset, as ‘The Wood’, in Black & White, took the game to them right from the kick off. In the opening 10 minutes, Aldershot barely got out of their own half, but when they finally did, it was to great effect. Rhys Browne, showed good strength to win the ball in midfield before playing the ball to Charlie Walker, who was bundled over by Joe Devera and from the resulting free kick, Walker pounced for his 8th goal of the season.

The home side spurned three half chances to level over the next ten minutes. Lucas poked wide from three yards, Morias header over and Devera headed wide. Damon Lathrope, starting his fourth match in two weeks, picked up an early caution – one of just two yellow cards on the night for the visitors, who – going into the match – had received more than any other side in the National League. Richard Brodie’s in the 2nd half, was a tad harsh to say the least.

Borehamwood came closest to levelling in the 43rd minute, when after a neat move, the ball broke to Jamie Lucas – but he was denied by a point blank save from Shots stopper Phil Smith – who looked a calm and assured figure all night in the visitors goal.

The second half began much like the first, with The Wood on top – Billy Clifford twice threatened, but shot high and wide the first time and was foiled by the hard working Browne, whose back-tracking, non-stop work-rate, typified The Shots resilience on the night. On the hour mark, Ricky Shakes header produced a good reaction save from Smith, who was called into action again ten minutes later, diving away to his right to stop a 25 yard thunderbolt from Conor Clifford.

Skipper Sam Hatton came on for Dan Walker and Jake Gallagher – returning from a three match suspension – replaced Lathrope as The Shots showed great professionalism to see the game out. Indeed, their slender lead was almost doubled, when Jim Stevenson latched onto a poor clearance and let fly with a sweet volley, that Wood keeper James Russell reacted late to push wide.

There was still time for a final flurry from the home side, who forced a couple of corners in the four minutes of added time. Gallagher blocked substitute Anthony Jeffrey’s drive and then had the final say, heading clear at the near post before Whitton’s whistle confirmed back to back victories for The Shots, with consecutive clean sheets to boot.

So many times in recent seasons, Aldershot Town have conceded late on to see potential wins turn into draws and potential draws into defeats. However, on this occasion, they held firm to record their fifth away victory of the season.