A double from Courtney Duffus and an Albi Skendi finish condemned Aldershot Town to an away defeat against Yeovil Town as both teams finished with 10-men in Somerset in the National League at Huish Park.

Yeovil got the opener through Duffus’ volley into the bottom corner before his swivelled effort from just inside the box doubled the Glover’s lead.

Jermaine Anderson was sent off in the later stages of the game which allowed Yeovil to kill the game off through a late Skendi goal to seal an important win for the hosts. The game ended with 10 against 10 as Joe Quigley was sent off for Yeovil after a late challenge on Shadrach Ogie.

The first opportunity of the game fell to Yeovil and they got the opener after 16 minutes when a long ball was headed down for Duffus before he volleyed smartly into the bottom corner.

Yeovil had another opportunity when a backheeled effort almost caught out Brad James in goal before the resulting corner went over the bar for a goal kick.

Aldershot had a great chance to equalise when George Fowler drove forward with the ball and curled a wonderful effort towards the far corner but Adam Smith in the Glovers net produced an excellent save to tip the ball onto the post.

Aldershot came close again just after the interval when Toby Edser almost found Harrison Panayiotou but his pass was slightly overhit and the ball was gathered by Smith.

The momentum was swinging in the favour of the Shots. Fowler again on the right-hand side causing problems produced a cross that found Panayiotou who headed it down for Anderson who couldn’t get a touch on the ball and the Yeovil defender cleared the ball off the line.

Yeovil started to come forward and the Aldershot defence did well to block a series of Quigley shots before Skendi’s pass went out for a goal kick. Moments later, Aldershot had a wonderful chance to equalise but Josh Rees’ shot was blocked by a Yeovil defender.

Aldershot’s pressure came undone when Yeovil doubled their lead just over 10 minutes from time. The free-kick came in and Carl Dickinson played the ball to Duffus who directed his swivelled shot into the bottom corner to grab his second of the game.

Anderson got his second yellow card of the game and Aldershot were down to 10-men which made life more difficult for the Shots in the final minutes of the game. Yeovil sealed the win when Dickinson’s free-kick fell to Skendi who slid in to poke the ball home.

The final act of the game was another red card but it was for Yeovil this time as Quigley was sent off after receiving his second yellow card of the game due to a late challenge on Ogie.

Aldershot piled on some late pressure to get a goal back but Yeovil secured a clean sheet and an all-important win in Somerset. 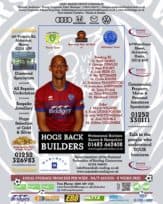