Aldershot Town’s three game unbeaten run came to an end as they narrowly lost 1-0 to Wrexham AFC in the National League at the Racecourse Ground on Saturday.

It was a relatively even match, with the home side having the slightly better opportunities, especially in the first period, with Brad James making one or two good saves.

After starting the second half the strong, the Shots fell behind to a great strike from Wrexham midfielder Luke Young.

The defeat means the Shots drop down to 15th while Wrexham move up to 11th.

The home team had the first chance of the game through Jordan Ponticelli. He was found in the middle but was denied by a brilliant Brad James stop, who came out to smother brilliantly.

The second big chance came just two minutes later again for Wrexham. Luke Young had a go from just outside the box, with a slight deflection only taking it just wide of James’ right post.

Moments later, Elliott Durrell had a strong effort from distance which was simple enough for James to gather. Wrexham certainly started the stronger team.

Alfy Whittingham picked up a knock quarter of an hour into play, and after attempting to carry on for a few minutes, the midfielder was eventually replaced by James Rowe in the 20th minute.

Wrexham had another opportunity in the 25th minute, Paul Rutherford got up to flick on a good cross. Fortunately from an Aldershot perspective, it went past the post and Kwame Thomas wasn’t able to get onto it at the back post either.

Thomas also used his head in the 32nd minute, but couldn’t get over the good cross to the back post, as he saw his effort go harmlessly over the bar.

Young managed to test James with a free kick in stoppage time at the end of the half, the player on loan from Middlesbrough tipping over the bar smartly.

Aldershot finally forced a save from Rob Lainton three minutes inside the second period. Panayiotou was played through on the left-hand-side before shifting it onto his left foot and firing across goal. The Wrexham goalkeeper got down well to his left to parry and avoid any attacking players going for the rebound.

Three minutes later, Lainton made another vital save, somehow denying Bettamer with his foot on the line after the Libyan won a header at the back post from a corner.

Despite the strong start to the second half, the home side did take the lead through Young in the 64th minute. Left-back Jamie Reckford laid it back for the midfielder about 20-yards from goal who struck it sweetly through a few bodies into the near post, leaving James unmoved.

Just inside the last ten minutes, Aldershot looked to find an equaliser by piling the pressure on in various half chances, but the hosts defended well.

Bettamer almost found the target with 2 minutes to play, but his strike from outside the box went just past the right post.

James prevented Wrexham getting a second a minute later when a deflected cross from Durrell made the goalkeeper flick it over the bar. 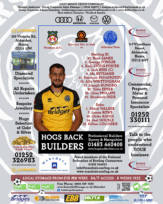