Ricky Miller’s debut winner claimed Aldershot Town’s fourth consecutive win at the Laithwaite Community Stadium as the Shots do the double over fierce rivals Woking in the National League.

Toby Edser’s cross was flicked past Ross in the Woking net by substitute Miller who returns from injury with his first goal for Aldershot.

The first opportunity fell to Aldershot when Harrison Panayiotou brought down a long ball from midfield and got his half-volleyed effort off early but Craig Ross saved comfortably.

The game started to get heated when there was an altercation between Jamar Loza and Lyons-Foster. Lyons-Foster’s heavy challenge wasn’t received well by Loza and the Woking striker was booked for a push on Lyons-Foster.

Aldershot came close again when Panayiotou was inches away from getting on the end of Nathan Collier’s headed attempt back to the keeper but Ross was quick enough to avoid a moment of embarrassment for the Woking centre-half.

Woking had opportunities to open the scoring when Shadrach Ogie was dispossessed before Josh Davison was sent through on the right, hitting his effort goalwards but it was well-held by Walker. Loza also had a chance but again it was a comfortable save for Walker.

Whittingham was the next Aldershot player to have an excellent opportunity to get the first goal of the game. Mo Bettamer and Panayiotou combined on the right-hand side with Bettamer crossing to an unmarked Whittingham who had his headed effort denied by the far post.

The momentum was in the favour for Aldershot who were pressuring Woking’s defence throughout the second half and they were starting to take advantage of their dominance with the hosts struggling to create chances.

20 minutes from time, substitute Miller had the best chance of the game for the Shots when Toby Edser’s cross wasn’t dealt with properly and the ball fell nicely to Miller but his half-volley was superbly saved by Ross who was becoming a problem for Aldershot.

The pressure paid off for Aldershot moments later when Miller grabbed his goal off the bench on his debut. Edser’s free-kick was fired into the box and the ball was flicked goalward by Miller and the ball deflected past Ross to send the Aldershot bench into raptures.

Aldershot almost doubled their lead when a great move down the left saw Josh Rees through from a tight angle but Ross saved smartly at the near post. Rees came close again when Panayiotou and Edser played a wonderful one-two before Rees fired just wide of the post.

The resolute Aldershot defence held their one-goal lead to secure the double over Woking this season and gain their fourth consecutive win at the Laithwaite. 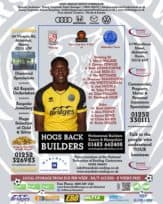