A dominant away display from Aldershot Town as they brushed aside Weymouth FC thanks to a Harrison Panayiotou header and a Josh Rees brace at the Bob Lucas Stadium in the National League.

Rees sealed his double with a close-range tap in to cap off an excellent away performance from the Shots.

Looking to build from our win against Dagenham & Redbridge, Danny Searle made three changes to the starting lineup ahead of our away game against Weymouth FC. George Fowler and Kodi Lyons-Foster come in for Alfy Whittingham (knee) and Giles Phillips who returned to parent club Wycombe Wanderers after his return for a one-month loan spell ended. Chike Kandi returned from an eye injury to start whilst Craig Tanner returned to the first team for the first time since November!

Aldershot Town had the first opportunity of the game when captain Jamie Sendles-White lofted the ball to Toby Edser who headed the ball to Harrison Panayiotou who was unlucky not to score as his effort bobbled wide of the near post.

Edser was involved again when he played the ball to Josh Rees in midfield whose reverse pass beat the Weymouth defence and found its way to Panayiotou for his second opportunity in 10 minutes but his effort was blocked before the linesman flagged for offside.

Edser was having a big impact for the Shots in the opening 15 minutes of the game and he came close to grabbing the opener when a brilliant bit of skill left the defender for dead before his curling effort went wide of the far corner.

Shortly after, Aldershot Town came close again as Ethan Ross’ poor clearance found its way to Rees who played through Joel Nouble but the Weymouth keeper made up for his error, producing a good save to deny the forward.

Panayiotou and Nouble were causing trouble for the Weymouth defence as Panayiotou was sent through again but could only fire over the bar before Nouble found Fowler moments later as the full-back also fired over the bar.

Moments later, Ross was there to deny Panayiotou again as Kandi chased down a ball from Nouble and the Weymouth defender’s clearance deflected off of Kandi into the path of Panayiotou but Ross saved well to keep the game goalless.

Aldershot Town’s first-half dominance paid off when they took the lead just over 10 minutes before the interval. A brilliant cross from Nouble found Rees who rose the highest to head home over the top of Ross who couldn’t dent the Shots that time as they took a deserved lead.

Aldershot Town almost doubled their lead when Nouble’s cross nearly found Jermaine Anderson but a last-ditch header from the Weymouth defender took the ball off the foot of Anderson as he prepared to shoot at the back post.

Weymouth were struggling to create any clear-cut chances with the Shots dominating the half but the Terras applied some pressure on the Aldershot Town defence when an effort was deflected wide of the post before the second corner was cleared away by Aldershot Town.

Just after half-time, Weymouth nearly equalised when Ben Thomson released Sean Shields who ran clean through on goal but Mitch Walker stood his ground expertly and saved from a one-on-one situation before Aldershot Town were able to clear.

Weymouth rued their missed chance as Aldershot Town doubled their lead through Panayiotou who had been unlucky not to score earlier. Shadrach Ogie passed the ball to Kandi whose cross fell to Nouble who picked out Panayiotou to take his chance well, heading home past Ross.

The third almost came moments later when Rees’ shot from outside of the area deflected into the path of Panayiotou after a small scramble in the box but Ross was there to gather the ball as the forward looked to shoot.

The hosts nearly halved the deficit just minutes later when the initial corner was cleared before the cross found Thomson who headed goalwards but Kodi Lyons-Foster did brilliantly to block the header.

Searching for the third on the counter-attack, Nouble raced through the middle of the park with the ball before releasing Edser who had his shot deflected behind for a corner. The corner came in and Sendles-White’s free header went over the bar.

Craig Tanner returned to the pitch for the first time since November and he was a bright spark in the final third for Aldershot Town, producing two efforts on goal that were saved by Ross as well as providing a threat in the final third.

The threat on the counter-attack was fierce from the Shots and it played a big part in grabbing their third through Rees. Anderson ran from midfield before passing the ball to Rees who produced a roulette to beat his man but the ball fell to Anderson whose effort was saved by Ross before Rees rebounded home for his second of the game.

In injury time, Aldershot Town had a free-kick that hit the bar from about 25 yards out but the Shots remained comfortable winners with a dominant away display. 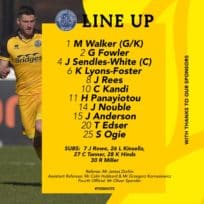