A five-star performance from Aldershot Town secured a 4th round place in the FA Trophy against Welwyn Garden City at Herns Way.

It was Aldershot Town who got the advantage first through Mike Fondop who converted from the penalty spot after being fouled in the area by a Welwyn defender before Finney doubled the lead heading home at the back post.

The game was out of reach for Welwyn when Shadrach Ogie hit another screamer from distance before Mo Bettamer tapped home into an empty net. Jordan Kinoshi got a consolation goal for Welwyn before Chike Kandi rounded off the win with a volley from close range.

Aldershot had the first opportunity when skipper Sendles-White lofted the ball to Fondop who attempted a bicycle kick which came close to opening his account for the Shots.

Shortly after, Kandi produced a good save from Charlie Crowley and Joel Nouble was agonisingly close to getting his foot on the rebound. Finney was the next player to come close to breaking the deadlock when he couldn’t bundle the ball over the line but the scoreline wasn’t goalless for long.

Aldershot’s hard work prevailed when Fondop earned a penalty minutes later. Fondop stepped up to convert the penalty sending Crowley the wrong way and grabbing his first goal for Aldershot.

Sendles-White came close to doubling the lead for Aldershot when his attempted volley went narrowly over the bar before Finney denied an opportunity for Welwyn Garden City.

Just 10 minutes after the interval, Finney grabbed a second for Aldershot with the centre-back rising high at the back post to head home after a wonderful cross by Kandi.

Welwyn came close again with an opportunity to get a goal back for the hosts but Mitch Walker did brilliantly to save from a one-on-one situation.

The game was dominated by Aldershot again and Shadrach Ogie put the game beyond doubt with another screamer as his driven effort from distance beat Crowley in goal. That’s two in two now for the Irishman.

Bettamer got Aldershot’s fourth when Fonfop raced clear on goal and squared the ball to the Libyan forward who tapped home into an empty net.

Welwyn did get a goal back through Jordan Kinoshi who beat a few Aldershot players before slotting past Walker to grab a consolation goal for the Citizens before Kandi rounded off the victory with a volley to secure a fourth round spot for Aldershot in the FA Trophy. 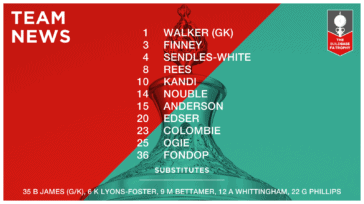