Goals from Joel Nouble, Jermaine Anderson, Chike Kandi and captain Josh Rees secured a win for Aldershot Town in a seven-goal thriller against Wealdstone FC at Grosvenor Vale in the National League.

Joel Nouble got his first goal of the season with a close-range strike for Aldershot Town before Dennon Lewis curled beyond Mitch Walker for the equaliser.

Alex Dyer put Wealdstone in front before Jermaine Anderson equalised after confusion in the box. Chike Kandi helped to regain Aldershot Town’s lead with a low finish past Stuart Moore before Rees scored the winner with a smart finish into the near corner.

Moses Emmanuel scored a penalty to set up a nervy end to the game but the Shots held out for the victory.

Aldershot Town had the first opportunity of the game when Mo Bettamer ran from the middle of the pitch and fired a long-distance effort to test the palms of Moore before he fired his next chance over the bar from a free-kick.

The early pressure from Aldershot Town paid off when Kandi and George Fowler linked up well on the right-hand side to pick out an unmarked Nouble who had time to fire beyond Moore for his first goal of the season.

Aldershot Town almost got their second when Bettamer’s diagonal pass found Kandi whose shot-cross almost caught out Moore at the near-post before a barrage of corners for Aldershot Town put pressure on the Wealdstone defence.

Out of nowhere, Wealdstone got the equaliser through Lewis as Wealdstone counter-attacked and the ball found its way to Lewis who cut inside on his right foot and curled it beyond Walker. Lewis had another chance to score moments later but his shot went over the bar.

Wealdstone were piling on the pressure and they almost took the lead when Dyer found Daniel Green who thought he had scored but heroic defending from Alex Finney denied a goal for the hosts. The pressure paid off moments later when Wealdstone took the lead. A cross from the right-hand side found Dyer who side-footed into the far corner.

Aldershot Town came close to equalising when Nouble produced some great skill on the right-hand side to cross to Betttamer who tried to catch out Moore at the near post but his strike hit the side-netting. Bettamer came close again when he cut inside onto his left foot and produced a smart save from Moore.

The pressure paid off the Shots when they equalised shortly before half-time. Toby Edser crossed from the corner and a bundle in the box saw the ball fall to Anderson who smashed home despite shouts from the Wealdstone players claiming that the ball had not crossed the line.

Moments later, Aldershot Town regained their lead. Nouble picked the ball up on the left-hand side and picked out Kandi after some lovely trickery and Kandi made no mistake firing low beyond Moore.

Moments after the interval, Aldershot Town nearly doubled their lead when Nouble cut inside onto his right foot and fired towards the near post hitting the woodwork. Shortly after, another chance came for Aldershot Town when Bettamer’s free-kick went wide of the far post.

Kandi, Anderson and Bettamer were denied moments later by a set of unbelievable saves from Moore who produced a triple save to stop Aldershot Town from doubling their lead. Wealdstone also came close but Walker reacted well to deny Moses Emmanuel a chance on goal.

Fowler was the next player to be denied by Moore who was having a great game in goal for Wealdstone. The ball was worked well in the box to Fowler whose powerful shot could not beat Moore with the keeper tipping the ball away from goal.

The pressure from Aldershot Town paid dividends when Fowler’s cross picked out Bettamer who passed the ball back into the area to find Josh Rees and the captain smashed home into the near corner. Shortly after, Wealdstone got a penalty after a foul from Alex Finney with Emmanuel converting from the spot to set up a nervy finish.

Wealdstone applied late pressure onto the Aldershot Town defence but they stayed resolute and held out for the win to make it three consecutive victories in all competitions for Aldershot Town. 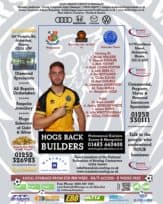