Despite the equaliser from Kodi Lyons-Foster, a last-gasp header from Scott Boden secured the win for Torquay United after a valiant Aldershot Town display at Plainmoor in the National League.

Torquay skipper Asa Hall opened the scoring with a volley from inside the box before Lyons-Foster equalised with a wonderful header into the far corner.

Torquay regained their lead with an injury-time winner from Boden as the Gulls remain at the summit.

Looking to build on from our win against Wealdstone FC, Danny Searle named an unchanged starting eleven as Mo Bettamer comes in for James Rowe on the bench.

Within the first minute, Torquay came close to grabbing the opener when Billy Waters got ahead of Lyons-Foster before he descended onto the Aldershot Town goal but Mitch Walker saved smartly to deny an early setback.

Early pressure from the hosts paid off when they took the lead in the 12th minute. Good work from Boden kept the ball alive to get the ball to Waters who played the ball through to Adam Randell to set up Hall for a thumping volley from inside of the penalty area to give the league leaders an early lead.

A few minutes later, Aldershot Town equalised from the run of play when Lewis Kinsella’s free-kick found an unmarked Lyons-Foster who had the freedom of Devon in the penalty area to head home into the far corner.

Torquay had an opportunity to regain their lead when Ben Wynter set up Randell for a long-range effort that was parried away by Walker before Jake Andrew’s rebound went well over the bar.

Just after the interval, Torquay came close to taking the lead again when the corner fell to Wynter whose effort deflected off of Gary Warren to force an excellent save from Walker for another corner before Warren rose highest to head over the bar.

Walker was there again shortly after to deny the hosts when a counter-attack from an Aldershot Town attack found Boden in a one-on-one situation with Walker but pressure from the defence and heroics from Walker denied Torquay yet again.

Minutes from time, substitute Bettamer had an opportunity to take the lead for Aldershot Town but both of his efforts were blocked by Torquay defenders before Aldershot Town hit them on the counter-attack with substitute Chike Kandi finding the head of Toby Edser but Lucas Covolan held well.

The controversy came in injury time when Connor Lemonheigh-Evans had allegedly been fouled by Walker after his effort had gone over the bar but the referee consulted with the linesman and decided to reverse the decision and overturn the penalty.

However, Aldershot Town’s efforts were undone in the dying seconds of the game when Randell crossed into the box to find Boden whose glancing header looped into the far corner to secure all three points as Torquay maintain their position at the top. 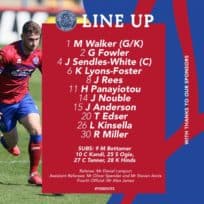