Sutton got the opener in the ninth minute through Donovan Wilson’s volley before Ricky Miller scored a rebound in the 21st minute.

Coby Rowe headed home from a corner just before the interval before Isaac Olaofe scored from close-range to give the hosts a two-goal lead.

Sutton started the better of the two teams and got their opener in the sixth minute when a headed clearance from Kodi Lyons-Foster fell to the feet of Donovan Wilson who arrowed his half-volley into the far corner.

Sutton came close to doubling their lead when David Ajiboye cut inside and ran across the box before firing narrowly wide of Mitch Walker’s near post.

Quickplay from Aldershot Town in the middle of the park earned their equaliser in the 21st minute starting with Goerge Fowler who played the ball to Josh Rees who played the ball out wide to Joel Nouble who crossed to Ricky Miller and after a great save from Dean Bouzanis from close range, Miller scored the rebound.

Aldershot Town came close to taking the lead when Lewis Kinsella’s free-kick was initially cleared before Rees’ flick set up Toby Edser for the half-volley which deflected narrowly wide of the near post into the side-netting. The corner came in and found its way to Miller who in a similar fashion to his first goal, smashed home but he was flagged for offside.

Aldershot Town came agonisingly close to taking the lead when a brilliant one-two with Fowler and Rees sent Rees through on the right-hand side with Rees cutting the cross back to Jermaine Anderson whose goalbound effort was cleared off the line.

On the stroke of half-time after a period of dominance, Sutton regained their lead when the corner came in and found the head of Coby Rowe to head home.

After half-time, Aldershot Town came close to the equaliser when Nouble’s cross found the head of Edser who headed the ball across to Harrison Panayiotou and great defending from Louis John denied Panayiotou the chance to fire home from close-range.

Moments later, Aldershot Town had another opportunity when Kinsella’s cross found the head of Rees who just couldn’t keep his header down before Sutton went up the other end with Walker denying Ajiboye’s goalbound effort with a fantastic save.

Aldershot Town rued their missed chances when Sutton doubled their lead through Isaac Olaofe. Ajiboye beat his man before crossing and Omar Bugiel’s header was blocked with a combination of Lyons-Foster and Walker before Olaofe smashed home from close-range.

Aldershot Town tried to get back in the game late on but Sutton held on and secured all three points. Sutton remain second in the table whilst the Shots drop down to 14th. 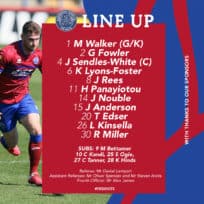