Mitch Walker saved a penalty late on as the keeper’s heroics earned Aldershot Town a crucial away point against Stockport County at Edgeley Park in the National League.

The Aldershot Town defence were solid throughout the game with Walker contributing heavily with a good penalty save to deny John Rooney a chance to grab a late winner for the hosts.

After the cancellation of the Buildbase FA Trophy fifth-round tie against Chesterfield, Danny Searle looked to build on from their 2-1 win against Barnet last Tuesday by making one change to the starting lineup. Good scoring form earned Mo Bettamer a starting place with Harrison Panayiotou dropped to the bench.

The opening 15 minutes of the game were tight between both sides with Joel Nouble providing a threat on the left-hand side. The hosts had a few half-chances but no clear opportunity in the game had come to fruition.

A chance came for Aldershot Town shortly after when Nouble broke free of his man in midfield and attempted a curling effort that rose over the bar. Stockport had a chance of their own moments later when Lois Maynard ran from defence and beat his man before firing wildly over the bar from range.

Aldershot Town started to show more in the attacking third but they could not create a clear cut chance that would breach the Stockport defence. Nouble and Jermaine Anderson linked up on the left-hand side but Nouble could not get his shot off and Stockport cleared their lines.

Just after the interval, Stockport had a double chance with John Rooney and Bennett coming close to grabbing the opener. Rooney shoots from a tight-angle with Mitch Walker holding onto his effort before Bennett somehow missed the goal from just a few yards out.

With five minutes to go, Stockport were given a penalty when Gillela was deemed to have handled the ball in the area. Rooney stepped up and Walker was there to save to his right-hand side to deny Rooney yet again.

Stockport piled on late pressure but the Aldershot Town defence stayed resolute and picked up a vital point away from home. 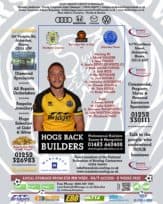