A tough result to take as 9-men Solihull Moors condemn Aldershot Town to two defeats this week thanks to a first-half Cameron Archer finish at the SportNationStadium in the National League.

Solihull opened the scoring through Cameron Archer who slotted calmly beyond Mitch Walker. In a game that finished 1-0 to the hosts, that wasn’t the last of the drama as Mitch Hancox and James Ball were also sent off for the hosts.

Looking to build from our defeat to Chesterfield FC, Danny Searle made two changes to the starting lineup ahead of our away game against Solihull Moors. Mo Bettamer and Harrison Panayiotou dropped to the bench with James Rowe and Ricky Miller making their returns to the starting line-up. Shadrach Ogie earns his second consecutive start in the National League.

The first big chance of the game fell to the hosts with Callum Maycock finding some space in the box before he scuffed his effort inside the area before Kodi Lyons-Foster was able to clear Aldershot Town’s lines.

In the opening 30 minutes of the first half, the game was closely contested between both sides as neither side could find a clear breakthrough or create clear-cut chances with both defences resolute in denying either side any attacking advances.

Shortly after, Solihull found a gap in the Aldershot Town defence when Ball’s through-ball behind George Fowler found Archer who cut inside Lyons-Foster and slotted past Walker to give the hosts the lead.

Just before the interval, Solihull came close to doubling their lead when Ball almost grabbed his second assist when he played through Archer who had space in behind the defence but the forward dragged the ball just wide of the far post, coming close to grabbing his double.

Aldershot Town came close to equalising with 30 minutes remaining when Toby Edser played a short corner to James Rowe who crossed towards Lyons-Foster but the centre back’s header was blocked before Josh Rees’ shot was also blocked.

Solihull came close to doubling their lead again when Maycock played through Ball who had a chance to add a goal to his assist but Walker was there to save at his near post. Walker’s save encourages a counter-attack for Aldershot Town when Edser broke away from our area before a misplaced pass from Jermaine Anderson ended the move.

Moments later, Hancox received his second yellow card of the game after a late foul on Joel Nouble and Solihull were left to play the last 15 minutes of the game with 10 men.

Aldershot Town continued to push for a late equaliser and they were getting closer but couldn’t find a gap in the Solihull defence to get a shot off before substitute Chike Kandi’s cross down the left byline went out for a goal kick.

In a bid to grab a late equaliser, Fowler was brought off for substitute Panayiotou as Aldershot Town changed to a more attacking lineup to pressure the Solihull defence.

The discipline of Solihull seemed to be getting worse as the hosts went down to nine men. An altercation between Phillips and Ball influenced the referee to send Ball off after he appeared to have struck Phillips.

Just before injury-time, the free-kick came in from the left and the ball was cleared out to Kandi whose volley was inches wide of the far post and certainly would’ve put himself in the goal of the season contenders list if his shot had gone in.

Aldershot Town piled late pressure on the Solihull defence but the hosts held out for a win that sees them rise to 17th whilst the Shots fall to 16th. 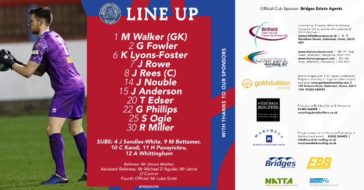