Aldershot fell to defeat on the opening day of the new season to a sharp Solihull Moors side. Joe Sbarra opened the scoring and Inih Effiong equalised for The Shots but goals from Callum Howe, Andrew Dallas and Ben Coker earned the visitors a deserved victory.

The Shots looked bright from the start and new man Ryan Glover looked raring to go. A fantastic ball forward from Kodi Lyons-Foster found the winger out on the left but after beating his man and finding space in the box, his centre to Inih Effiong was cleared.

The visitors’ first chance came through a Ryan Barnett shot from outside the box but Luca Ashby-Hammond was able to smother the rather tame effort.

Solihull took the lead through Joe Sbarra in the 15th minute. Receiving the ball in the box, his first shot was blocked but he was able to finish on the second attempt beating Ashby-Hammond with a powerful close-range strike.

The Shots were happy to let Solihull keep the ball as they rarely looked to threaten the home goal and instead opted to hit their opponents on the break. And they did just that to devastating effect in the 27th minute.

Ollie Harfield found plenty of space down the left wing and his cross was met by Effiong who headed home and opened his account for Aldershot.

But, The Shots lead would last just three minutes. Callum Howe restored The Moors’ advantage as he rose highest in the box and his header beat Ashby-Hammond.

Solihull were pushing for a third and out of the two sides looked more likely to add another goal before the break as Andrew Dallas forced a good save from Ashby-Hammond in the 40th minute after being well fed through.

But, Aldershot were dangerous on the counter and almost found another equaliser through such method. Effiong led a charge into the Solihull half and played in Glover who had almost the freedom of The EBB ahead of him. He beat a couple of defenders with a cut inside and his shot which appeared to be going in was blocked on the line. 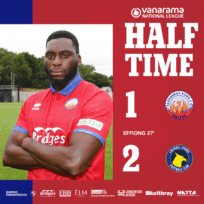 It didn’t take long to see a goal in the second-half. The visitors found a third just two minutes in through Andrew Dallas.

Effiong continued to look dangerous for The Shots and came close to getting his side back into the game with a powerful strike just a minute after they conceded. However, Louie Moulden in the Solihull goal stood firm and made a good save.

Solihull were happy to sit on their two goal advantage but their threat going forward failed to diminish. Alex Reid found himself with loads of space after a mix up between two Shots defenders but couldn’t beat Ashby-Hammond just after the hour.

But The Shots opening day misery was furthered when Ben Coker scored a very well-taken free-kick in the 67th minute. From just outside the box, the left-back curled it in to the top corner giving Ashby-Hammond almost no chance.

With a dominant advantage, Solihull were happy to see the game out. Mark Molesley made a couple of attacking changes in the hope of sparking life into his side but to no avail as Aldershot suffered a heavy defeat to start the season.