Harrison Panayiotou’s early penalty was enough to secure a vital away win against Notts County as Aldershot Town came away from Meadow Lane with a league double over the hosts in the National League.

Aldershot Town opened the scoring after just four minutes when Panayiotou was brought down in the penalty area before converting from the spot and that was enough to secure a vital away win for the Shots.

Looking to build from our defeat to Solihull Moors, Danny Searle made four changes to the starting lineup ahead of our away game against Notts County. Alex Finney, Jamie Sendles-White, Chike Kandi and Harrison Panayiotou come in for Ricky Miller, James Rowe, Kodi Lyons-Foster and George Fowler. Lewis Kinsella returns to the first-team on the bench after suffering from a long-term injury for just over a year whilst Shadrach Ogie earns his third consecutive start in the National League.

Aldershot Town came firing out of the blocks and they got the lead with just three minutes gone. Toby Edser turned brilliantly to beat his man and play through Panayiotou who was brought down in the area by Mark Ellis with referee Thomas Parsons pointing to the spot.

Despite claims from the Notts County defender for a dive, Parsons ignored Notts County’s disapproval and St Kitts and Nevis international Panayiotou stepped up to smash home down the middle of the goal, converting an early penalty for the Shots.

Minutes later, Notts County had a chance to equalise when Kyle Wootton did brilliantly to head the ball down to Calvin Miller, who under pressure from the Aldershot Town defence, fired wide of the goal from about 20 yards.

Shortly after, Panayiotou had an opportunity to add to his converted penalty early on when he gathered the ball from outside of the box before hitting a side-footed effort from distance that went wide of Sam Slocombe’s near post.

Panayiotou was tormenting the Notts County defence and he was so close to securing his double when Shadrach Ogie’s long throw was headed down to Panayiotou whose wonderful left-footed volley cannoned off the crossbar.

Notts County struggled to create chances and break through the resolute Aldershot Town defence until they were able to work the ball to Wootton who saw his shot blocked.

Shortly after the interval, Joel Nouble came close to doubling Aldershot Town’s lead with Jake Reeves being dispossessed by Nouble after running into trouble and the winger’s close-range effort was smartly saved by Slocombe.

Aldershot Town were getting closer and closer to a second as Ogie’s cross caused trouble in the Notts County area when Giles Phillips rose above his marker but his header was comfortably saved by Slocombe before Josh Rees’ effort from outside of the area was blocked a few minutes after.

Notts County had two chances in quick succession to equalise late on through Jimmy Knowles. Knowles was sent through on goal before Walker brilliantly saved his low effort with his feet before Ben Turner went long to Inih Effiong who headed down to Knowles who could only fire into the side-netting.

In the dying embers of the game, Aldershot Town were agonisingly close to doubling their lead when Mo Bettamer flicked the ball into the path of Rees who was clean through on goal but Slocombe was there to tip Rees’ shot round the post but it didn’t matter as Aldershot Town secured a league double over Notts County. 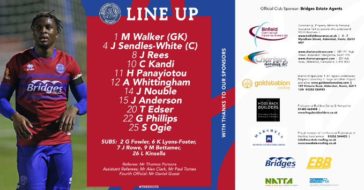