The midfielder netted a first-half brace after Ricky Miller’s early finish, but goals from either side of
half-time from Danilo Orsi threatened the three points until Rees rounded off the win with a sublime
finish in added time.

There was only one change made from Saturday’s comfortable win over Wrexham as Giles Phillips
replaced Ben Shroll to make his return to Aldershot Town from Wycombe Wanderers on loan.

The visitors started the game with more confidence in attack and Miller wasted little time in
testing Taye Ashby-Hammond, forcing the goalkeeper to parry a dangerous free-kick only moments
into the fixture.

The forward continued to press and was rewarded in the sixth minute by finding the opener. Rees’
downward header fell to Chike Kandi in the heart of midfield before he slipped through Miller to find
the bottom corner with ease.

Maidenhead responded and thought they had levelled the score when Nathan Blissett smothered
the ball in following Josh Coley’s corner, but the goal was ruled out for a foul committed in the
process.

Coley then threatened with a sharp half-volley which was held well by Mitch Walker but it was the
Shots who extended their lead after Rees’ low-driven strike from 20 yards whistled past Ashby-
Hammond and into the bottom corner to make it 2-0.

Phillips came close to adding a debut goal and Aldershot Town’s third after seeing his looping header
desperately scooped off the line.

But the half went from bad to worse for the hosts when Joel Nouble latched onto Killian Colombie’s
pass before picking out Rees for a simple tap-in and his second of the game.

Maidenhead pulled a goal back moments before the break as a lofted ball forward found Orsi, and
the striker calmly chipped Walker to give his side hope heading into the interval.

Orsi began the second half as he finished the first by bagging his brace early into the restart. George
Wells’ curling free-kick evaded the Shots wall before cannoning off the post and falling to the feet of
Orsi to make it 3-2.

Aldershot Town retaliated by looking to restore their two-goal cushion almost immediately. Miller tricked
his way through the Maidenhead back four before being brought down, but the referee waved play
on to leave the Shots bench bemused.

Despite the disappointment of being pegged back, the Shots maintained a high-intensity press with
hopes of extending their lead once more. Nouble, who caused countless issues for the Magpies
down the left-wing, met James Rowe’s corner but his header was guided wide of Ashby-Hammond’s
near post midway into the half.

The game took another twist when the visitors were reduced to ten men. Colombie was given his
marching orders in the 72nd minute after bringing down Coley on the edge of the box for his second
yellow card.

Manager Danny Searle turned to his bench to fill the defensive gap with Kodi Lyons-Foster brought
on for Miller with the intention of holding out for three crucial points.

The hosts applied more pressure through Coley but Rees eventually rounded off the victory after
picking up the ball from Alfy Whittingham and lashing his shot past Ashby-Hammond in additional
time.

The win marks Aldershot’s second in a week and the result sees the club leapfrog their opponents
into the top half of the table approaching Saturday’s FA Trophy clash with Hereford. 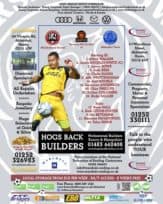