An eight-goal thriller at the Walks Stadium as both sides played out an entertaining encounter with King’s Lynn Town securing a late point against Aldershot Town as the National League 2020/21 season draws to a close.

Toby Edser volleyed into the bottom far corner in the 20th minute before Chike Kandi calmly slotted the ball beyond the keeper.

Michael Gash halved the deficit with a chip over the keeper before Simeon Jackson converted from the penalty spot.

Aldershot Town regained their lead through Kodi Lyons-Foster before Jackson got his double with a curling effort. Lyons-Foster got his second of the game as well minutes later with a looping header from a free-kick.

In injury-time, Tai Fleming equalised with a header to rescue a point for King’s Lynn Town.

Looking to improve from our defeat against Bromley FC, Danny Searle named a few changes to the starting eleven with Mitch Walker returning to the starting lineup. Kaylen Hinds, Alfy Whittingham, Shadrach Ogie and Chike Kandi also came in with academy youngsters making the bench.

King’s Lynn Town started the better of the two teams and they nearly went ahead in the early stages when Alexander Babos’ squared the ball to the feet of Gash who somehow put his effort wide of the mark from close range.

Aldershot Town replied with a flurry of chances to take the lead when a series of efforts from Mo Bettamer and Craig Tanner were blocked inside the penalty area before Harrison Panayiotou looked to shoot but couldn’t connect well with his effort and King’s Lynn were able to gain possession.

Shortly after, a brilliant solo run from Sonny Carey opened up the Aldershot Town defence before testing Walker in goal with a low effort that was expertly parried away from danger as Aldershot Town were able to get the ball up the pitch.

Twenty minutes into the first-half, Aldershot Town took the lead when Kandi laid the ball off to Lewis Kinsella who crossed first-time into the penalty area to find an unmarked Edser who calmly volleyed into the bottom corner.

King’s Lynn Town came close to equalising when Carey was sent through on the right-hand side where he had the option to square the ball to Gash for a tap-in but opted to go for goal but Walker was there to gather the ball from his feet.

King’s Lynn Town were pushing for the equaliser but they were punished when a pass was intercepted by Kandi who raced clear on goal to cooly slot the ball home into the far bottom corner showing great composure to beat Theo Richardson in goal.

Shortly after, King’s Lynn Town got a goal back through Gash as a ball was played over the top of the Aldershot Town defence and Gash patiently waited for the ball to come down before chipping over the head of Walker into the back of the net.

Shortly after the interval, King’s Lynn Town got a penalty when Michael Gyasi ran in-between two Aldershot Town players before allegedly being pushed to the ground. Jackson stepped up and converted into the left corner.

Moments after the penalty, Aldershot Town regained their lead when George Fowler hit a long free-kick into the box and Bettamer headed the ball down to Lyons-Foster who side-footed the ball underneath the keeper on his weaker foot.

Again, Aldershot Town were pegged back and their lead was a short one when King’s Lynn Town equalised. A long ball over the top found Jackson who had his effort blocked by Lyons-Foster before regaining the ball and firing into the far corner to get his second of the game.

Minutes later, Lyons-Foster got his second of the game when Kinsella’s free-kick found the centre-back who leapt highest to loop his header over the head of Richardson and into the back of the net.

Aldershot Town had an opportunity to double their lead when substitute Reece Miller read a backpass from a King’s Lynn Town defender well before firing at goal but his deflected effort looped narrowly over the bar.

In the dying minutes of the game, Fleming equalised for King’s Lynn with a header from a corner to rescue a point for the hosts, ensuring that they finish above bottom in the National League whilst Aldershot Town finish in 15th place for the 2020/21 season. 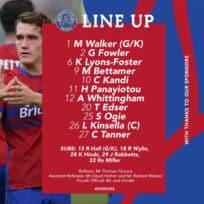