Aldershot and Havant and Waterlooville drew blanks as their pre-season campaigns came to a close in fairly uneventful circumstances.

The Shots took a little while to get into the pace of the game with Havant looking energetic in the opening exchanges. James Roberts and Jason Prior both had early efforts at the Aldershot goal but Luca Ashby-Hammond was in no real danger of being tested.

Aldershot’s first chance came in the 15th minute by the most unlikely of sources. Corey Jordan saw some space and burst through the Havant and Waterlooville midfield before finding himself also bursting through their defence before unfortunately failing to keep his shot down.

Just a minute later, Inih Effiong found space in The Hawks box after a very neat move by The Shots but his chipped cross grazed the crossbar and evaded Tommy Willard at the far post before danger was cleared.

It was then Havant’s chance to come close a minute after that when Jake McCarthy made a trademark run from midfield but his shot brushed the side netting.

The next chance would also fall to McCarthy in the 24th minute. Joe Newton made a dart down the left and centred it to The Hawks midfielder but McCarthy, despite having found a lot of space in the box, couldn’t finish from close range.

Both teams began to take their feet off the pedal as the first-half went on but Havant came close again five minutes before the break. Paul Rooney squared the ball across the face of The Shots net but Prior couldn’t get there in time to finish at the back-post. 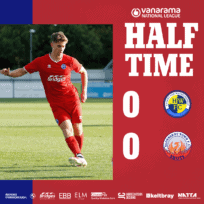 As seems to be the case with the majority of our pre-season games this campaign, most of the action came in the first-half. A quick check of our matchday Twitter feed will tell you the only action worth reporting was the substitutions!

Almost all of the second-half was played in the middle of the pitch with neither side managing to break through either defence. The closest The Shots came to breaking the deadlock was a break from Francis Amartey but his pass to release Inih Effiong was too late and the striker had strayed offside.

Havant’s introduction of Seok-Jae Lee seemed to revitalise their efforts as the former Portsmouth youngster twice came close. In the 80th minute he found space on the left-wing before blasting over the bar.

However, seven minutes later he came a lot close but this time, the crossbar denied him what would have been a very nice goal, cutting in from the left and unleashing from outside the box.