With Storm Alex around, it was Hartlepool United who come away with all three points after scoring late on in the second-half through Nicky Featherstone from the penalty spot.

Despite Aldershot Town’s relentless pressure, it was Holohan who popped up late on at the back post to head home from just a few yards and see Aldershot Town coming away with at least, a deserved draw.

With it being the first National League game of the 2020/21 season, Danny Searle gave a number of players their first league appearances for The Shots with captain Jamie Sendles-White, vice-captain Josh Rees, Joel Nouble, Toby Edser and latest signing Shadrach Ogie coming into the side to kick-off the new campaign.

It was The Shots who looked the most threatening of the two early on but Hartlepool come into the game after 10 minutes with captain Ryan Donaldson and Gavan Holohan causing problems that both Alex Finney and George Fowler defended well on.

Despite Aldershot Town’s response to this threat, their first real chance came in the 19th minute.

Midfielder Rees and Edser linked up well before looking for Mo Bettamer but Edser’s ball across to Bettamer was slightly behind him and Hartlepool were able clear the danger.

The game continued to be a real end-to-end encounter with Aldershot Town creating their next best chance 10 minutes later.

It was Bettamer who turned provider this time, as he played through Craig Tanner who saw his one-on-one brilliantly saved by Pools’ keeper Ben Killip, who got back up to turn behind Tanner’s cross too.

Unfortunately, the next best chance of the game came to the home side and would result in the game’s opening goal with Featherstone converting his penalty in the 36th minute.

There was still time in the half for Aldershot Town to push for an equaliser, with Edser almost finding Bettamer on two occasions in the 38th and 41st minute but the former’s pass was just slightly overhit and gathered by Hartlepool on both occasions.

The final chance of the half fell to Bettamer as Ogie’s long throw find the forward but after being crowded out by a number of Hartlepool defenders, the home side cleared the danger as referee Martin Woods blew the whistle for half-time.

Aldershot Town came out firing in the second-half and continued to press Hartlepool for that equaliser, which they would duly find in the 63rd minute through Tanner.

Edser picked up the ball down the left-hand side before cross-fielding the ball over to the onrushing Tanner who controlled the ball and deftly chipped it over the onrushing Killip in the Hartlepool goal for Aldershot Town’s opening goal of the 2020/21 campaign.

Following their equaliser, The Shots looked to find a winner and they nearly found it late on with Tanner whipping in a deep free-kick before he found the onrushing Rees but saw his sliding effort bounce off the post before being unfortunately called back for offside in the 78th minute.

But it wasn’t to be and instead it was heartbreak for Aldershot Town as even though they looked the more threatening of the two sides in the second-half, recent substitute Holohan popped up at the back post to head home a late winner in the 87th minute.

Despite bringing on the likes of Killian Colombie and James Rowe, Hartlepool saw out the game as Aldershot Town start 2020/21 with an unfortunate defeat, as Sutton United are out next opponents at home next Tuesday. 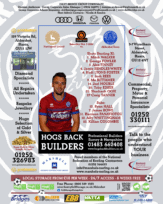